I can't tell you how many space marines I've built in the last 20 years. I love space marines.  There is just something about a genetically engineered 8 foot tall superhuman in power armor putting foot to ass that gets my blood going.  My first army was the Space Wolves. One reason was the cool illustration in Rogue trader mentioned in the last post, the other has to do with a personal connection to the animal.  They got me through the first few editions of Warhammer 40,000 as my chief army.  As time passed and the background of the 40k universe began to fill out I heeded the calls of the Dark Gods  the Hive Mind and the Waagh.  The overall theme, was assault armies.

Another of the Primogenator Chapters that appealed to me was the Raven Guard.  Jump packs and black armor, hit and run.  While waiting for a new Space Wolf codex (and having sold off my last space wolf army), I settled into the idea of doing a Raven Guard force, especially with the introduction of Captain Shrike to the loyalist Marine codex. The problem, as many who know me have identified it, is that I seem entirely incapable of leaving a miniature unconverted or can't just "paint it like it is in the book".  So my army would likely be a successor of the Raven Guard of my own making.  Then, Forgeworld started making decal sheets and I saw the Raptors in their drab green livery instead of the blue and yellow of the past. There were also illustrations from the Rogue Trader days of the "Raptor Legion" in various camoflages and I said "Hrrmmmmm, methinks I can get into that."  Thus, my version of the Raptors' 5th Battle company and a strike cruiser based force making a nuisance of themselves to the Waaghs of the Arch-Maniac of Calverna.

So, here's some work/painting in progress shots of the units which will form the foundation of the army.  Two 6 man razorback mounted Tactical squads (Squads II and III) are first up. 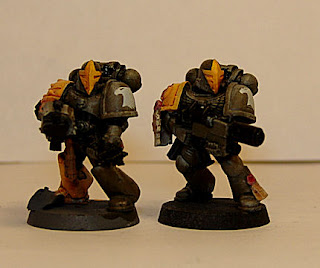 These are the sergeants. The base olive drab is heavily dry brushed with bleached bone at the moment which will get toned down with some washes. The yellow on the helmet harkens back to some markings from the Rogue Trader illustrations and I thought I'd bring some of the yellow from the traditional yellow and blue scheme to note the sergeants. Tactical troopers are all drab with white decal markings.  Lots of little details to do yet as well as weathering. 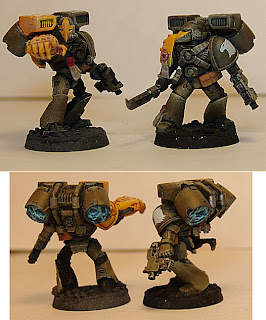 Yellow marks out the leaders again. These guys are close to done. All of the decals are on the whole squad, with squad numbers on the top of the jump packs etc.  There are still details to be done as well as weathering.

Here's a shot of the painting table.... there's still alot of work to be done. 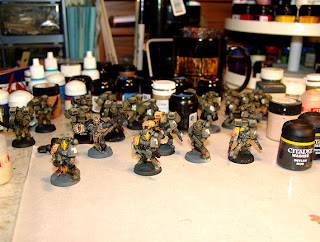 I've got plenty more marines to build. There will be an elite element to the strike force with terminators, vanguard and dreadnaughts.  I'd love to build the whole strike force, but I'm constantly coming up with new ideas I'd like to try, plus I have Orks,Chaos,Imperial Guard(Traitors) and more, so it remains to be seen how big the force will get.  I'll likely camoflage the footborne tactical and/or devastator squads, so it will be fun to see how this develops.

Lots going on here at the old homestead, but with my short work week beginning tomorrow and a 4 day "weekend" looming, there should be some great hobby stuff to share in the next couple days.  I'm working hard on getting my Raptor Space Marine force painted so they can make their online debut.

In the meantime, with the Grey knight codex looming on the weekend, I dusted off my Inquisition army to see what metal grey knights I had available.  I'll be picking up my codex this weekend.  I've been waiting for this one because along with the Space Wolves, the Grey Knights were always a favorite.

Here's the illustration that got me hooked on Warhammer 40,000. 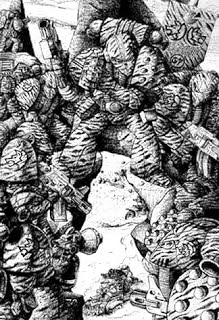 My impending Space Wolf army will have this camoflage thing going on.  This was the drawing that caught my eye and imagination and led to 20 years of hobby goodness.  Another illustration that caught my eye (as well as their backstory) 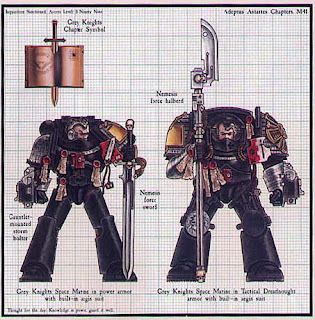 A bit different from the standard "shiny silver" scheme in the new book and likely to be the one my force will have, along with some purple and white heraldry, which fits with my loyalist "crusade army"

One more thing to share. The Dreadknight.  Right after I exclaimed "Good god! Godzilla and Megatron had a baby!"  I said.... "I MUST loot one of those for my Ork army."    Of course, I wasn't the only one with that idea....
http://www.the-waaagh.com/forums/?showtopic=48846
Good stuff!
Posted by Rednekkboss at 8:51 PM No comments:

I did a project recently that was "possessed Space Wolves" for a friend's Thousand Sons army.  It was alot of fun for me, since the project was simple "I need 9 of these guys by April, go nuts" The only restrictions, they had to be corrupted Space wolves, because the Thousand son's really don't like them much...and it would be delicious irony.  Here's the finished work. 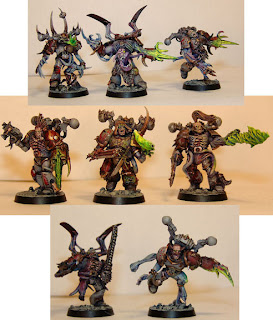 There are no commission projects on the near horizon, except painting some flaming Khorny deamons, so the next post will likely be some of my Raptors Space Marine army. The orks are calling to me as well and my Freebooter Kaptain needs a right arm.  I want to get my mitts on two Dark Eldar raiders for the Kaptain's "battlewagon"..... yeah, you read that right. Oooooooo what fun will be had.

We're not talking about the Jeff Foxworthy rednecks..or are we?  A couple years back I was trying to think of what Warhammer 40k army would be the most 'rednecky".  Granted, I live less than 10 miles from Walt Disney World, but if you point yourself away from the tourist traps, it gets "real country, real quick" in Central Florida.  Growing up around upstate New York rednecks and now surrounded by Florida rednecks, I felt the need to use some of what I saw in Warhammer.  And of all of the iconic races, the Orks fit the whole "making something out of whatevers at hand" theme that human rednecks exude. Not to mention that the army lends itself to cobbing stuff together or "lootin'" as the Orks would say.

Orks are a parody of humans. A violent,green, animalistic, grim-dark humor parody. There's almost no joke too bad for Orks.  The Dukes of Hazzard? Hee Haw? Nope, not off limits. The iconic General Lee? Maybe not a Dodge Charger....but how about a 12 foot tall piston driven apelike monstrosity bent on destruction? 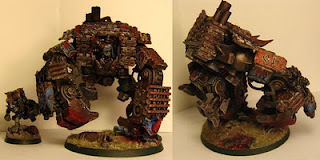 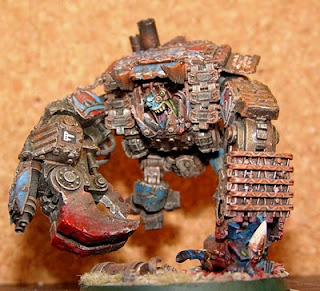 And what crazed genius would build such a thing? Why Koota', of course!

Koota will likely sound off on here, from time to time.  For the uninitiated, there will be occassional bursts of Orkspeak- in the case of the Rednekk Tribe, its likely to be a mish mash of the typical heavy English/scottish accent (from the folks at Games Workshop) and the glorious southern American English accent.  Hopefully, its legible (I'll try my best)

While the growth of Da Genrul's Waaagh is the main focus of the blog, there will be plenty of other Warhammer 40,000 goodness.  For those unfamiliar (if any) you can always refer to the Warhammer basics at Games Workshop's website or the fan-made wiki - http://wh40k.lexicanum.com/wiki/Main_Page 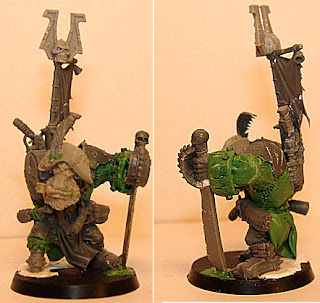 Here's a work in progress shot of one of Da Genral's main allies. He's still got a ways to go and that berserker helmet on his backbanner is gone in favor of a skull or two.

Thanks for lookin'. Much more to come.
Posted by Rednekkboss at 11:39 AM No comments:

An Introduction of sorts...

This blog is a creative outlet to share my modeling, art and hobby stuff.  I was first exposed to the warhammer 40,000 universe by a friend (who was later my roommate) in college back in the early 1990's.  I loved its mix of classic fantasy with science fiction. Orks in space?!? Hell yeah! Beneath all the fun, there were also some serious human elements.  The temptation of Chaos, the utter faith in the Emperor. It was all very fascinating to a recovering D&D addict.  The backstory was the bait, but the hook was the models.

I built my first model kit (the USS Missouri) when I was 8 years old.  By the time I had gotten to college, I had literally build over a hundred models of ships, planes and tanks.  I got to play with them as a kid, but nothing like a real wargame.  They went from toys to targets as I grew older. I grew up in an old farm house, hunting and fishing- and old battleships slathered with glue by an 8 year old, make fun things for target practice 8 years later.

40k had wormed its way in during college and became firmly entrenched afterwards.  I also began building models again, but this time with an actual IPMS model club.  My aforementioned college roomate and I began competing and judging models at IPMS/AMPS contests in upstate NY and PA.  My painting and building skills grew by leaps and bounds, all of which had their effect on Warhammer. I think that's when I contracted "convertitis"- the inability to build a miniature or model without changing it.

Fast forward to today. Warhammer is still a big part of my life. Its my main hobby. Frettering away at my art table- painting,clipping,sculpting and such keeps me grounded. Its literally saved my life and sanity after some trying medical issues.  So, I'm hoping to share my love for the hobby with this blog as well as catalog the rise of the 40k armies (and their backgrounds). Thanks for stopping by.
Posted by Rednekkboss at 10:59 AM No comments: