Work in Progress: Raptors:Scouts are done

The Scouts are done! Yeah!  The initial push to get them done was the local 40K league, but health issues have sprung up that make sitting this one out a good idea.  So, I'll keep working on the Raptors with the September league in mind and hopefully, I'll be feeling better by then. 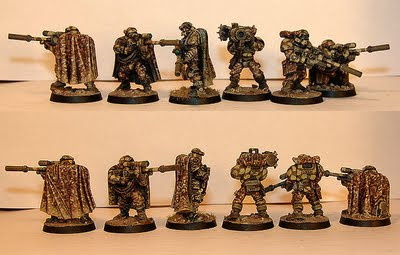 Next post will be a quick "how to-" on my twin linked plasmaguns for the Razorback turret.
Cheers, ya'll.
Posted by Rednekkboss at 10:11 PM 2 comments:

Some health issues slowed down my painting progress, but I got some stuff done on the scouts, plus a little somethin' Orky.

The bulk of the sniper team painting in progress. First two colors on the camo cloaks and basic olive on the armor. The Sergeant was my "test mini". I kept telling myself I'd keep the camo simple, but too many years of painting 1/35 scale WW2 German camoflage got me in some trouble. Here's the phase 2 scheme and the finished Sergeant's cloak. 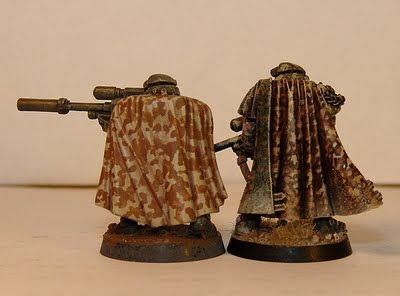 And here's a comp of diffferent angles on the, as yet unnamed, Scout Sergeant. 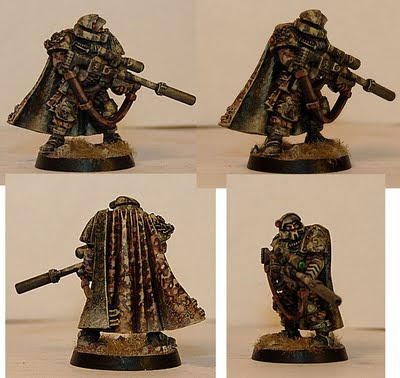 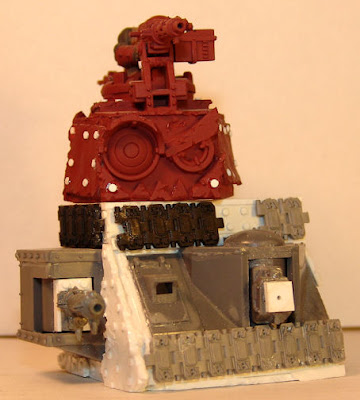 That's all for now.  More to come, keep checking back.
Cheers ya'll!
Posted by Rednekkboss at 12:45 AM No comments:

Celebrated my first wedding anniversary today (though we've been together 10 years, but only married 1) running foster kittens to and from the vet and eating breakfast and dinner out.  My wife has an interview tomorrow for a teaching position, so any major festivities were cut short/postponed until later in the week so she could prepare and I got caught up with my hobby stuff
.
Next Wednesday at my local gaming establishment, the Raptors will have their first outing. In preparation for this, I'm going to put as much time in on my small "combat patrol" force as possible. The league will run through august and has a limit of 500 points with various restrictions. My patrol force will be two 6 man Tactical Squads in Razorbacks and a 6 man Scout sniper team with a missile launcher.... all for 498 points. The league stipulates that you must stick with the same army, but can change the list from week to week as long as its within the various restrictions.  I'm pretty much in the "play with what I've got" mode, so any new purchases are unlikely. I am thinking I might "flesh out" one of the two squads to 10 men, if the 2 razorback strategy doesn't work out and/or if I get all 3 units painted to my satisfaction.  But I just can't see how I can do too much better with the restrictions, PLUS all 3 units are scoring troop choices.  Time will tell...anyways enough rambling here's the models.....

I got the scouts built with some minor conversions. I used the Sgt Telion model as the base for my Scout SGT and all of my scouts have helmets (yeah.... helping keep the novices alive with a helmet sounds like a good idea, huh) The heads are from these lovely folks and I personally love the way they look.  Originally, I wanted to really camo these guys out with a Ghille like cloak and such, but I gave in to the time constraints (which I told myself I wouldn't do) so I could ACTUALLY PLAY with my minis.  Tonight, I primed them, blocked in the undercoat of the GW foundation color Chardonite Granite, which I base my olive greens with.  The armor will be dark olive with a 'field applied camo" like the razorbacks and the cloth will be a camo pattern.  My one big gripe with the cloaked scouts is that if you assemble them they are harder to paint any details on....something I'll keep in mind for the next sniper team I build.

Razor Squad 3 is 90% done, good enough for me for table top, but I'll get back to some details on them once the other two are close.  I did, however, change the weapon on their SGT, so now both teams have a combi-melta for any pesky vehicles I might need to deal with. 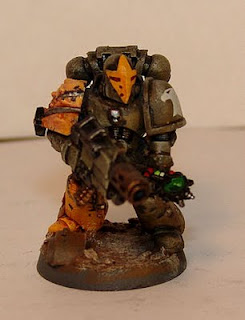 Razor Squad 2 and its mount got some more paint and the basic basing paints.  I'll be adding some lichen and static grass clumps once I'm done with the painting.  Both razorbacks will be an ongoing weathering/detailing project.  I really like the way the paint chipping is coming out on the Tac Marines, which I did with some spare foamy sponge from my army transport trays and a Dark Armor grey, then scored down to the metal in the heavily damaged spot.  I think the sponging technique could work good to rust application too, so the razors (and my Orks) will get some of that kind of love soon. Anyways.... Squad 2 , painting in progress so far..... 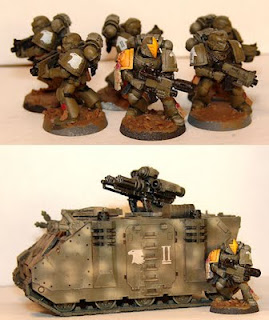 Last, but not least, as long as I had the Chardonite Granite out, I blocked in some basic colors on the two Ork characters I'm working on along with a thinned down coat of Scorched Brown over any metalic or leather parts as a base color for rusted areas, etc. Also have a battlewagon coming together which I'll feature in another post.  Kaptain Grogbeard and my Zagstrukk stand in Mista Ozzprey.... 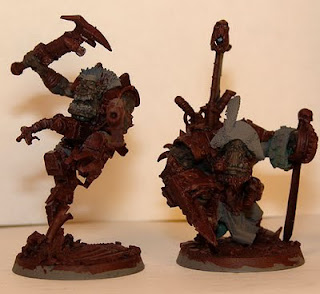 That's all for now, but I'll likely have more work done by Friday or so... my weekend will be shot to pieces by my out-of-the-house job, but I expect to squeeze in as much painting as possible to get the Raptors patrol force as close to table ready as possible before next Wednesday. So, check back.
Cheers, ya'll! ;)
Posted by Rednekkboss at 11:32 PM No comments:

Along with basing my Raptors, I did some work on the Orks that have been glaring at me from my work table.

Da Kaptin is now done and awaiting his primer. He has a snazzy new stabby fist, made from dreadnaught parts,scrap metal and an I beam. 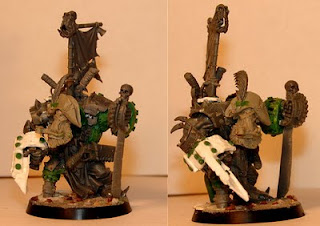 And I finished up my freebooter Zagstruk stand in as well...... 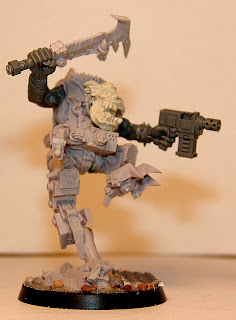 There have been some folks complaining about Citadel Finecast. I must have gotten lucky, this model was beautiful, with no more fixing than any metal piece, yet a joy to work with. Now,he'll have to get painted.

And, last but not least...... the first of the Venerators of Osiron.  He is one of "The Faceless", the Venerators version of Sanguinary Priests. I'm still wrestling with a paint scheme for these guys, so he'll likely have to wait until my Raptor tactical squad and scouts are done for the upcoming 40k league before he gets any paint, but who knows what might happen in Photoshop? 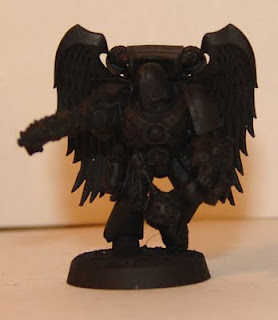 That's all for now. Cheers, ya'll!
Posted by Rednekkboss at 9:00 PM No comments: