Changing gears: For the Glory of Chaos.

There is a 500 point league at the local game store coming up, so I figured I'd break out the Imperial Guard Army.... traitors, of course.  The first attempt at a list is basically a veteran squad in a Chimera, two sentinals, my Marbo version and two penal squads. The vets are done, but I noticed the red brown primer is not condusive to great photos. But, here's the photos..... 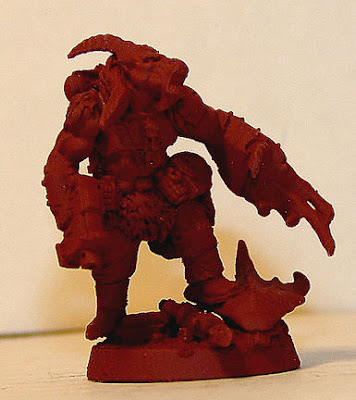 Here's the leader of my merry band, with his bolt pistol and mutated 'power fist'. I'm sure it'll all look better once its painted. 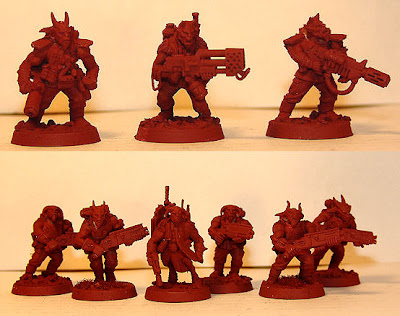 And.... the rest of the gang. Two Melta guns, a heavy flamer and shotguns for the rest. Beasty veterans. The chimera they will be using is not the one I intended for them (which I will be finishing up) but it will serve. Pictures of that to follow. Lots of work to do to get the boys put together and some paint on them before the league starts. As long as the painting is 'in progress' when it starts.

**Update/correction: Marbo will be replaced with another Sentinal, since no named characters are allowed in the patrol league. One more autocannon, its a good thing.
Posted by Rednekkboss at 6:14 PM 1 comment:

My out of the house job is retail. Needless to say, Christmas time is busy. That's my only excuse for not posting anything recently. Hopefully, I'll have some time to actually paint something. On the "To Do" list in the short term....

Posted by Rednekkboss at 5:45 PM 2 comments: