Here's the pattern I intend to use, though the colors may change to go with the arid climate in the background I've written. I'm thinking I'll do the same on the vehicles, but I may 'disrupt' it with dots or 'field applied' stuff. I may have to run to he hobby shop tomorrow. :) 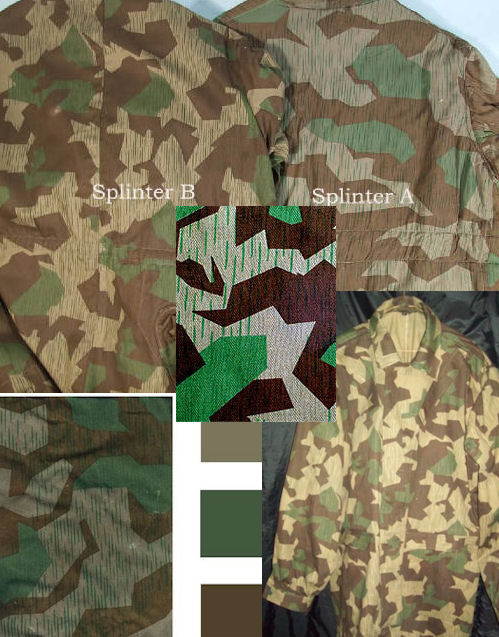 Cheers, ya'll!
Posted by Rednekkboss at 9:52 PM No comments:

I'm Back and Shifting gears....again.

After a long laborious caress from Grandfather Nurgle, I'm back to feeling human again, though I did get some stuff done.  I did an inventory on what I have for the traitor army I want to do and after some thought and calculations, I figured I could get about 500-750 points done before I needed to consider purchases. Well, things being what they are at the moment, purchases are few and far between and I have lots of stuff to build already, so I thought about what I have and what needed to be done. The obvious answer was two fold: finish my marines and work on my Imperial Guard. I have the dreadnaughts out and have been picking at them, but while being sick I was more in the mood to sit down and build something for a little while in between sleeping/resting. So, I dusted off my long neglected IG project that has been collecting dust.

This army consists of some refurbished miniatures with various stages of painting/construction, with some bitz and conversion work to make something cool of it. My army is the Volheim 507th "Lighthammers", a regiment that is part of a rapid response force (with very Germanic flavor) that is backed up by elements of an armored company. I also have about 40 metal kasrkin models, which were originally intended as Inquisitorial stormtroopers, back in the days of the Witchhunters codex.  They'll be making a dual appearance as a special ops add on force/Inquisitorial force...hopefully to be Valkyrie mounted, if I ever get any extra $$.

So here's the pictures: 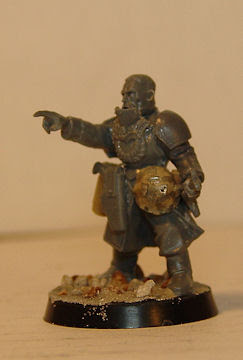 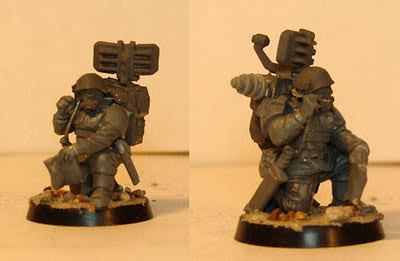 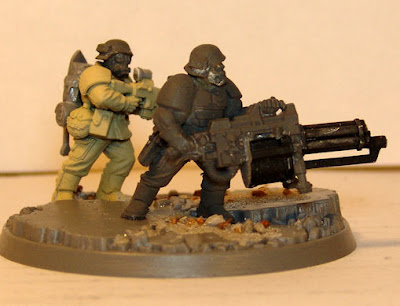 The LT and medic from the 1st Platoon. The short lasgun will be standard. 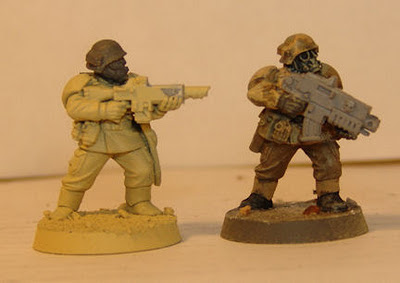 That is not the paint scheme , that's an old test. To be honest....I'm still up in the air, but I can tell you one thing for sure, World War Two German Fallschirmjager will likely have a large influence. But, what's a rapid response force without some armor.  The first of a couple light tanks. The workhorse, Devil Dog.

1/35 scale Tamiya Panzerkampfwagen II and the GW Chimera.  I have two more PZ.II, so....there will be more.  And I'm toying with converting the PzII kit hulls into some sort of Hydra AAA tanks. Of course, we'll need some heavier armor support as well, here's the command tank for the Support Company.

There we have it, so far. More to come and hopefully, I'll nail down a paint scheme.
Cheers, ya'll!
Posted by Rednekkboss at 7:16 PM 1 comment:

Thanks to a co-worker, I have another nasty cold like thing and it hit yesterday, when I was going to go play 40k. Just my luck lately. So.... no battle report. I may even sit this league out and just work on my army. I got some more painting done, should have an photo update in a day or so. Right now, its Comtrex and back to bed for a while.
Posted by Rednekkboss at 5:28 AM 2 comments: