I just got done with my "work week" so other "work week" (art/painting etc) begins tomorrow night... probably right after the "Dexter" premiere.   One sticking point I've been having with my Apostles is the chapter symbol. I was planning on turning the Dark Angels symbol into a stylized winged serpent. I've done this on two of the Drak Vengeance models, but I'm not overly thrilled with the results.  So I was thinking of an exaggerated wing with a screaming skull.... in jade on black.  I'm thinking I may have to send the boys in Warsaw some more $$ too.... for these.

Just a bit tooooooooo sexxxy! Of course, the real bitch will be getting these on to the Dark Vengeance models, but its not impossible. A sharp exacto blade can do all sorts of things and... there's always insta- mold.

Picture/model updates tomorrow or Monday at the latest.
Cheers ya'll!

The Templars of DOOOoom: Stompy

My painting time has been dedicated to the Dark Gods this week.  I'v got some progress done on everyone's favorite psychopath, Stompy.... 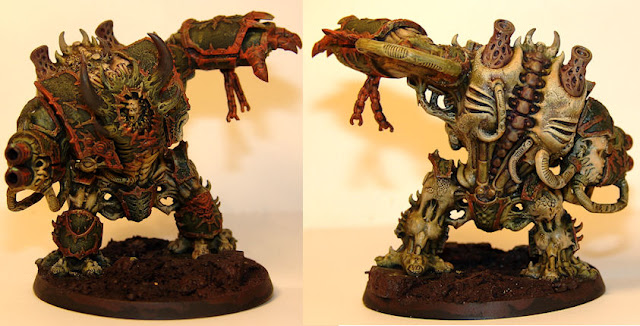 I'm sure there is a quicker way to do this, but the Hellbrute(s) will be a centerpiece of the army, so I'm spending alot of time on him. That... and I like painting dead, bruised and diseased flesh. So, he's probably close to 50% done. The plan is to do the exposed backbone in a rotten, bloody brown stinky look. I've still got a lot of detailing to do, but I'm just in total art geek love with the new line of GW washes and dry compounds for this project.

Also started work on some of the grunts from the Bloody 7th.  Base colors on the Vox creeps and the 'volunteer' cultist bodyguards.

That's all for now, more painting tonight and tomorrow, so I'll likely update on the weekend.
Cheer's ya'll!
Posted by Rednekkboss at 6:05 PM 2 comments:

I started a Flickr photostream, basically with hopes of attracting some attention... and maybe making the GW website. So its HERE in all its wonder and glory. Nothing that is new, really.... not yet.

In other news, I've been wrestling with some medical issues, so that's my only excuse for not posting. I have gotten some work done on Stompy and the Interrogator Chaplain, so keep an eye open for a post in the next day or so. Plus a few other goofy things I've been playing around with. In the meantime... go like my Flickr account...or whatever people do over there. :)

Apologies for the absense. I've got a medical condition I've been wrestling with for a week or so, which has made it hard to get any real progress done in the hobby room.

I'm calling the converting on the Interrogator Chaplain done.  Any other effects, like a jade feather pattern on the back crest and such, I'll do with paint. I might get a little goofy and do something with the skull and bones on the backpack, but I'm feeling that 'less is more' kinda vibe at the moment 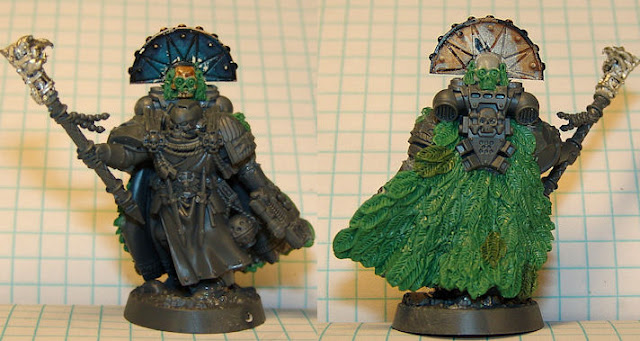 Also got alot of block colors done on the traitor guard and a couple of the Dark Vengeance Chosen, though it was Stompy that got the most love. 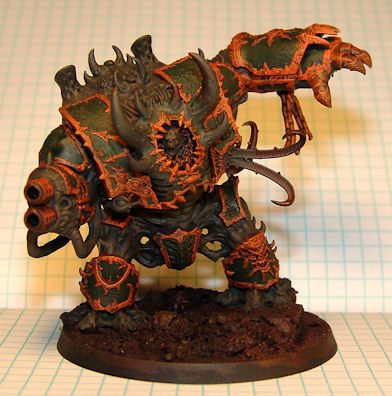 He's got the basic under colors on him as well as a two tone rust base. The greens will change alot before he's completed. In the end he'll have a rusty metal, sickly green look to him, not unlike Ahnek Draugar. I plan to go light with the skin areas, like Draugar and then fade into the darker,olivey green.  Those tentacles sticking out of the mouth on the left are bugging me a little and I may take then out and replace them with a more nurgly looking tongue like thing.  The more I work with this model, the more I want another one to really convert. But the leaked photos from the upcoming Chaos preview in White Dwarf are making me try to find ways to save up some cash....... cool stuff. And I WILL have one of those dragon things. hat's all for now. Next update should be around Sunday or so.

Apostles of Quetza: Cloak of Feathers

I have finished the cloak of feathers. Still much to do. 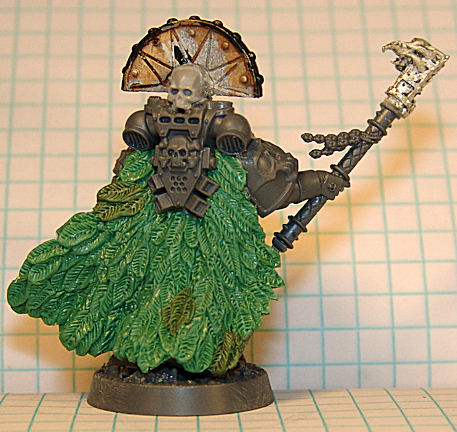 I spent alot of last night looking for references, now I have a couple great pages of glyphs and other neat images. It should put some of my sculpting skills to the test, but that is one of the intended purposes of this project.

And now for my future Chief Librarian.... 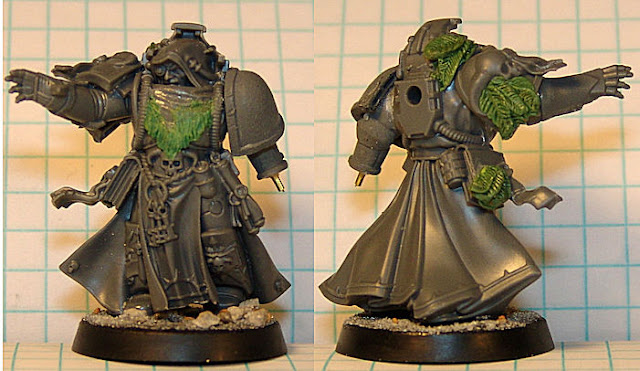 Still trying to figure out a good way to go with armaments. Looks like I'll be doing some fabricating, since the fantasy Lizardman stuff just doesn't thrill me. Besides, chainweapons are an attractive replacement for the obsidian edged warclubs or Maquhitl.

I've got some base colors and such on my chaos traitors, so they'll likely be part of the next update- likely towards weeks end.

Posted by Rednekkboss at 8:15 PM No comments:

OK.... lots going on. I got my grubby little mitts on a Limited Edition Dark Vengeance set. Love,love,LOVE the minis (I may need some more of these eventually) Great set, worth the $$ if you can use the minis. Since I have a never ending Chaos hoard and I've been gearing up to start another marine force, its perfect for me. 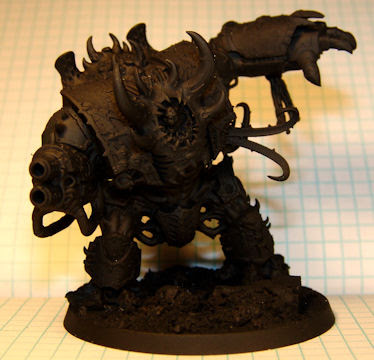 I absolutely love this mini.  Granted, I don't need more than 2 in the same pose and if I get another one, there will be some hacking. But assuming GW does a kit, this new Chaos Dreadnaught is finally, FINALLY ... the monkey to fit the bill. I hope and pray the regular old Chaos Marines, Khorne Berserkers (who really need it) and...maybe....just maybe, plastic Plague Marines, get an upgrade with the asthetic they have used in this set. With a decent codex (though....I will have no problem whatsoever with an overpowered one) and this new take on the design, they may finally get Chaos close to where it should be. Enough of my fanboy ranting.... on to the next bunch of traitors... 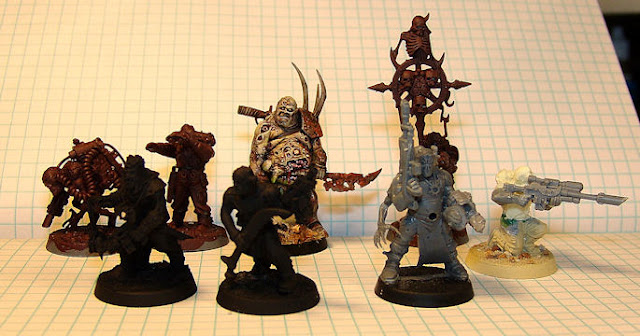 I've pieced together Draugar's Command squad. From left to right: Master Voxx, cultist meatshield #1, Artillery liason, cultist meatshield #2, Ahnek Draugar the Undieing, the medic, the icon bearer and the sniper.
I figured it would be a great way for sycophantic cultists to suck up to the commander by standing in front of a bullet for him. I mean.... why waste a perfectly good creep, when you have cultists handy?  So they will stand in as bodyguards. I'm also working on a spawn-thing as Nork stand in. Spawn. Ogre. Not alot of difference. Here's a close up of the unnamed 3 armed medic, who is still a work in progress. 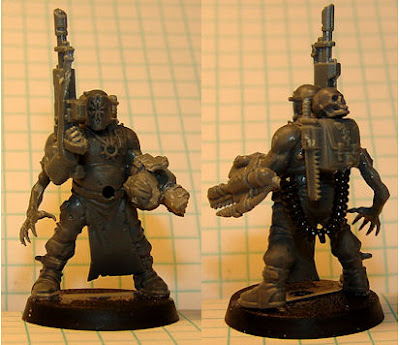 I've got to do some sculpting and other horror movie/gross kind of stuff with him. Not really sure I'd want this guy working on me if I got hit.

SPEAKING OF SCULPTING....... The Warpig of the Orkpacalypse makes a sudden and stinky reappearance.  He was lonely.  I started putting hair on the critter and here's the results. I have some sketches of the final concept knocking around too. Now that I have a functioning scanner again, they'll likely be in the next post.  Still trying to figure out the orky engineering on how to get there on some of it. 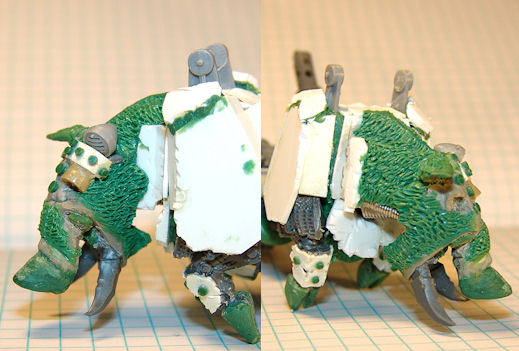 And finally... my loyal marines.  I'm still rounding out the name of the chapter. Leaning toward the Apostles of Quetza or something like that. I still may do an allied sized force of the Venerators of Osiron too, which will likely be Blood Angels successors now.... bit that will involve some investment, so it may be a while. In the meantime, I'll move forward with my Dark Angels successor chapter. Being a Space Wolf player from way,way back, I'm sure Leman Russ is having a little acid reflux with me going off the wagon, but I gave all of my Space Wolf stuff to my painting protege and he's having a ball with it (plus he earned it by helping me with yardwork and stuff)... so I don't feel too bad. I always liked the Angels of Vengeance chapter, but I've had a long standing fascination with Meso-American cultures as well, so I'm working on an Aztec/Mayan inspired (with a mishmash of some other Native American imagery) theme for my Marines.  Here's the limited edition Interigator-Chaplain, I'm working on..... and the beginning of his cloak of feathers. :) 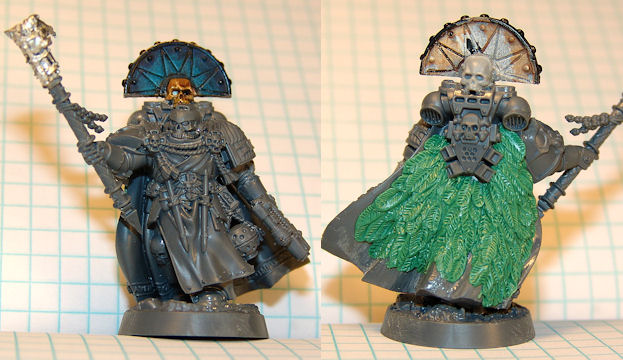 Pretty pleased with the progress so far and it was alot easier than it looked. Originally I was planning a big headdress, but I figure there has to be a difference between ceremonial costume and something that's almost practical for the battlefield. Almost.  You've got to think he burns through a few of those feathered cloaks. Anyways its a good start. the main imagery will be skulls, feathers and jaguar skins.  Still knocking around a paint scheme, but it will incorporate deep greens, jade, black and jaguar patterns. A pain to paint, most likely... but it should look friggin' cooooooooool when its done.  That's it for now. I've got a long 'weekend' next week, 5 days off... so somewhere between comics, the 'honey-do' list and general housework, I aught to get some serious hobby time.