This week has been all about the mundane. Priming,washing,etc.etc. The good news is that all the Leman Russes and their components are ready for actual painting now. I've begun the rusting process on the Sentinals and started painting the Penal troops/Cultists. Since I'd been working on vehicles (and wanted to try out a newly aquired product) I decided to finish up the Cultists before moving on to the tanks. Here's the first 6 that are done (close up of 4 on the bottom).... 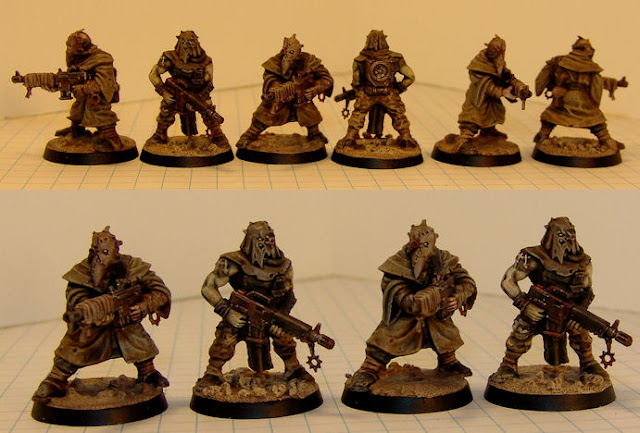 The 'new' product (at least new for me) is The Army Painter Warpaints: Quickshade wash. This stuff. Oh.... its fabulous. Here's one of the 100 future Plague Rat-Cultists-Zombies washed over the primer. 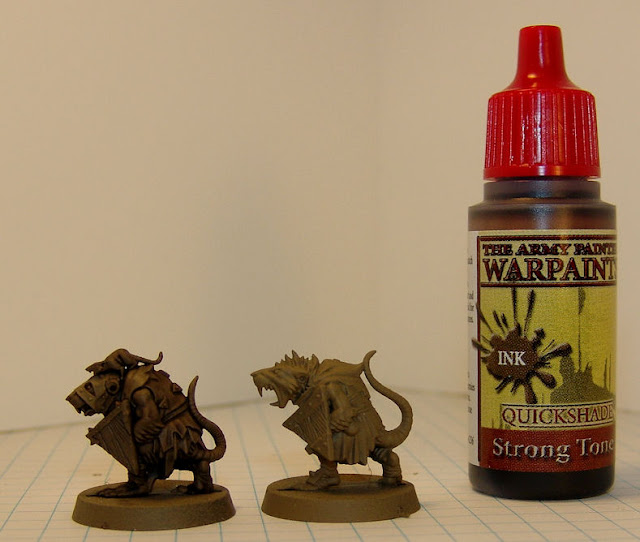 Some of the robes on the Cultists above are literally a drybrush of bleached bone over the primer and then a wash of this stuff.  And you can get it in a can! You could dip minis, if you were into that sort of thing, personally I like to control pooling with a brush, but its HIGHLY recommended. It will be a permanent part of my arsenal from now on.

New comics should be up on Sunday, maybe sooner. ;)

Two of the three Leman Russ Demolishers are ready to be primed.

First up, the hull for working close-up and personal. Multi-melta sponsons and a bow mounted heavy flamer....plus spiky bits.

Next up, is the more general purpose "blast-yer-face-off (but don't roll '1')" hull, with plasma cannon sponsons and a Crixus-pattern Heavy bolter in the hull mount.

And the turret for the "Swiss army knife" hull which has a heavy bolter hull mount and magnetized sponsons. 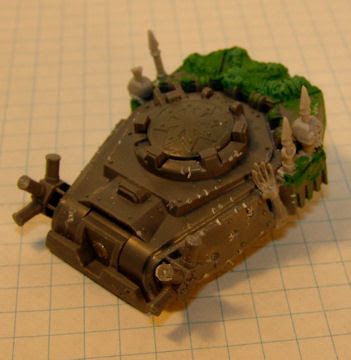 SO.... after a nice coat of British Military Brown, I'll have to finally figure out how I'm going to paint these buggers and break in my new air compressor. Should be a painting update about mid week or so and comics are on the horizon as well. Stay tuned!

Posted by Rednekkboss at 8:05 PM No comments:

"Hey, you've got a little something on your turret there."

Lots of projects going on at once. Let's start with the Leman Russes.  All the magnetizing is done, some of the weapons are primed and all the gribbly sculpting is done, all that remains is baggage, battle damage, trophies and any other piddly detailing. They should be ready for priming by this time next week!
Here's the turrets, with varying degrees of corruption, the guy on the right might stand in for Prask. 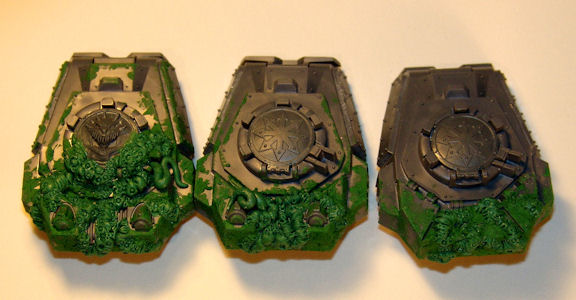 I finished the sculpting on the priest's cowl, now to add a few more 40k-ish details and finish up the base to make him suitable for the field. 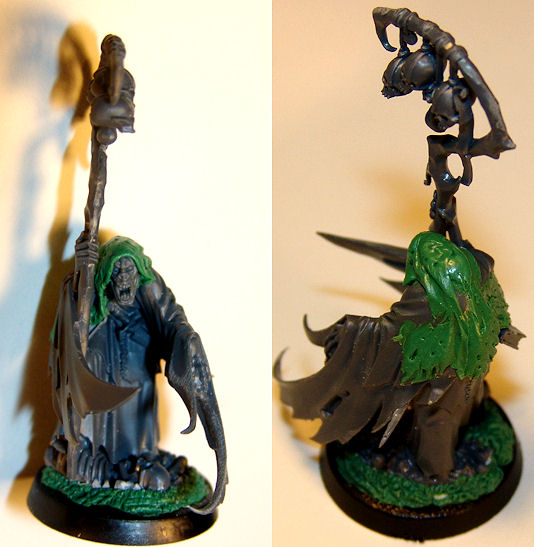 The other big activity this last week has been priming and base coating. the sentinals are primed and based dark brown. And the hoard of one armed rats and cultists got a base coat of British Military Brown (shown here before the first round- just to show the mass)  right now is ideal priming weather in Florida. Once "summer" begins, in March or April. the humidity makes this kind of mass priming often problematic. 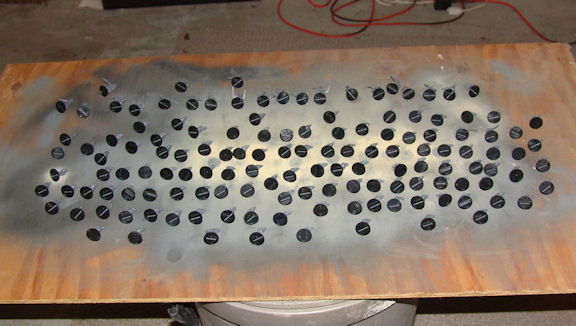 And lastly... another conversion side project that is in its infancy. Who is he!?! Didn't I see him sleeping in a hammock in the last "Warzone:Crixus"?!? WHAT the HECK is he doing HERE!?! 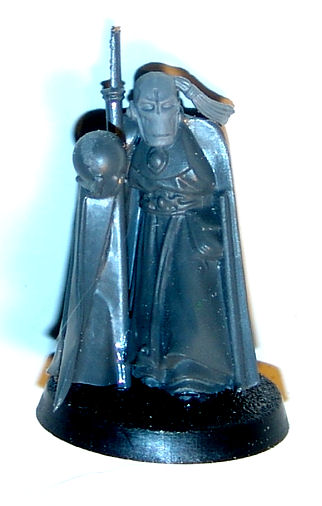 I love the 6th edition ally rules. :) "Warzone:Crixus #3" is on deck for later this week, get ready to meet the guys aboard the mysterious fly.

See what the insidious Tau are up to in the second installment of "Warzone:Crixus" at Da Rednekkz Artwerkz!  Hop to it, ya mangy gitz!
Posted by Rednekkboss at 11:02 PM 1 comment:

Hot off the workbench!!! Mostly because its too much of a mess to clear off to take better photos.... here's some pictures from the Leman Russ assembly line.

What happens when you throw a gribbly in the engine compartment of a Leman Russ, you ask? Well, on Crixus... it looks something like this... 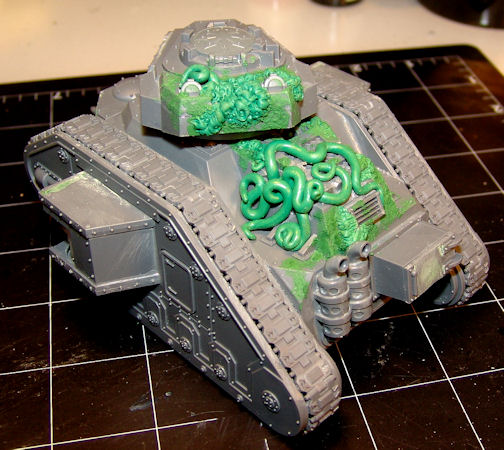 Them gribblies always get out and start corrupting other parts of the machine. They never stay where you put them. The other two are still in progress.... 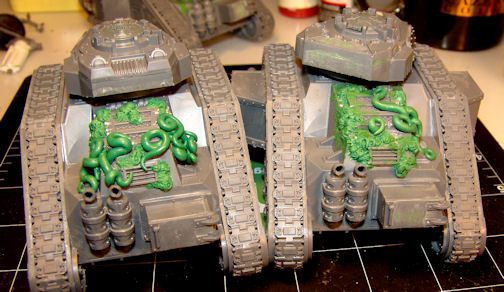 One of the few reasonable excuses I have for posting late this week is that I got a game in on Wednesday (promptly followed by a medical issue on Thursday- which I won't bore you with the details of) The brooding, evil Verminlord Rhett Bastid and his swarms of ratmen fought the Tyranids in what was to become a great bloodbath. Mostly ratman blood, but a blood bath just the same.  I took all of 1 photo of the set up and I'm considering a comic/narrative battle report of sorts since it was an 'experimental' game for both me and my painting protege' Broodnest. He was trying out his tournament list and I was trying not to die by turn 3. But... seriously, I did learn quite a bit about plague zombies,Nurgle psychic powers, the Leman Russ and yet again.... just how bad ass a Penal Squad can be. More to come on that.

One lesson learned from the last two games is that the Imperial Guard may end up being the primary detachment in my allied battles more often than I thought. This has sparked a revisiting to the guard models I have. In the effort to keep my new purchases to a minimum and build/paint the mountain of models I have (and thus keep the wife happy- which is ALWAYS important), I've decided to throw pretty much everything into the Traitor guard army. which means the 3 'loyal' guard vehicles I have painted and collecting dust without an army have been captured and their defilement for the Ruinous Powers has begun.... 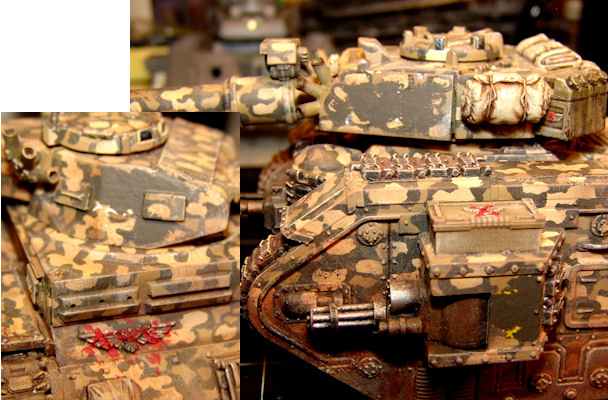 Painting over loyalist markings(sloppily), defiling imperial eagles. They won't have the gribblies in the engines and all, but their corruption will be beginning. It should be fun and present some challenges. My eventual plan is for some fully corrupted vehicles too. SO, the idea is to have vehicles showing corruption of various levels.

Also decided my Chaos Guardsmen needed some preachers, especially since I keep fighting Tyranids all the time. So, I started this guy. I'm still working on a cowl/hood for him, but I liked the crypt ghoul head better than the one that came with the kit. 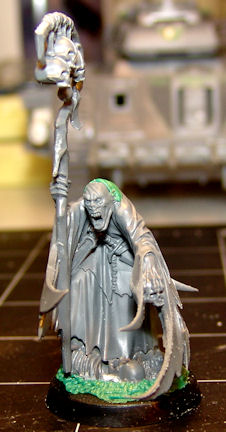 The plan for this coming week is to get some priming done on the Sentinals, cultists and possible some of the ratmen. Finishing the tanks will be the piddly work, since most of the major construction is done. Some magnetizing of weapons remains, then its detailing and 'cha-osifying'.

Most importantly, I have to finish up "Warzone:Crixus" #2, which is on my drawing table, but got held up thanks to the last couple days silliness.  Now comes the part where I see what kind of audience I have..... I aim t' misbehave... just a bit.

AND lastly, but certainly not leastly... this week my humble little hobby blog broke 15 THOUSAND page views. Honestly, I'm still in shock. I started this whole thing as creative therapy and I'm SO beyond happy that all of you have enjoyed it enough to hang out and partake in my madness. Each time I check in and see that ticker has gone up, it gives me incentive to do more and to push myself. I expect to keep doing this for quite sometime.... and who knows, I might even be able to do it on a reliable schedule someday (that'd be a friggin shock, huh) Thank you all so very much for checking in and all of your commentary. I'll do my best to keep things interesting both here and at Da Artwerkz.

For what its worth, if you are on Facebook, I've got a page there too.Check it out if you get the chance.
Cheers ya'll!
Posted by Rednekkboss at 8:00 PM No comments:

Its not like I've been slacking off, watching football and eating tacos... well maybe Sunday. Here's the state of my hobby desk... 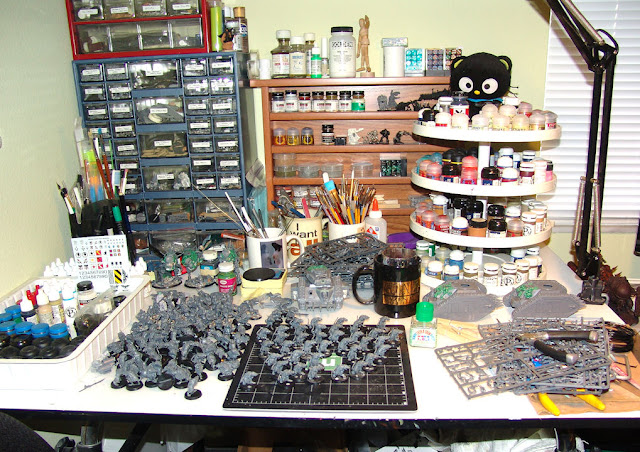 On top of some cleaning and reorganizing, the desk has the following, in various stages of production:

3 Leman Russ Tanks: All of which will have magnetized main armament, but fixed sponson weapons... and nice nurgly engine compartments, because someone saw fit to throw a gribbly inside. For my Traitor Guard, of course.

30-odd Cultists: These guys were pictures earlier, but their bases have been tweaked and they are ready for priming now. That is, if I can kill all the friggin' fleas in my garage.

112+ Ratmen: NO... I'm not getting into Warhammer Fantasy, they are on round bases. (Anyone know a good use for square bases, by the way?  I have a billion of them) These are going to be my cheap and cheesy solution to the Plague Zombie issue.  I acquired most of them a while back when the new edition of fantasy hit (when I was considering a Skaven army) But they will be the wayward, diseased zombie-like cultist followers of my new Typhus stand-in, the enigmatic Rhett Bastid.

4 Rat Ogres: These gents are soon to be Bastid's Obliterators.Yeah.... I said Obliterators. Oh, the conversion possibilities...

AND SOMEWHERE in that mess there is a THROGG the troll king model which will end up being a new deamon prince, because the Doombull needs a friend.

So that's what I'm up to, that and working on the next "WARZONE: CRIXUS" comic, where we meet the Tau and the occupants of the fly ship, which should be done later this week.  I'll post some detail pics of the tanks when there is a bit more done. That's it for now, gang.