The Winds of Chaos and Real Life

Isn't it irritating when the real world interrupts your hobby time? I mean, seriously! The nerve!  Well, due to a series of fortunate and unfortunate events, none of which allowed for time at my hobby desk I will be in for a solid scolding from the Commisars at Boot Camp for missing my hobby vow for May. Unless I can figure out how to stop time in the next few hours... that is.

Here are the remaining Cultists/Penal troops in their varied states of completion. I haven't had a chance to touch the tanks since my last post.

The upside is I can do a couple mini tutorials that some of the guys around the web have asked for on how I've gotten some of the 'realism' with a could easy applications of washes on these guys. I'm still planning to get them done in the next couple weeks before the school year ends and my wife is off for the summer... and the "Honey-Do" list grows. Hopefully, next school year will bring a job change for yours truely, as I'm hoping to get back into the classroom again myself and get paint all over me with the rugrats, if possible...even if its only part time. Which would be better than what I'm doing now.

Either way, we'll forge ahead on the Sons of DOOooom and their allies.... and who knows what else. I'm itching to build something that flies once these tanks are done. That much is certain. I'll do my best to get an update in around the weekend.

The camoflaging continues! One tank hull is completely done, the other will be finished up tonight, both turrets are done along with a full compliment of main guns. I'm concentrating on the ones I need to finish for the painting vow I took, with the third being a bonus I can finish after April 30 if need be. Here's the basic colors on the turrets and main guns..... 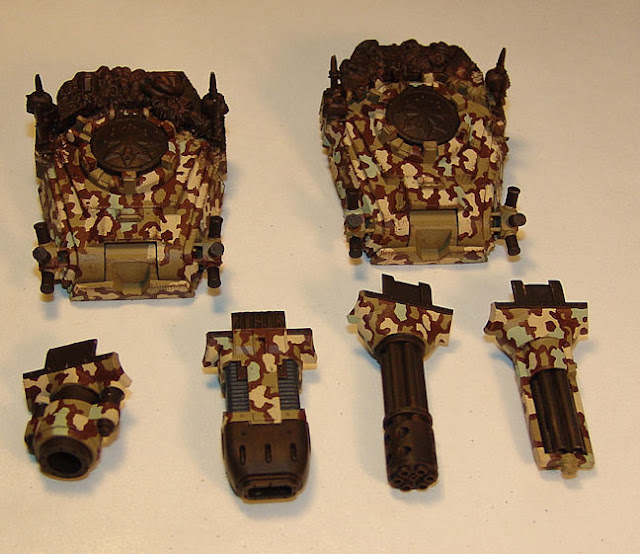 Demolisher,Executioner,Punisher and Exterminator(Old School Gatling style) The dark brown on the back of the turrets is a base for all the rust and general corruption to follow, which I plan to do after the basic weathering of the whole tank.. since much of it is, well..... alive. Icky.

Here's what the whole package looks like together at this stage.

Next up, detail and weathering. But that's it for now....

Cheers Ya'll!
Posted by Rednekkboss at 3:14 PM No comments:

Procrastination. Procrastin-a-a-tion. Its making you wait. Its keeping you wa-ai-ting.

Yup. Typical. 20 days left on my 4 month "challenge" and I still find myself with 14 of 20 cultists to finish painting and two tanks to finish.  At least they are assembled and its down to a matter of details. Fully achievable, but.... ideally I should be finishing up the tanks right now. I'm betting I'll be posting my "Finally, I'm finished!" photos somewhere between April 28-30... though I'm setting a personal deadline for April 26 (the challenge deadline is "by May 1").... Anyways.... on to the pictures.....

I went with a Reaper Pale Olive. I'm kind of thinking a grey of similar tone would have also been a good choice, but this color reminds me of sage and the faded color of palmettos, so I thought it kind of works with the desert/dry scrub look.

The contrast color, instead of Chardon Granite this time, is Army Painter Oak Brown, which I think will look sharp once its all weathered down. It looks a bit garish when first applied. 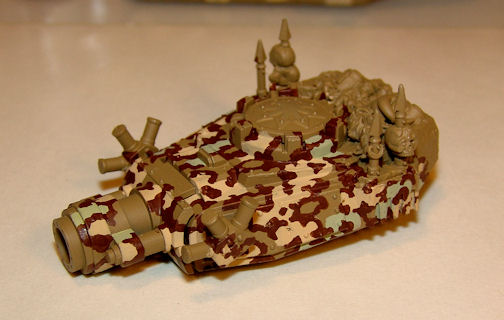 Now comes the fun part of the Oak Brown freehand on the rest of the lot. I also now have a pallet for some uniform camoflage on some of the cultists- that should be about as fun to paint as a colonoscopy.

Eagerly awaiting my Tau Codex  YEAH.... you heard me right! What of it!  I need allies..... yeah, that's it.  Is it still considered bandwagon jumping if you've had a few boxes of minis collecting dust for literally years? I've got some paint scheme ideas in mind (one of which makes the insanity level of the one above look like child's play) but I must say I'm intrigued by the N'Dras paint scheme in the last White Dwarf.  I've always wanted to do an army in blues and greens. At the same time, the Tau scream for camoflage.... so I'm waiting on the new book.

I also have to apologize for the lack of comics (and posts) Part of it has been due to an unfortunate medical issue, the other a temporary dismantling of my art area. But I'm off to IKEA tomorrow to look for some handy dandy new lighting, so hopefully I can finish up some comics in between painting tanks and cultists. Keep a weather eye. The Ol' Rednekk is BACK!!