I did some eye composites for Ms. Blinky. They are not perfect, since my photo manipulating skills in Paintshop Pro are no where near as good as I'd like, especially with the time allowed on my laptop.  But here's the ideas....

Right to Left: First ,a Brown puppy doggish eye with bloody,creepy diseased looking outer eye. Second,  We go to green and yellow(I really couldn't get the yellow the way I wanted it)- think jaundiced, puss-filled,sickly,brown rotting veins. And lastly, Totally blown out veiny, bloodshot, cattaract/blind/milky.  Any votes are appreciated.

Ms. Blinky and ALL of my tanks went off to battle this week in a rare game for me. Prepared for a battle against the Hive Mind, I made an Imperial Guard list with Chaos allies featuring 4 Leman Russes, a Medusa, a Banewolf and Ms Blinky, with infantry and the DOOooombull! Much to my suprise he showed up with a Blood Angels army. Needless to say, the game did not go as I would have hoped. Though I fought hard. The few highlights of the game for the Sons of DOOooom (aside from offering a great many sacrifices up to Khorne) were: A Penal(cultist) squad gunning down a half dozen Assault marines with their lasguns AND the Medusa scattering onto the Librarian Dread and immobilising it for the game far from any combat and out of range of its psychic powers.

Otherwise, my army played what seems to be typical Sons of DOOooom/Templars of DOOooom battle doctrine: Be incredibly hard to kill, until the crucial turn or the next to last turn-which ever comes first, while hitting the enemy with a ridiculous amount of hits, but only wounding him with around 20% of said hits. The Doombull, took the full brunt of a Land raider Crusader, Astroth and 5 close combat terminators for 2 turns until he finally died. Astroth is a friggin BEAST!! All of the Leman Russ were hard to kill, in fact 2 remained, when we called the game.  Ms. Blinky.....well, she was killed with the first shot of the game. :(  No respect.

Taking a short break for a holiday, so I won't be posting again until August.  Until then..... Cheers, ya'll!
Posted by Rednekkboss at 11:10 PM 2 comments:

Look into my EYE

Ms. Blinky, while part of the overall army, is providing a nice distraction from the tanks for the moment. I've gotten quite a bit done on her. With some washes and drybrushing over the initial flesh colors, I then laid in the base colors for the armored parts. 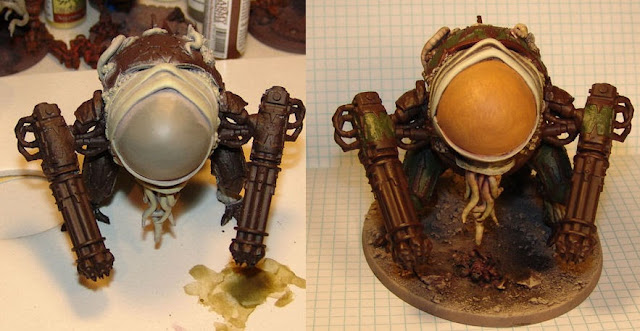 So, she's come quite a ways over the week. Much more to do.

Cheers ya'll!
Posted by Rednekkboss at 10:46 PM No comments: