Just on a lark...or a whim..or a oh, whatever... I needed something a bit better to shoot my mini photos. But something simple and easy, because I'm lazy and a painter, not a dadgum photographer. So, I set up a sketchbook and a golden paint pot with some more of the paper on it...and BLAM! time fer pictures, ya'll!

Yes, they have all been here before , but now they have new pictures. First off, the leader of my Raptor Assault #7 squad have spied their new codex on the horizon. Sarge may have soiled his armor in excitement.Its hard to tell because most of his lower half is bionics. 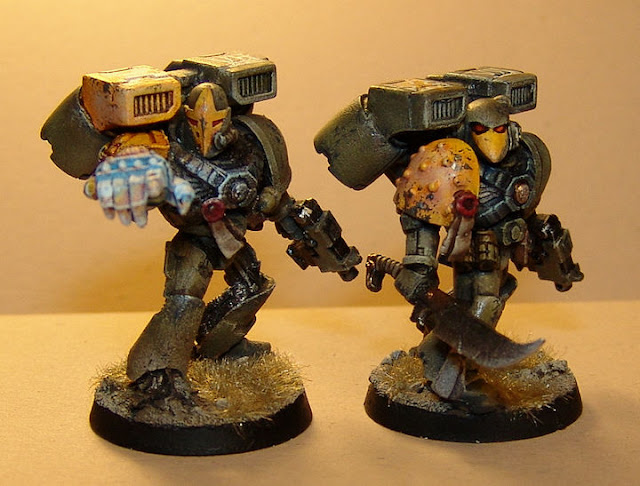 Captain Ikarius is rightly excited about having a new book in the wings too. 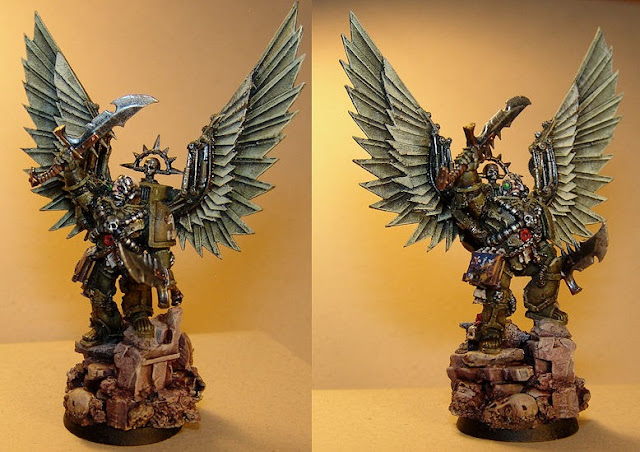 Of course, when someone said photos... Da Reddnekkz couldn't be left out.  The miniature that started it all. Koota the Mek (and I still couldn't get a clear shot of his face) 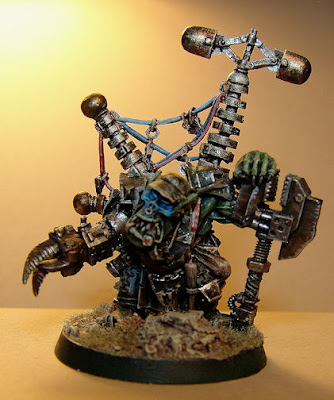 Them pesky Freebooters had to get in on it too. First to arrive, as usual, was Mista Ozzprey. 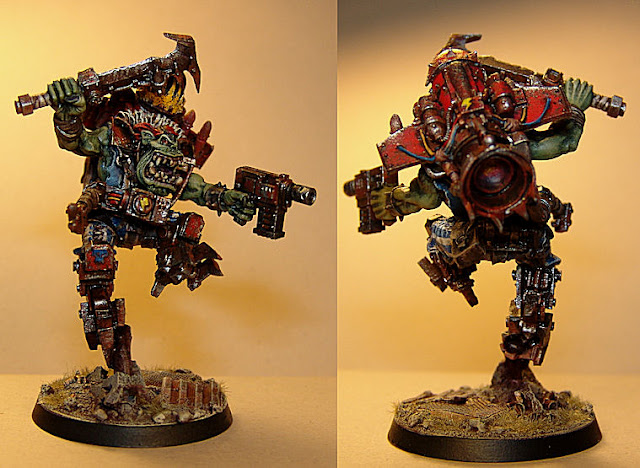 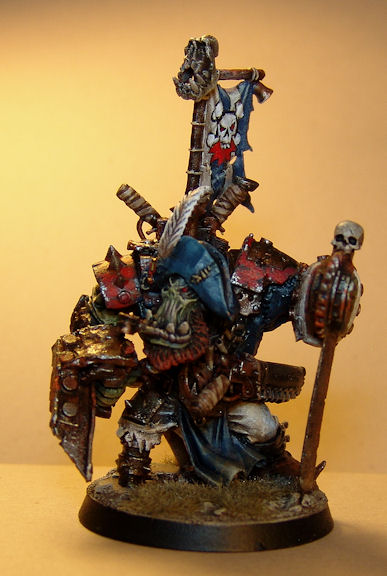 Everybody left the field at the sudden rumbling approach of Da Genrul - Rustbutt Kil' Lee... and his spit bucket grot . Somehow, an eldar onlooker couldn't get out of the way in time. 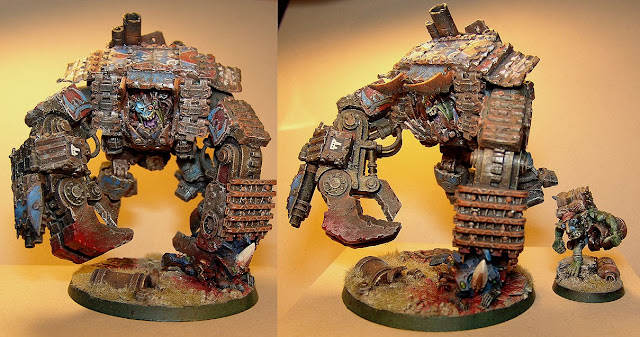 And of course, Ahnek Draugar. Just because he could be the coolest model I actually have finished at the moment and he needed a better picture. 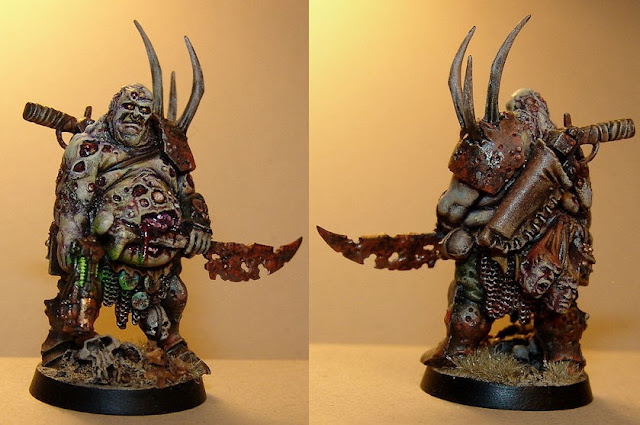 Gotta love those eyes. Puuuuurty.  But, it looks like I'll have a better set up for finished photos.

A half dozen gore strewn behemoths picked their way through the corpses of what had been the 116th Crius Royal Household Fussiliers.. or at least its mobile kitchens and supply train. As one gorged himself on a gallon of ice cream, another took the heads of the coffee cart staff. Khorne doesn't care where the skulls come from.

Pusticlese stepped over the disembowled corpse of a dishwasher. "Nice job. Did they put up a good fight?" he suppressed a smirk, though on his half rotten face it was hard to tell. Buboe, who lumbered behind him made no attempt to hide his chuckle and accented it by a clanking barrage of flatulence inside his rusting armor.

A beastial face glowered back at them, its goatee covered in cookies and cream. "Piss off. We lost two of our brothers."

"You lost two guys in TERMINATOR ARMOR to cooks?!?" gaffawed Buboe in his baritone.

"They had knives! And flammable liquids!" The beast terminator pointed to the smoldering hulk that used to be his battle brother. He took a step toward a tub of rocky road, then remembered it had peanuts in it. "Besides, Khorne doesn't care where his Dogs get their skulls."

"So, you guys are the Dogs of Khorne?" Pusticles asked, cradling his combi-bolter. "You know you kind of have that goat thing going on. That beasty goat thing. Not so much of a dog thing."

"I AM CHAD! Champion of the BLOOD GOD!!" The terminator puffed up to his full height as his  remaining compatriots gathered closer, hefting their weapons and newly collected heads. "WE are the DOGS of KHORNE! We hunt for skulls for HIS throne.!"  Vanilla ice cream frothed in this goat like mouth, though he coughed a bit on the chips of cookie in his throat as he led his team in a growl.

The two plague marines stood silent. Buboe, towering over Pusticles by a head or two, snorted a bit as he bumped his champion's shoulder plate with his elbow. "They're Khorne Dogs."

The two burst out laughing and walked back down the hill. Chad, champion of Khorne let out a physical sigh, as his companions hurled a few heads and many insults at the two plague marines.  He kicked around in the freezer cart. There had to be some plain chocolate in there somewhere. Just some plain friggin chocolate.

SO... I  spent the last week rehabbing 10 Terminators.  They have been through a lot. As you can see by this "before" picture..... 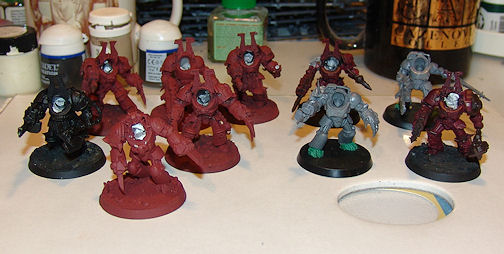 I went through the unit with my nit-picker glasses on, scraping seams and re-doing details. All the old shoulder plates were taken off. Heads were removed. I also made sure everyone had the 'bunny ears of Khorne" on their termy armor. I hate,hate HATE the trophy racks on Chaos terminators, so I had to get the armors all straightened away and chaosified.  In the long run, they will get shoulder plates like these....

Here's what the "finished" product looks like. I'll get them re-primed and start painting, I'm not going to wait for the shoulder plates, because I may not make THAT order until November or so, since there are a few more things I want from the boys in Warsaw. 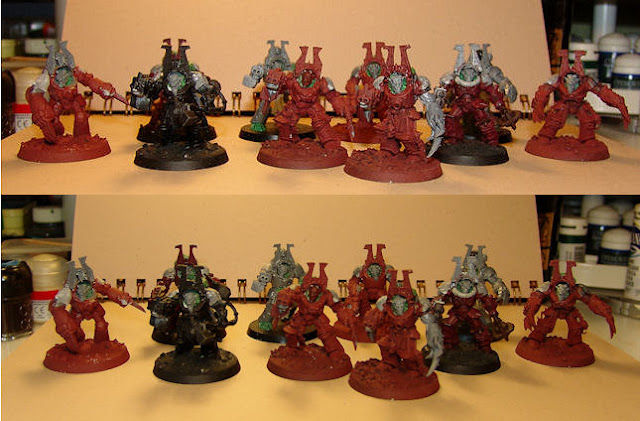 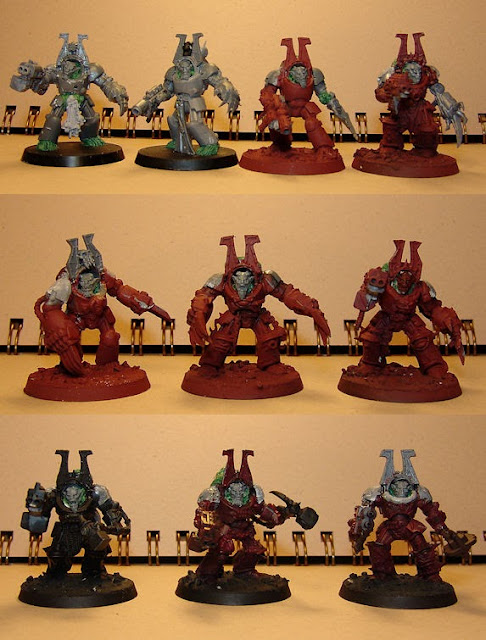 And what did I do with the backs? 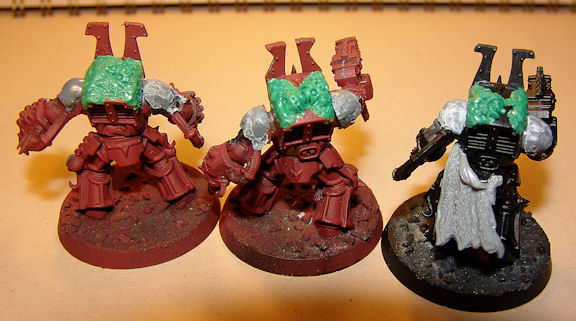 Opening up a sketch book and using it for an impromtu photo area seems to have worked a LOT better than I thought it would. I'm still a bit apprehensive about the background color, but I'm going to shoot some of my painted minis against it later this week and see how they come out. But I did a close-up on the guy I've chosen as Chad. 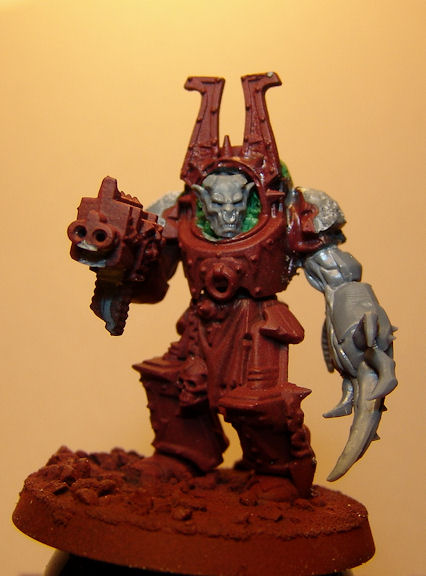 I just set him on a paint tub. I'll come up with something better and I may have a much better photo set up, which is not only good, but painfully simple and easily storable.  I'll post my photo experiments on Wednesday.

Back in the Saddle Again....

Finally! Praise the Dark Gods! I'm back at my hobby stuff. Well, sort of. My hobby room has looked like a rummage sale that has been hit by a car bomb, so I have been hard at work. Fairly reorganized, at least to the point where work can begin again, its time to get the ball rolling. And if you have heard of Games Workshop's emminent release schedule, there is no time like the present.

One of the big problems I've had is vehicle storage, during painting/building and afterwards. So, I've created the vehicle park.... which is just full of all sorts of Chaos. It also illustrates how good my vehicle camo works too, which is pretty cool. :) 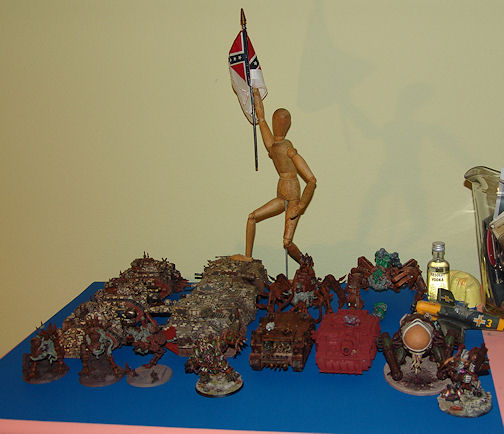 The sad part is that the only finished models are the Romanian Me-109 and Stompy the Hellbrute. And if you are wondering... I went to Gettysburg, Pennsylvania during my vacation and captured that rebel flag from a very tasty hamburger at a pub in town. (FWIW- The battlefield and museum are just an awe inspiring and haunting place for anyone interested in history- highly recommendable)

After the vacation, remodling and medical hijinks I've been taking stock of the hobby projects and my paints. I painted my first Space Marine in 1992 with craft paints from the local drug store, now I find myself coming full circle. Admittedly, craft paints are better than they were then. I've been using them for basing ans scenery and after looking at the state of some of my basic colors after my hobby break this summer I hit the local craft store today for basing paints, basic undercoating colors and universal drybrushing colors (bleached bone- for me) 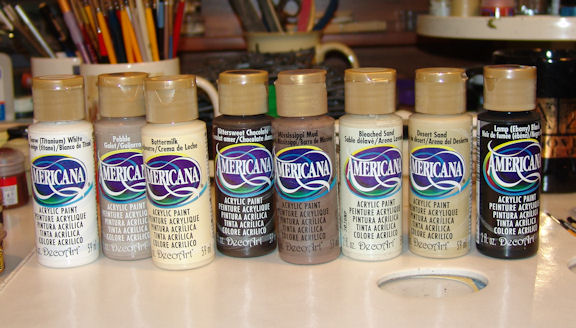 THE TEMPLARS OF DOOooom!:
Much to still do with the lads.  I've started a basic inventory of troops and the status of models. So, finishing up the units that will actually get used will be priority one and any new builds. Then on to any other madness.  Of course, this spreads out into the Traitor Guards army and the Deamon allies. Its a BIG Project...that will pretty much never end.

RAPTORS 2.0
Those evil bastar... er, I mean... wonderful bloaks at Games Workshop have decided to release the next few codexes just to make sure I can never have a fully painted army. Space Marines are next, then Tyranids (yes...yes.... I'm going to be giving in to the call from the Hive Mind again.... you never truely can leave the Hive, ya know), then Guard,Orks and Space Wolves.  I'm going to have to make more money..its just that simple.  Seeing this, I'll be getting the boys in olive green out and tweeking them. Finishing up a few units I wanted to finish and I'm sure I'll add a few models once I see the new book. Assuming the rumors of the Landspeeder transport for scouts are true I can garauntee 1-2 of them without a doubt, even if my guys can't shoot for shit.

HIVE FLEET BLUE CRAB
It has to happen. It just does.

Da REDNEKKZ
My Orks need some love. (Icky.)  If nothing else I want to get an allied size force painted ....oh, and I have 2 Fighta Bomba kits. :)

Da CRONZ
The Necron allied force I have for my Orks and Chaos army, still int eh boxes as yet unnamed, but likely as incompetent as the rest.

UNNAMED SPACE MARINE CHAPTER
I'll spring this one on you later. (Evil grin) I've been wanting to do a "showcase army" for years and I think I'm ready to start one. This one will be heavily converted. It will likely use the Space Wolves Codex, but not necessarily (or might be designed to use either) 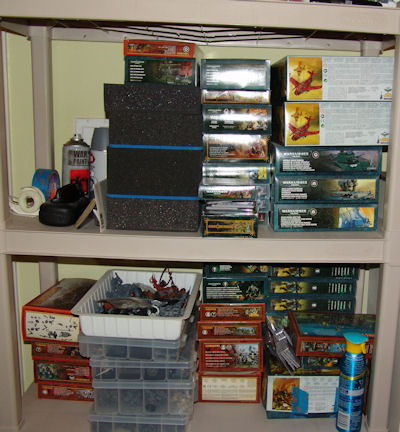 Loads to come. The goal is to get back to a twice a week posting schedule or so, but it'll likely be slower at first. Lots to do, lots to do. The above is only about a third of it. Oi.

Cheer, ya'll!
Posted by Rednekkboss at 10:14 PM No comments:

One of the dangers of flirting with Chaos is having to pay the price for all the coolness. So, after a much deserved holiday that took me from Florida to the far reaches of the Adriondak Mountains of New York and the border of Canada oozing its niceness, I have come back to the swamps of Central Florida to this mess.... 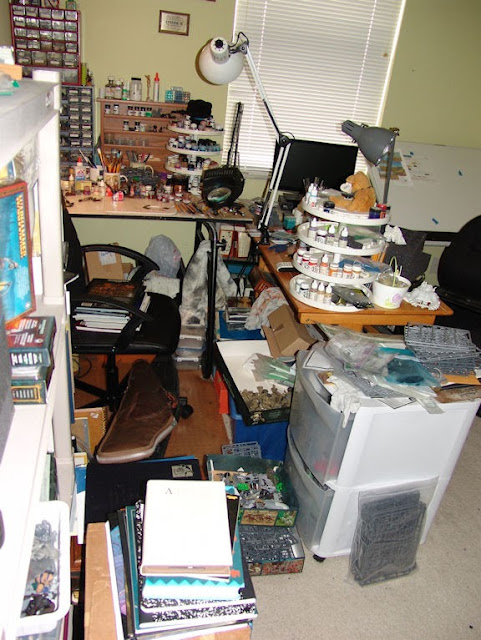 ...... and that's just the hobby room. We drove and came home with a bunch of family heirlooms/junk, on top of getting an influx of furniture from the in-laws who are down-sizing their living area. Thus, Tzeentch has thrown me a list of things to do that has severely hampered my hobby for a couple more weeks at least.

Decisions have been made, however. Ms.Blinky's eye is going to be a mix of all 3 examples. (Yeah.... that helps) Basically, a deep swampy,brown to olivey-sickly greenish pupil, with no real discernable features. Think of a disturbing deep pool looking back at you.... but with veins in it and a pussy,bloodshot outer eye. Should be DEEeeeeeeeeeee-licious looking. ;)

In other news, I did get some work done on an upcoming Templars of DOOooom comic. Kind of a reboot of "Warzone :Crixus", but something I might be able to put a few items in my online store from (...because I'm poor and hate my day job) Just for giggles, I may throw some artwork on here of a non-warhammer nature, since I'm going to be working on illustrating a children's book with a zombie in it. And we all LOVE zombies...right?

Cheer's Ya'll!
Posted by Rednekkboss at 12:18 PM No comments: