From the Workbench: Rusty Blinky and Bug Shells.

Ms. Blinky is on the paint station and got the sloppy overall rust treatment. The same basic treatment as the standard troops... HERE .She will get some more snazzy washes and inking, not to mention the possibility of some weathering powders, just because she is a center piece. But, this gets the basic colors in....

And I've been playing with my carnifex carapaces.  Tons of greenstuff to make it look 'solid'. Still, in progress, obviously.... but coming right along. I just got the bitz in the mail today that I've been waiting for to help with the "undercarriage" part of the body. Next update should give you a pretty good idea of the general look of the end result. Of course.... I'm making a lot of it up as I'm going along too. :) 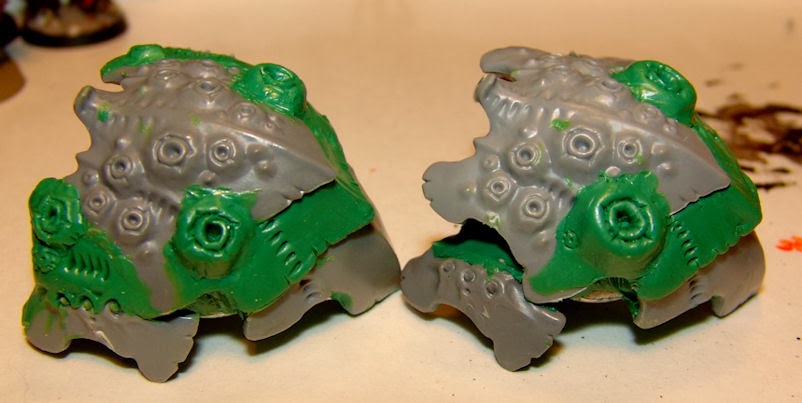 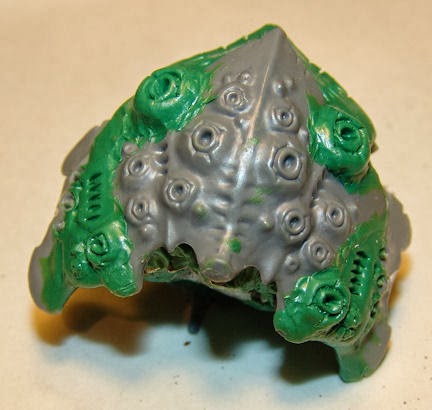 And more work filling in the devourer arms. Except for detailing, they are close to done. 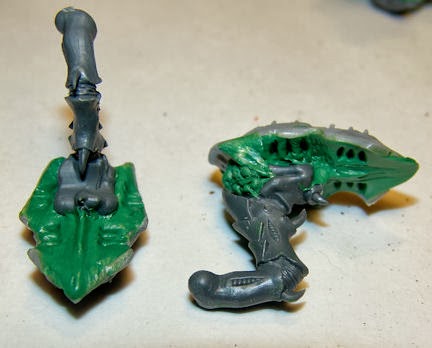 That's all for now. Should get another update up around Sunday/Monday, but maybe sooner if I can find more time to paint. There's lots of artwork and "real world" things on deck to keep my hobby time regrettably slim this week.

Never look a gift horse in the..... hey! Something smells funny!

A friend told me his brother was getting rid of his Chaos army and I was welcome to it if I wanted it. Since I'm babysitting some kittens for him, its was sort of a thank you/down payment gesture or rather he just didn't have space for them since he's in the middle of a move. So, being a sucker for free minis (Mekk's rule #2: "Yous can nevva 'ave too many bitz!") I said "Sure, I'll take 'em off your hands" 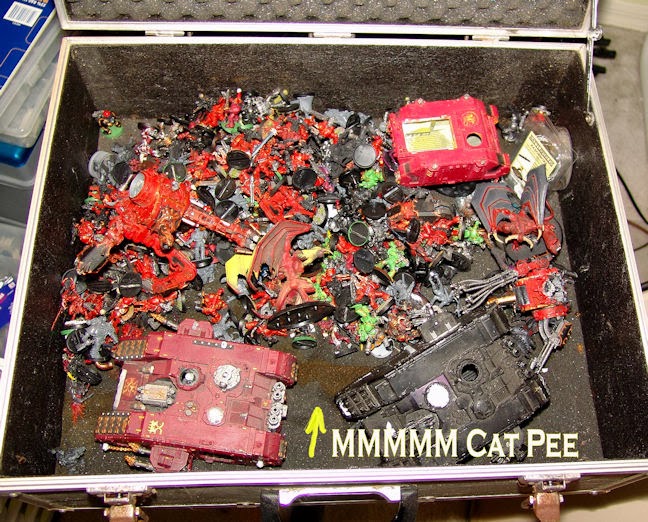 How many of you store your minis like this?

Like I said, basically free. there's a ton of minis and vehicle (TWO land raiders).... they all smell like old cat pee and a moldy basement.... but they were free. He did warn me they were in rough shape, so I kind of expected some of it. Some.  The first step, sorting and getting rid of the case. Luckily, tonight is garbage night.

Most of the construction was pretty straight forward to downright sloppy, so I have a LOT of clean up work ahead. Doors are missing on the vehicles. I have a Defiler and ahalf...... which I'll likely cob one defiler together out of. But there are two plastic deamon princes (in pretty good shape), a Rhino hull, the afore mentioned Defiler and a half, 2 land raider hulls in various states of disrepair, a hellbrute (Stompy needed a brother) and an OLD metal Chaos Dread which is in good shape... that might be a kick to get straightened out..... that's the big stuff.... 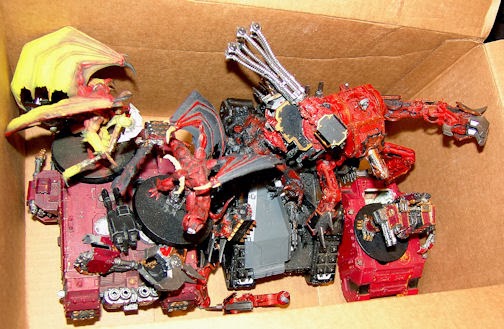 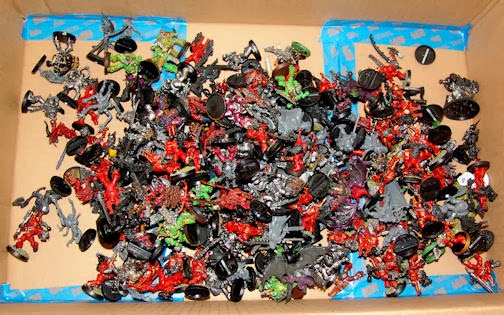 After being stored in the case with the foam that had cat urine in it, plus whatever other "old basement" smell it has going on, the miniatures have a definite funk.  I actually wore rubber gloves to sort them.  There was a pretty complete Chaos Dark Vengence set, mostly unpainted, a bunch of Khorne deamons in varied states of repair but in general good order, though pretty much 'slapped together' as far as construction was concerned, Kharn, A terminator Lord, Typhus (because I need another one) and a hoard of marines, mostly Khorne berserkers. 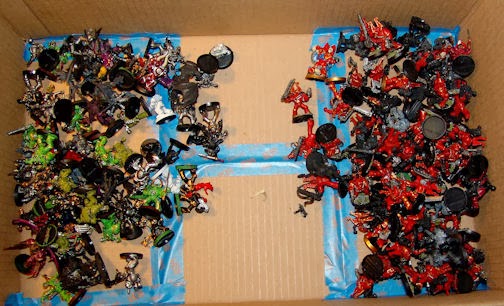 This is minus the Dark Vengence set and Deamons. Khorne berserkers on the right, everyone else on the left. EVERYONE...even the unpainted plastic is getting the Krud Kutter bath. A few of the Deamons went in for a dip tonight. I'll have to go off to the home improvement store to grab a jug so I can bathe the rest bit by bit. Not sure how much of this will make it into my Templars of DOOooom Army, but it seems the Dogs of Khorne contingent will be getting a big boost, which they sorely need....because they tend to suck ass in battle.  They better hope I can get one of those Land Raiders in shape for them, because I have a whole line of impatient Orky Meks just drooling all over that box at the moment. Definitely a battlewagon for the Boss  in there.

A little more progress on the Carnifex carapace sculpts. More on that in the next post.

From the Workbench: The World's Heaviest Carnifexes

Building on the the old Carnifex is turning into something interesting. There is just no way to not make it weigh a ton. Slowly, but surely its turning into something that will look more in line with the "modern" Tyranid line... but still be unique.  With my typical Orky engineering skills, this is the way the carapace/body is taking shape. Keep in mind, there is still a ways to go.... 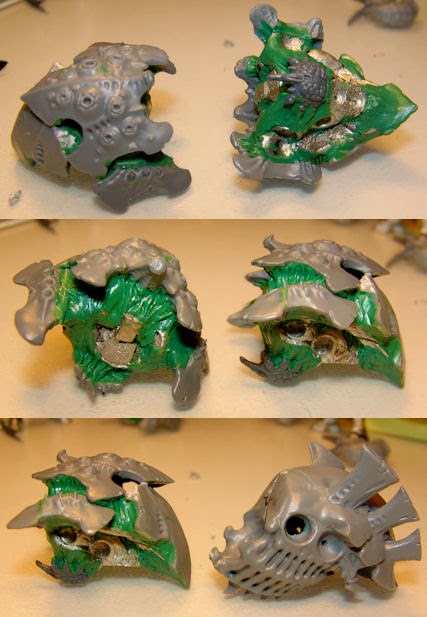 Eventually, the whole carapace will be shell. The vision I have (sketches to come) is of a barnacle encrusted swamp monster of sorts. The Splinter fleet/army I have in mind is an hive once thought defeated that has lurked in the dark corners of a world and regained its strength. Also.. they are tasty, when boiled with cajun spices... but not everybody knows this.  Kind of a tyranid version of this guy.... but with bigger legs.... 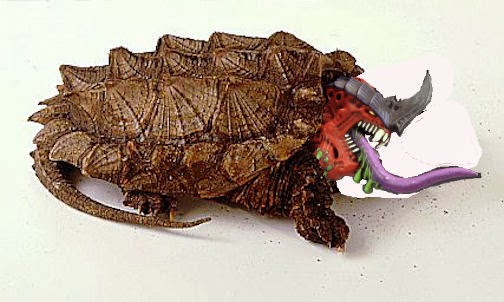 For one of the two, I have started a 'custom' set of  Devourer arms. Kind of helps with the crabby look and also gives him an extra set of walking limbs because he's a bit top heavy. I wish I'd had enough for both, but I thik the other may have a venom cannon...one of the few S-9 weapons in the Tyranid arsenal, short of engaging vehicles in close combat...which is always fun. 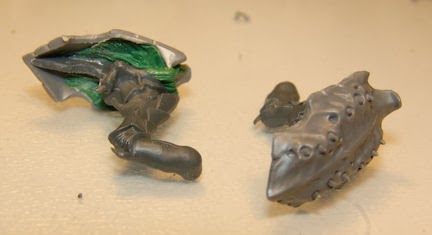 Just the start, still have to fill them in and make them a bit more weapon like, but you get the idea.

ALSO....Ms Charlotte got another pair of legs while I was waiting for greenstuff to dry. I'm endeavoring to get her finished up as this month, if possible. 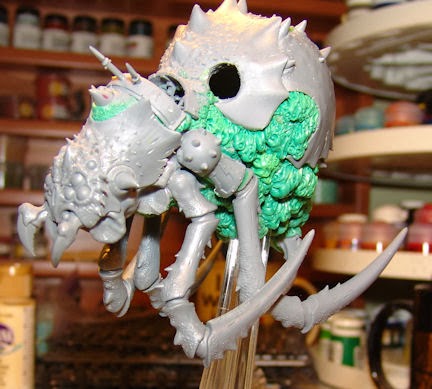 That's all for now. Hopefully I'll have another post @ Sunday/Monday.

Posted by Rednekkboss at 8:49 PM No comments:

"Bob" and "Black Bob" were the scourge of the tabletop at one time. This was when the Carnifex was the biggest, baddest critter in the Tyranid arsenal. Compared to the huge plastic monsters of today...well, the old Carnifexes show their age. Time for a make over. Here are the boys in their pre-make over condition... 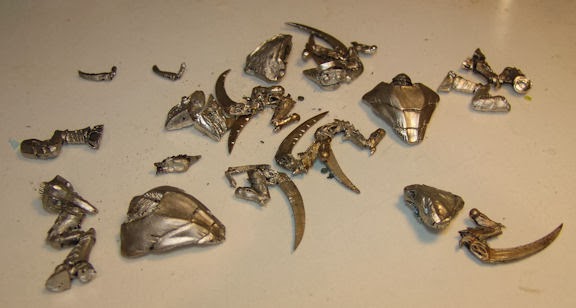 Here's a little comparison of the legs sizes... not entirely off on height. But, the critter definitely needs some bulking up. 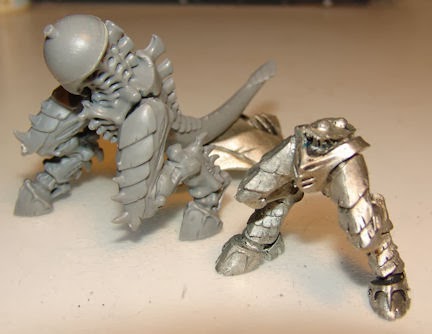 The big thing is the body shape. Totally different. Luckily, I have spare carapaces from the "modern" carnifex. So, its greens stuff and some Orky engineering..... 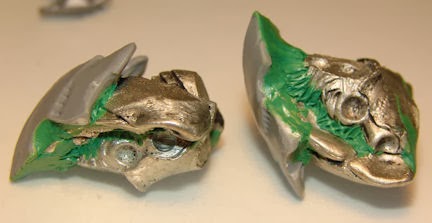 Eventually, I'll sculpt it to look a bit more in-line with the look of the newer model, but here's what I have so far... with a size comparison to the newer fex. 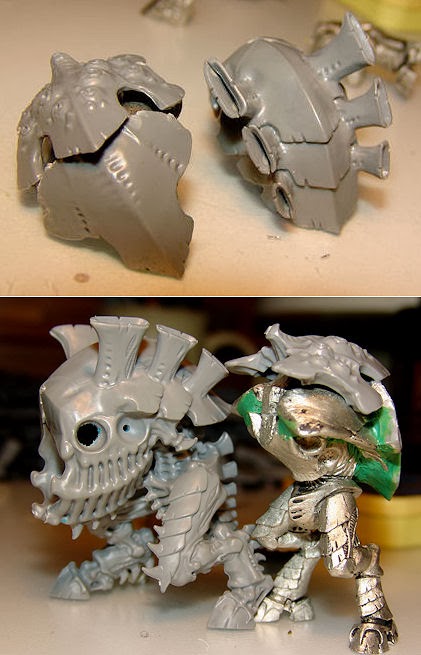 That's it for now. Hopefully, the real world can stop interfering with my hobby time. The plan is to get back to regular Sunday/Monday posts. Also there will be comics and artwork coming to my OTHER BLOG .

Cheers ya'll!
Posted by Rednekkboss at 8:09 PM No comments: