Not that most of you care, but I spent a decade of my life taking people fishing- for a living, usually families. Which means, I spent a good deal of that time dealing with kids a great,great, GRRrrrrreeeat way to build up your patience. It has been said I have "The patience of Job".... which I guess means I have alot of it.  But apparently not so much when it comes to sculpting a leech-like mouth on goofy looking Defiler/Stalk tank thingy.

After half a dozen attempts (and somehow managing not to throw the model across the room- though there was plenty of grumbling and screaming.... did Job convert models too?) ... I settled on the numerous rows of teeth thing. And here's the inside rows..... 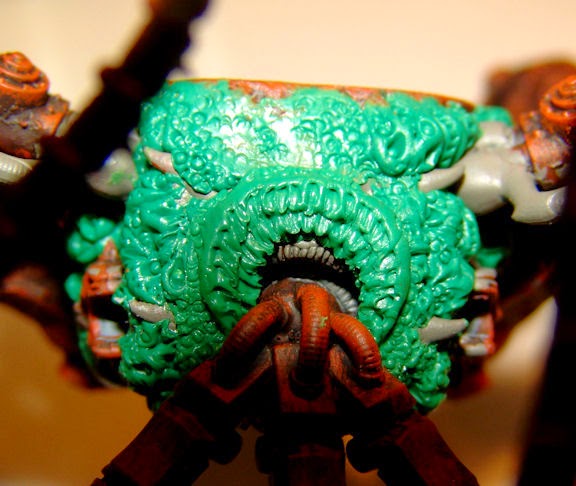 The teeth need a little clean up with an Exacto knife. This is what will be inside. I still have to do the lip over the outside and a mouth in general, so this is the beginning of the inside.  So... this is step 1.

And NOW...A slight Rant.... I know, I know.... I try not to, but once in a while us old gummers gotta yammer on a bit.I got my hot little hands on the new Rulebook.  As an "old hand", I would have loved to have saved $30 on the book of pretty pictures I didn't need. Otherwise, I'm getting a good giggle reading about the sky falling all over the internet. Its like reading the comments on news articles.... mindboggling hysteria and stupidity. Good GOD people, talk to your opponent before hand and just refuse to play against assholes. "OMG! The can take this detachment and that detachment and that detachment"...BUUuuuuuuuut...it still all has to be within the 1500 (or 1750or whatever) for the game. Settle down, talk to your opponents (Ohhhh no...40k is a social game again?!?) And I'm sure any event is going to have list restrictions,etc laid out ahead of time... or at least they should. Bringing the "O" back into TO like it should be. (And yes, I organized events in the past...for 40k and numerous IPMS model shows, it should involve work to some degree. Lazy TO's  (and asshole players) are one of the reasons I quit playing events)  Don't be Hitler (we all know what happened to him.... and if you don't,shame on you- look it up) ....its a game, have fun.


Next time, Bob's stiff upper lip. The rebirth of yet another old idea and maybe even something ORKY! 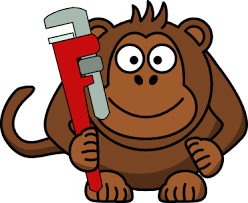 If you follow this blog , you know I'm not big on posts that don't have hobby content. But with the new 7th Edition allies chart its thrown a bit of a monkey wrench into my army.... at least as I have been using it.  However, being the ever resourceful Orky Mek that I am.... I guess I'll just have to make some not-so-loyal loyalist Marines to be Battle Brothers with my not-so-loyal Imperial Guard er,uhm Astral Miltitialarium ,er whatever ya call 'em. Honestly, for a hobbyist, there are always options, though it does always seem like I have to change my armies around with every edition. And this edition was a bit quick in coming. I mean.... didn't I just buy a rulebook a few months ago? Must be because I'm getting old and time is flying.

Anyways, back to Bob....and his mouth.  I have no pictures to show, but I can give you an update and this BEEeeeeeautiful picture....

Imagine if you will, instead of a single flat sucker, a number of sucker "lips". That's where I'm going with Bob's mouth. I tried several methods for crafting teeth (and took photos that just didn't come out) out of styrene. Finally, I ended with ...of course... the most tedious, but it will look the best. So each "lip" or coil of green stuff will have a row of nasty looking teeth, which are like hooks.  So it will take some time. Hopefully, I'll have at least one lip or so done by mid-week to show.

In the meantime, I just got my hot little hands on the new rulebook which I'll start to absorb.... slowly. Hopefully, I'll get to actually play more games with this edition than I did the last (as my wife sarcastically pointed out today) And Games Workshop is going to complicate my hobby plans by giving me a new Ork codex, so I may have to dust of Da Rednekkz! Still working on my hobby room as well and doing an inventory of sorts. I think I'll be doing a Chaos version of Creed, just for giggles in the near future.

That's all for now. Cheer's Ya'll!
Posted by Rednekkboss at 6:19 PM No comments:

Smilin' Bob was first created from the leftover parts of a Leman Russ and a Defiler kit that I converted with a Warhammer Giant.... long before the first appearance of the Soul Grinder. (his name is "Ahhhnold" and he'll be getting an upgrade in the near future too) Smilin' Bob actually had one eye and a smile in his first incarnation, but my sculpting was fairly rudimentary at the time. Then came the Templars of DOOooms many battles against the Tyranids in the ruins of Petrastad, where poor Bob was repeatedly 'violated' by Trygons on several occasions, very often on his rear armor, if ya' know what I mean. Thus, he became Not-so-Smilin' Bob.

He got an upgrade after the last codex. I pretty much slapped on a new faceplate (which had no smile) added the scourge tongue and brought Bob back with a bit more attitude. I also (kind of out of character) slapped a bunch of paint on him just to have paint on him to play in a league at the LGS.

After the latest additions to my army and the way the has evolved/is evolving, I figure good ol' Bob needs an upgrade too. The first thing I did was give him a good look over and found more than a few pesky seem lines that needed scraping. Bob had also been the guinea pig for a sand = corrosion/rust technique I was trying out with some success. Looking at it now, I think I was a bit overzealous (to be kind)... but I'm not about to scrape/sand sown the whole model.It does add some interesting texture and I'm thinking I can have some fun with it when the painting happens.

First up, was a little added gribbliness for the turret. Just some simple things, more in-line with Blinky,Charlotte and the Sentinels. The rest of the "flash" will come with the painting. 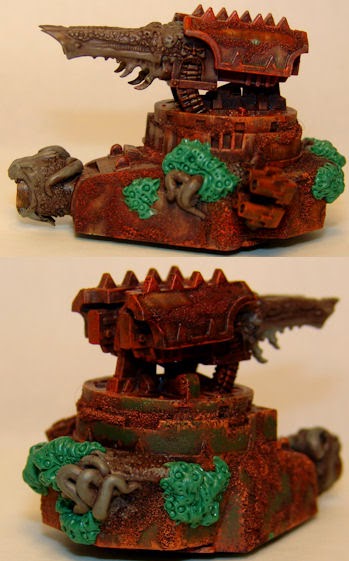 The main body is a different challenge. Most of it is done, except the front end is still being worked. In the end, Bob is going to get a new 'face'. I haven't decided... but he may end up with one eye, since its a reoccuring thing. At this point its still much in the process.... but here's what I have so far.  The right side is the most far along. 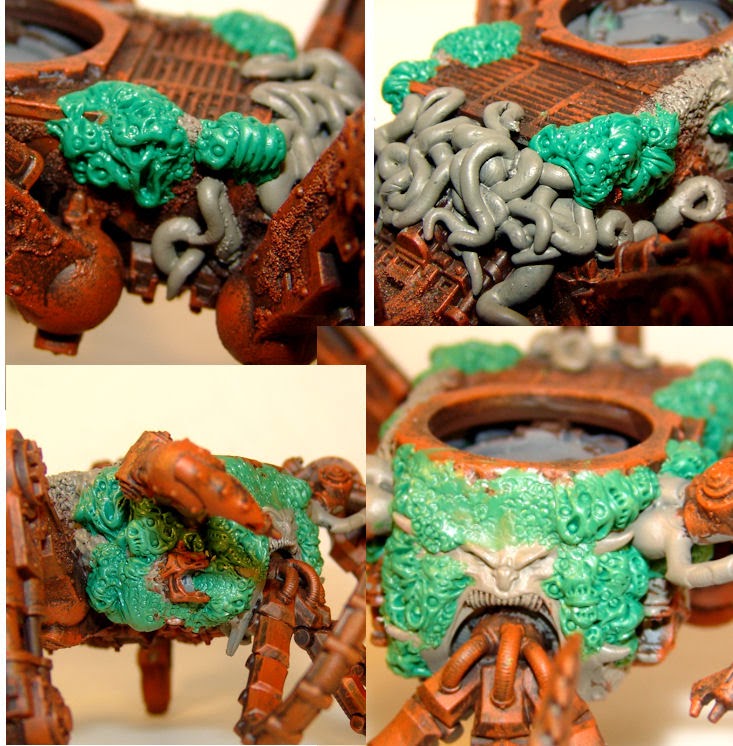 I got my EYE on you!

Ms. Blinky in all her glory! She's done and I'm happy about that. I know...I know, shuddup and get to the photos!

AND... the front quarters.

Here's a close up on her horked up nastiness.... 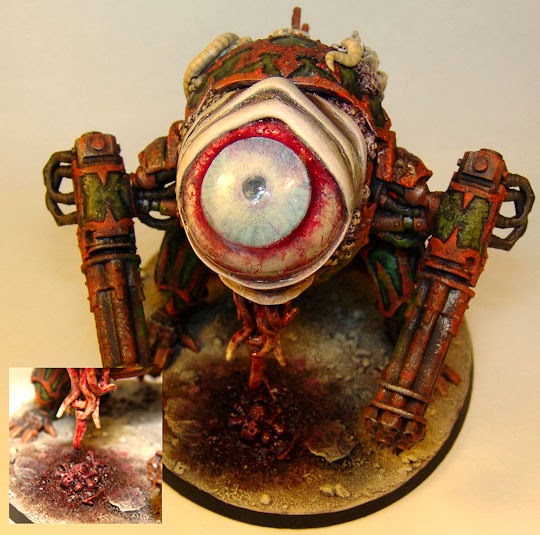 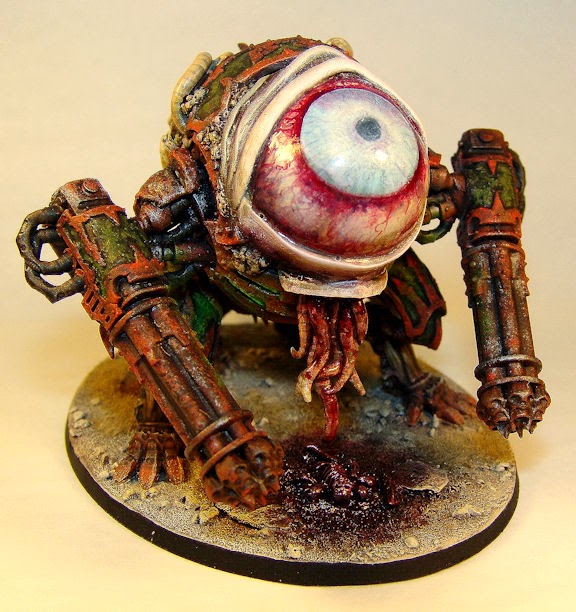 1 down, a seeming billion more projects to go.  All of the roadblocks/hurdles that have kept me from regular updates are pretty much out of the way so I should be doing regular weekly updates in the Monday evening/wee-hours of the Tuesday morning (EST-USA) and maybe the occasional shot later in the week if something cool happens. What's next? I'm not sure, but I can tell you straightening my art/hobby room is first on my list before I get anything else going. Its good to be back.