First, an update on That Rhett Bastid! 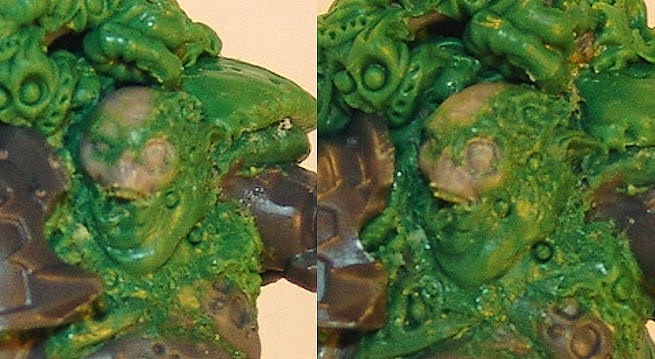 After.....
The face is coming together nicely. Not quite done yet, but closer.  His butt, however is done. 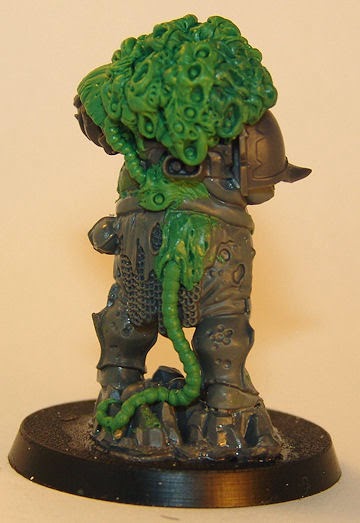 And as long as i was working on faces, it was time to get to Ms. Charlotte's.  I wanted to bring in more of the  deamon engine / creepy cyborg into the model since I opted for fleshy wings. This is the beginning of a beaten metal head section with all sorts of tubes an wires and such. Not to mention, two big lense like eyes. 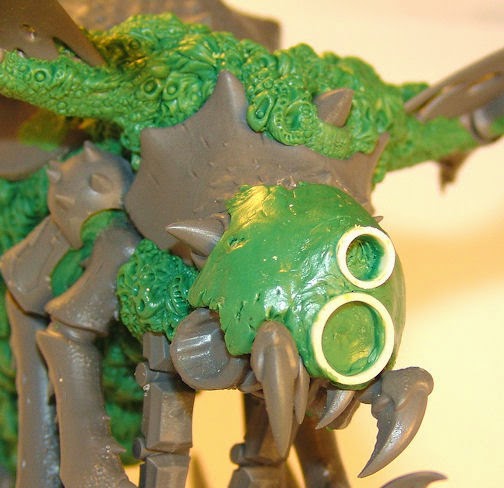 I had some folks on one of the forums ask about what tools I use for sculpting, so here's a little rundown of how I do things. Its not the "right" way or the "best" way, no doubt... but its just the way I've come to sculpting over about a decade of trial and error, watching more than a few videos on Youtube and ... most importantly... hours and hours of screwing up. 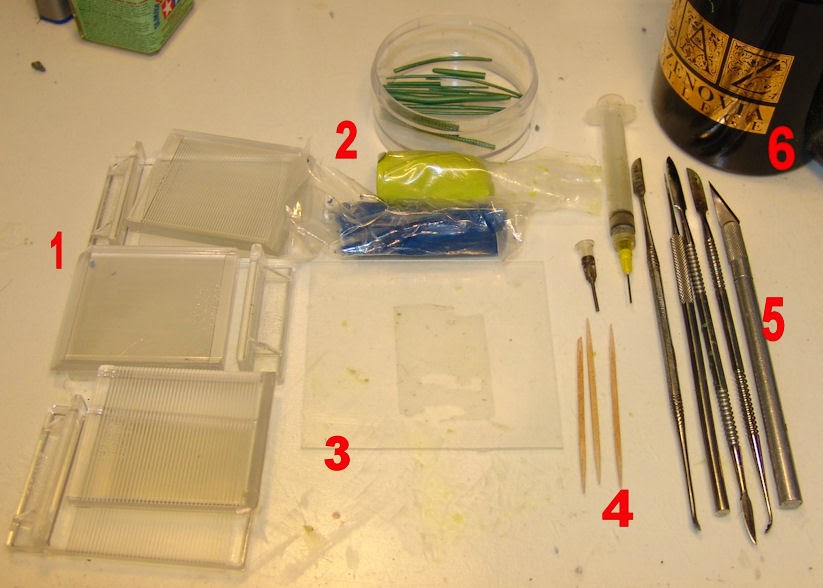 #1:Tentacle Makers - the most recent addition to my sculpting kit. Tentacle makers from Green Stuff Industries . These tools, which I'm still figuring out the nuances to, take your fabricating abilities to a whole new level. They also have basic sculpting tools and alot more. Customer service wise, they were a joy to work with (since I had an issue with paypal) Worth every single penny. Basically, to use them you dab the surface with water, put a green stuff coil down and rub the top piece across the base.  Varying the pressure and angle or taking out a coil and rolling it, there are many,many effects you can achieve with these things.

#2: Green stuff.  Hard to do any green stuff sculpting without it. I always try to match the blue and yellow in equal amounts. Yeah, I know that sounds a bit basic... but you can tweek it one way or the other to get a different feel. More blue, hardens a bit quicker, more yellow is stickier takes a bit longer to dry.  Working with wet/ moist fingers (some folks use gloves- I tried it, didn't like the fact that I couldn't feel the green stuff to sense if it was starting to get tacky- its a personal preference) and tools is a must as much as possible. Supposedly, the stuff is non toxic. I wouldn't recommend chewing it to mix it or keep it wet in between sculpts though. I make tentacles,power cables and just roll up coils with my left over green stuff or if I mix too much and its starting to harden and keep them. Little round balls of various sizes can be handy too.

#3: A piece of Acrylic. In this particular case, its half of a $.99 magnetic frame from a local craft store.  Dab water on this with your fingers and set your Green Stuff on it while you are sculpting for a no stick holding area. Also provides a nice wet, no stick surface to roll coils on or do any flat sculpting you might need. If you have two pieces you can use them to roll coils without fear of fingerprints.

#4: Toothpicks.  If you don't have a tool that will do what you want it to, make one. All you need is an Exacto knife and a bunch of toothpicks.  Dip them in water (or put them in your mouth... just before you get green stuff on them,though) and go to work.

#5: Tools, Metal tools. A good set of basic sculpting tools. One purchase, one time... and you are set.  You also see a couple syringes, which I use for making pock marks and other little circles.

That's all for now. Hopefully, I'll be getting a game in this week, which would be nice.

I built a Vindicator a few years back and tried a sand and glue technique for rusting effects. Since Daemonic Possession is something I'd likely use, I figure since my sculpting has improved quite a bit since I built this guy, I'd give him an upgrade to fit in with the asthetic of the rest of the army. 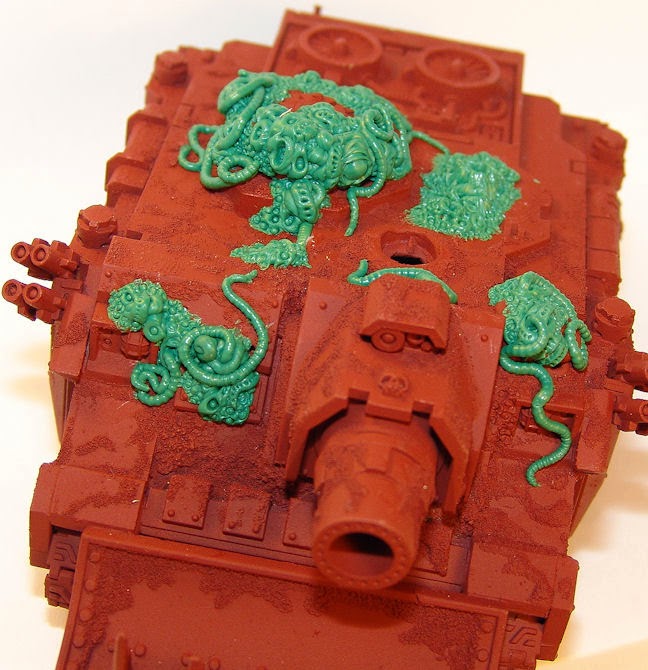 I'm loving my tentacle maker from Green Stuff Industries . If you do any sculpting, its worth every penny.   I also did some work on "Typhus"  Since most of my zombies are going to be converted Skaven, I came up with this character, Rhett Bastid.  He's got an unhealthy relationship with rats. So much so that Grandaddy Nurgle decided to give him some "gifts" to make him a bit more like his disease carrying furry friends. There's still some more work to do, but this is Step 1 of his face, based on half of an old Warhammer fantasy Chaos Warrior mutant head. 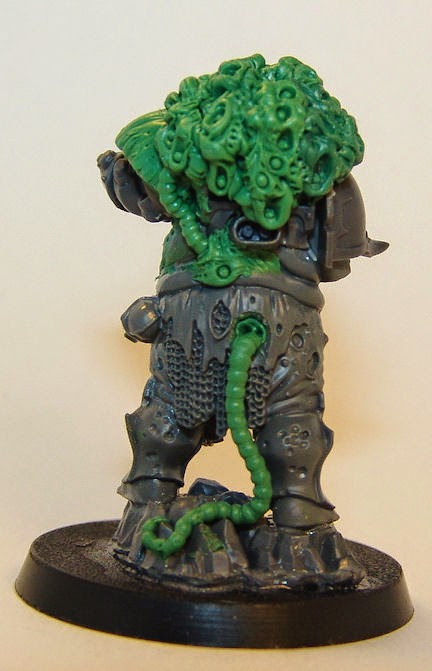 I'm going to cover the base of the tail with cloth or skin or whatever that is around his waist.  Still more detail work to be done. I went to the store and got some of those 2.5x "reading" glasses for sculpting...we'll see how those help with the close up details, since my magnifying lamp and tools don't like to play well together.

That's all for now. Cheers ya'll!
Posted by Rednekkboss at 7:05 PM 3 comments:

Lots to get to!  First, there are new shoulder plates for the Khorne Dogs. Regrettably, my order came up a bit short and I have to order more to finish the unit, but most of them look something like this.

But mostly, I've been busy sculpting.  Here's what my Typhus stand-in is looking like so far..... 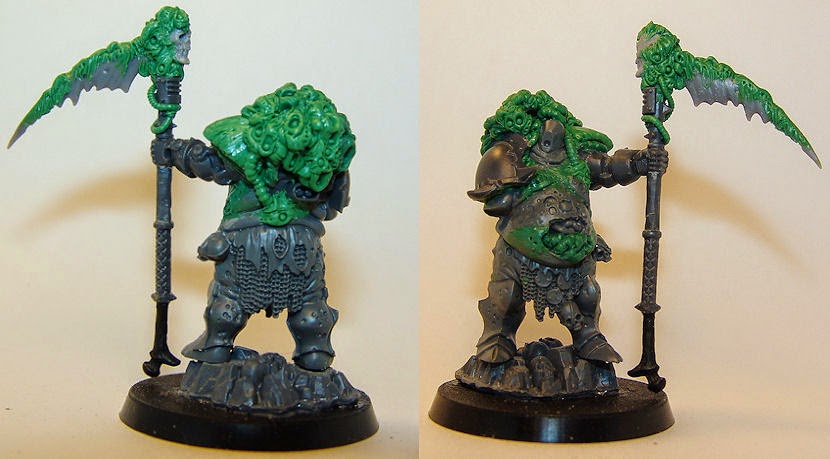 And now for the big suprise. I dusted off Ms. Charlotte ....and now she has wings. 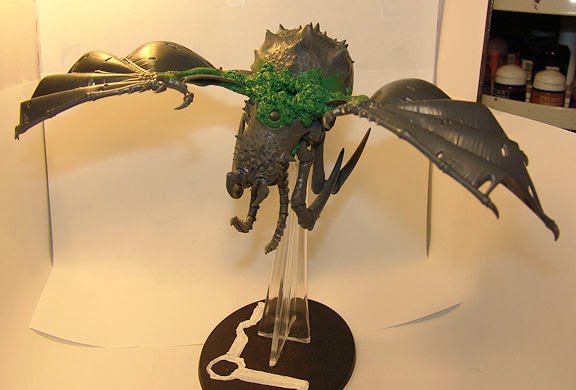 After a long, long, long period of agonizing over what wings to put on her, I went with Hive Tyrant wings. It got a bit nasty from there once I got the green stuff out.... <evil grin> 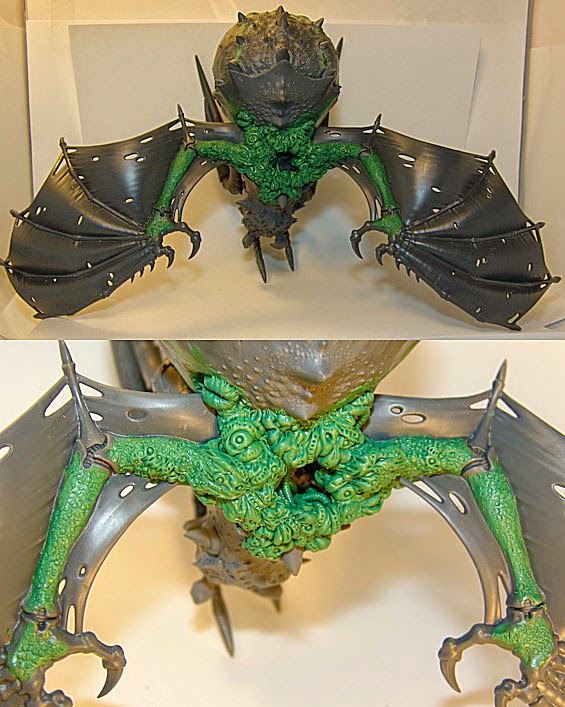 And my little screaming skeleton guy is still hooked up inside. :) 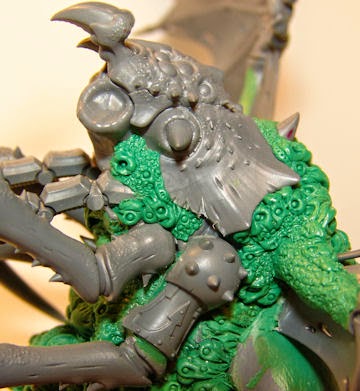 Hope you like it so far. Lots more to do.

The Fly Guy and Fly Gal.

Looks like I'll actually get to play Warhammer 40k in the coming week. It'll be my first game of 7th Edition. After putting together several lists with the miniatures I have available (I can't actually get to my whole collection because the house is still not back together yet) I decided I'll be working on the boys in the list over the next few weeks to get some paint on them and finish them off. It'll be interesting to see if the losing streak continues for the Templars of DOOooom!

I ended up proxying a few minis here and there, so it has become clear I have a few holes to fill. One of them, a Sorceror(ess) with a jumppack (wings).  Here's what I have, so far... Of course, no plague army would be complete without a Typhus stand-in. Here's the beginning of mine... 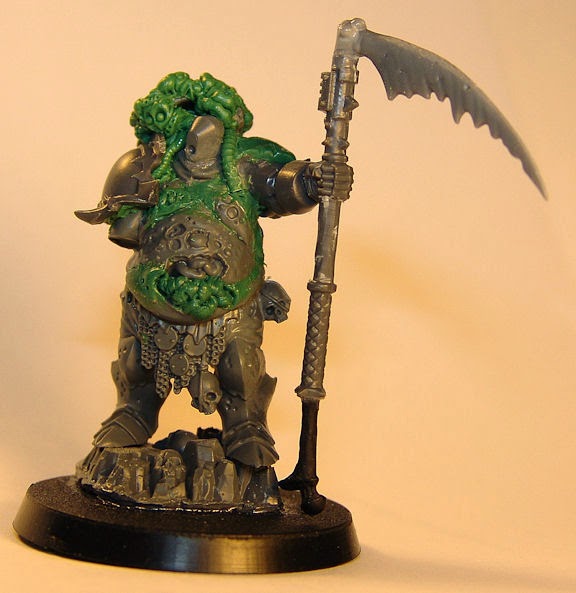 And a close-up on the sculpting so far....

Lots more work to do to make him gross and disgusting.

Eventually, I'll have to get at least 10 more. Of course, I've shot myself in the foot by painting them nicely. Its going to take a Looooooooong time to paint a hundred Orks like this is I don't temper myself to painting them simpler. Here's a close up on the last three I did.... 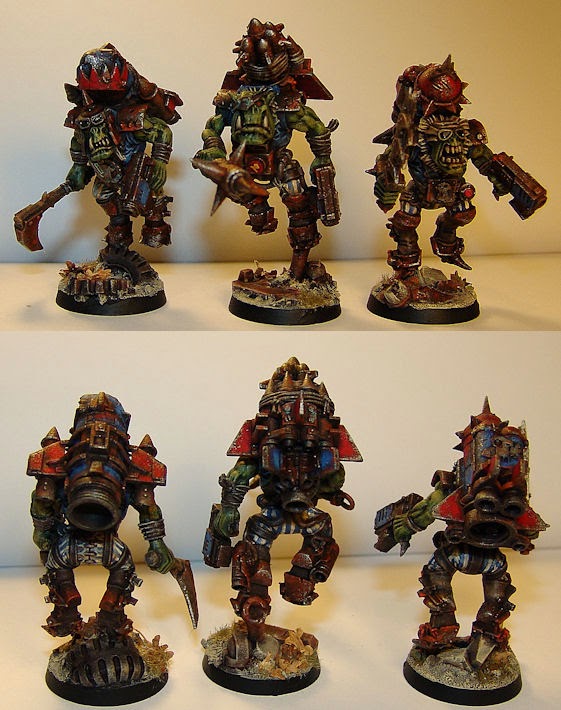 The next batch is my plastic plaguebearers. I forget where I read on the interwebs of folks complaining about how these guys don't have as much character as the old ones. Honestly, I LOVE this kit. Maybe its just folks with no conversion skills (or desire to convert) but, there's so much that can be done. I was only tinking of a very small deamon contingent for my Chaos Army, but I may collect enough to have a playable deamon army. Nurgly, of course... maybe with some Khorne. Of course, I'd actually have to play the game. I tried to get in a game the last two weeks and the real world keeps throwing me curve balls. pesky real world, getting in the way of my hobby.

I figured I'd take the new batch a different direction than the old metal ones I painted. I primed them with GW Bleached Bone spray. Then, I washed them with Army Painter Quickshade: Strong Tone.  Once that was dry, I hit them with my trusty old GW Althonian Camoshade. (Steps 1-3, right to left)

Next, will be to work on the skin and details. But, that's for next time.