Of the 6 "captured" vehicles in my Traitor Guard army, 3 are now officially DONE....
First, the Devil Dog. OOoooooo RAH! 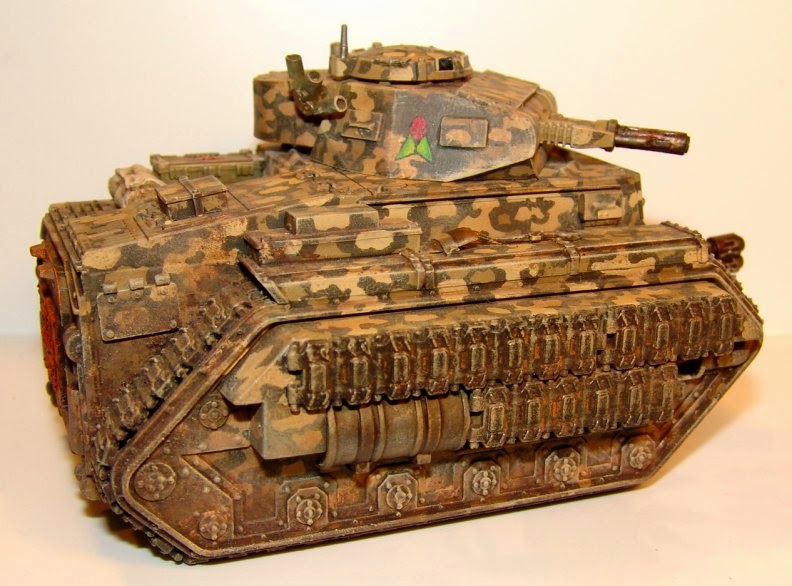 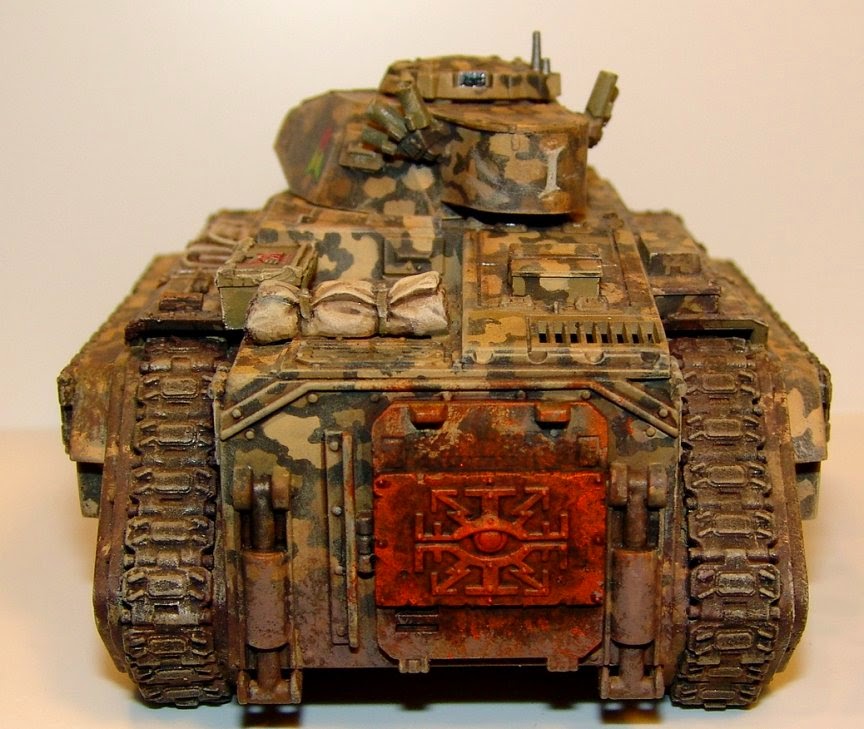 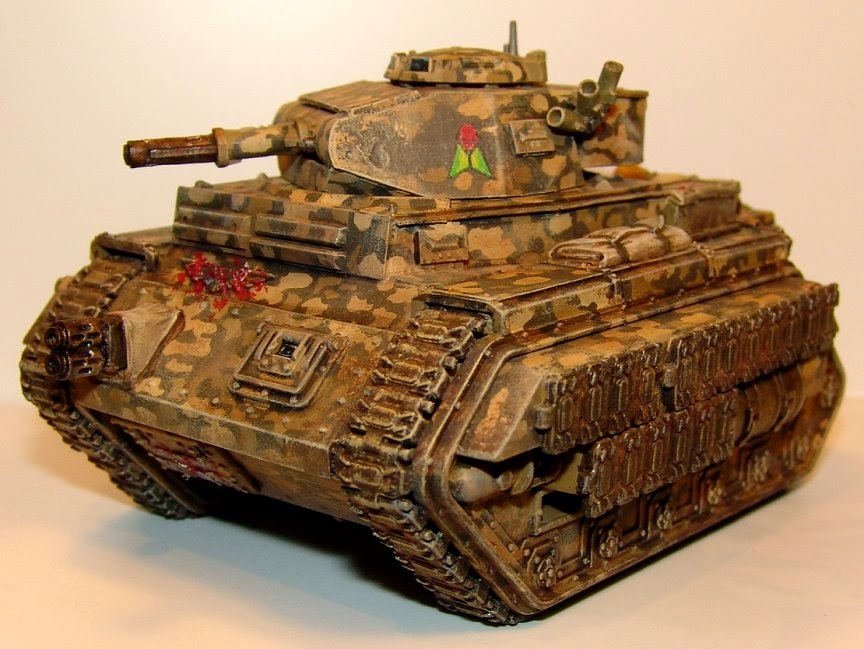 A close-up on the Sons of DOOoom / "Bloody 7th" badge prior to weathering.

Next, what used to be my Griffon. Now its my...uh... Stug that sits on the shelf and/or proxy Wyvern. 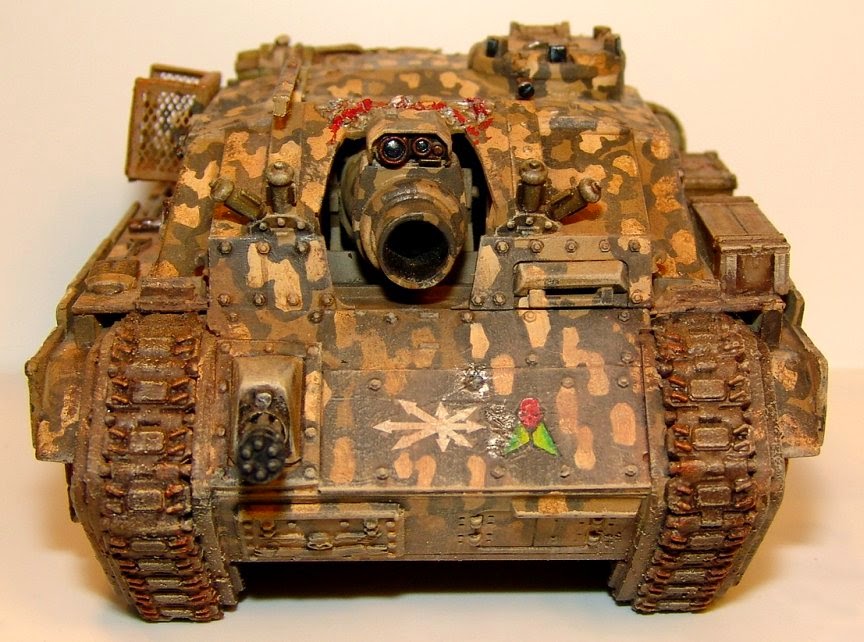 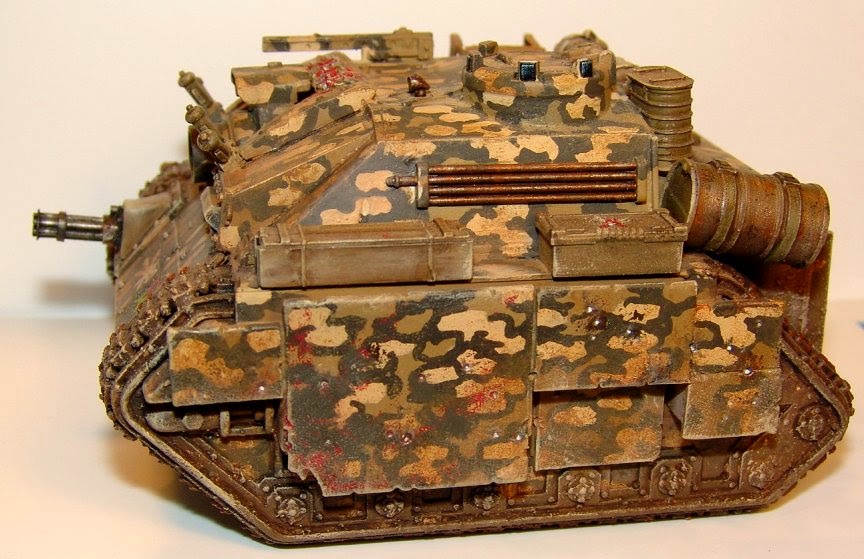 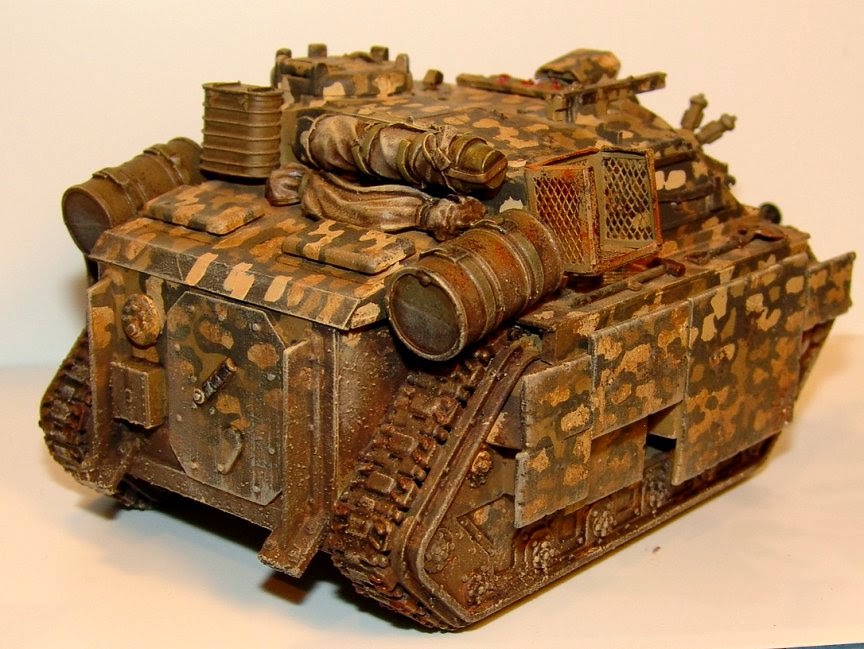 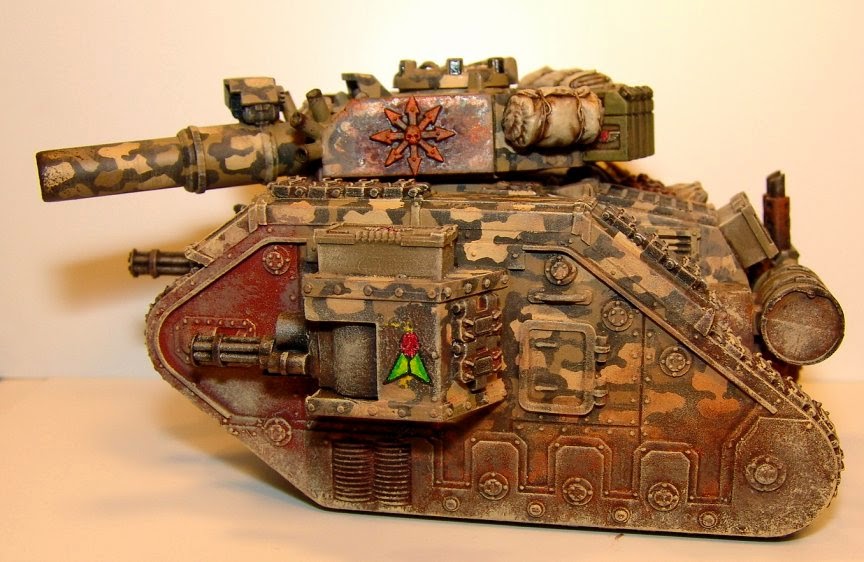 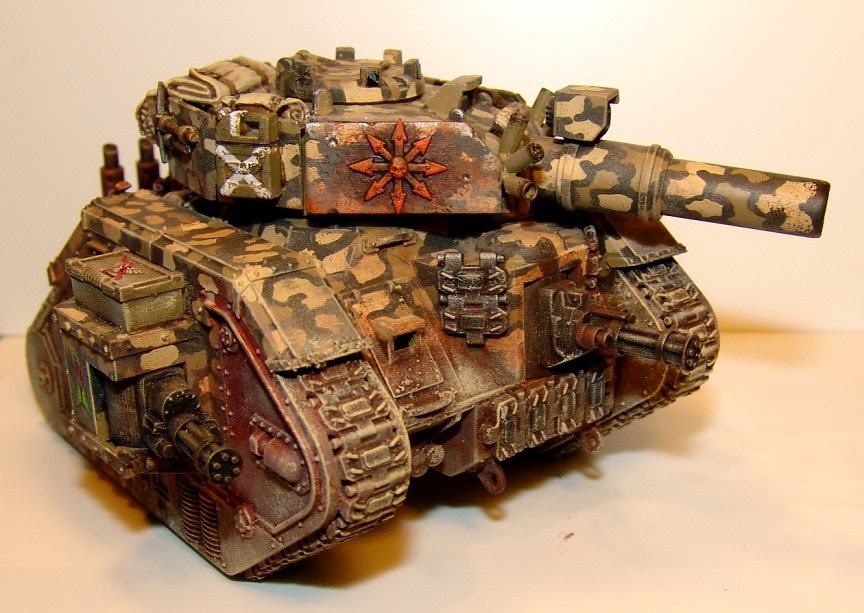 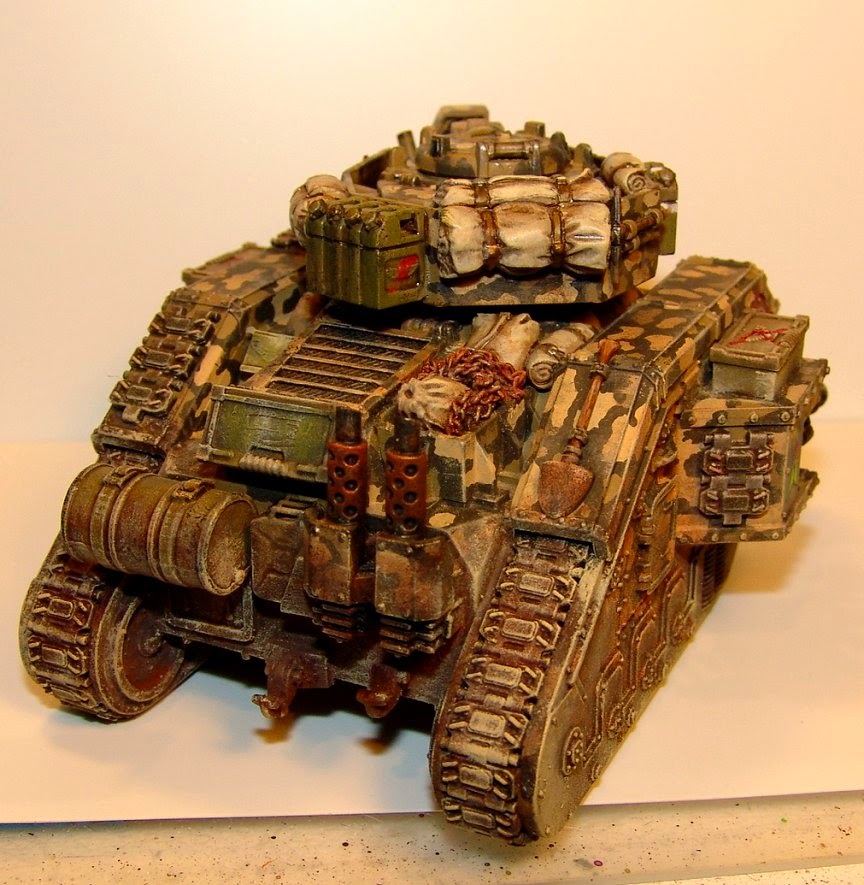 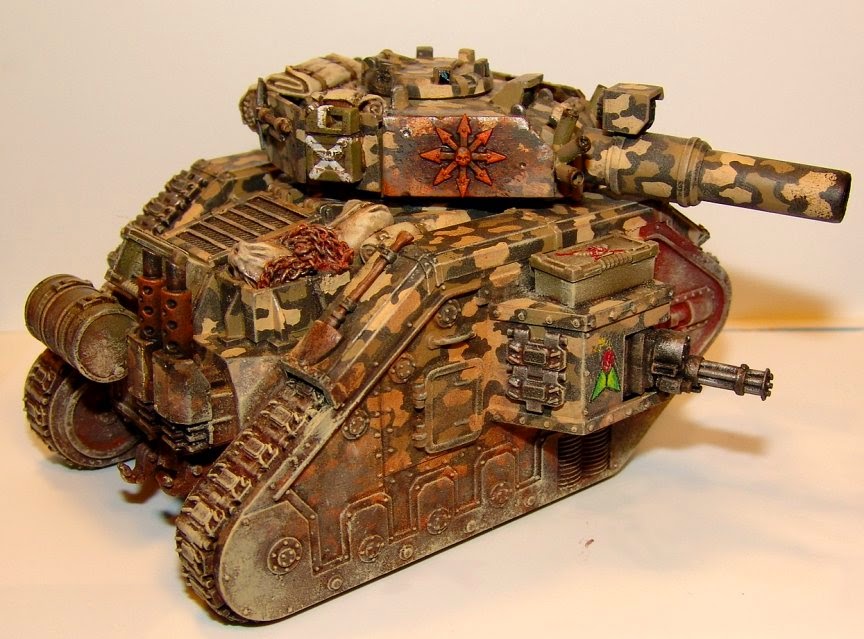 That's all for now. I'm getting a bit fatigued with this project, but all I have to do is finish the gribbles on 3 engine housings and they are basically finished. Then I can move on to something else.

From the Workbench: The Turrets are Done!

So, the turrets for the 4 Leman Russ' are finished.  Now, on to the engine compartment gribblies, some weathering, a few piddly details and the Sons Of DOOoom's Tank Company will be complete.
Here's how the turrets came out.  I'm pretty pleased. 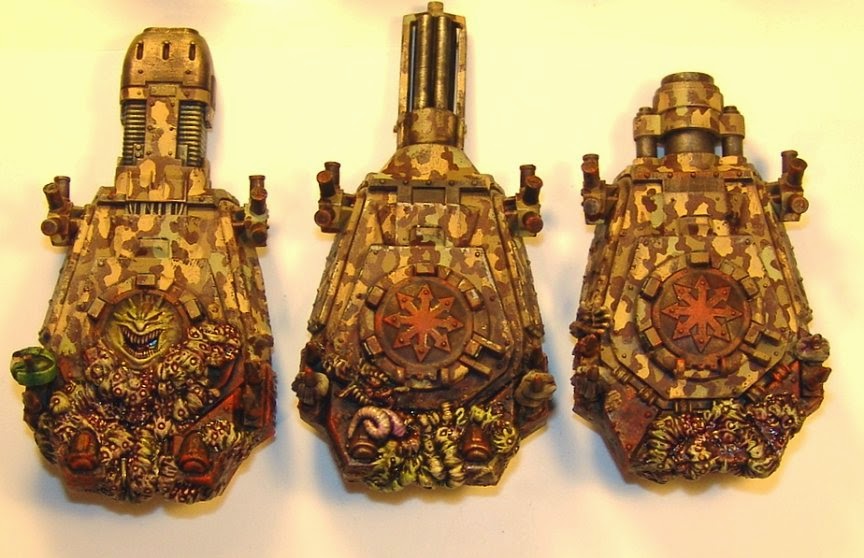 And a detail of the loyalist helmet on the Executioner turret. 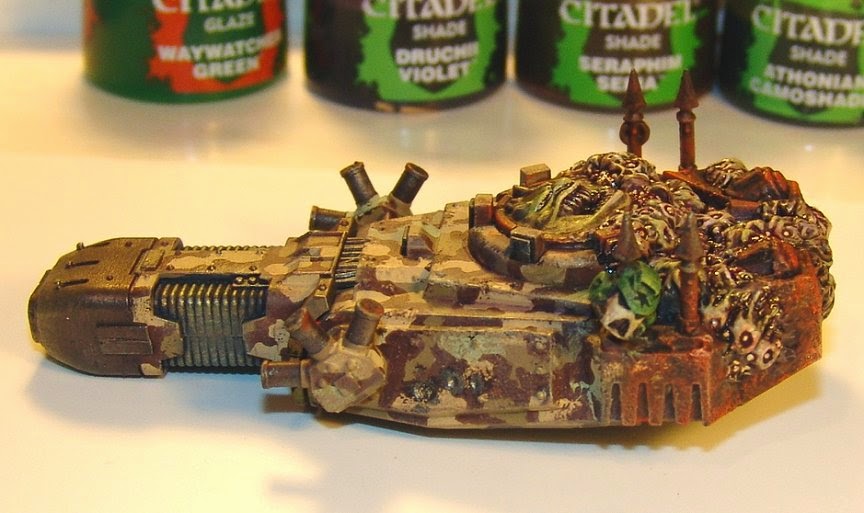 I added a chaos star to the MBT. Since those things tend to corrupt what the touch, I figured some rust wasn't a bad idea.

I've also gotten some basic work done on all of the completed "captured" vehicles (those with the mottled paint scheme) like spruced up the weathering and begun some wear and tear.  But before you do that, if you plan on any decals, its a good time. SO.. I came up with a decal bash that will serve as the Son's of DOOooom/ "Bloody" 7th's markings.  I intend to do some painting over them, but if you aren't afraid of the freehand, decals are a great way to get uniformed markings by using them as a template whenever possible. 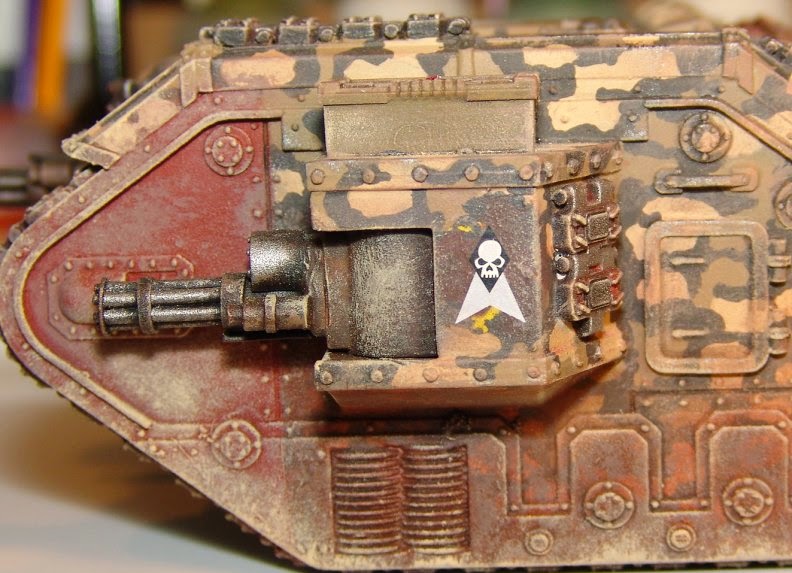 Basically, it will be a skull headed fly. On a couple of the hulls, there are old loyalist markings painted over and I want these to show through a bit.  I'll do a little outlining and the wings will likely be light green or yellow. I may add a sickly green outline too, depending on how it comes out.  But there is stands for now.  Hmmm... that might make a decent post in and of itself.

You've Got a Little Something on Your Turret.

Painting of the possessed turrets continues.  Over the initial detailing of the fleshy areas, I added some highlights with a very light pink. Now, its ready for washes. 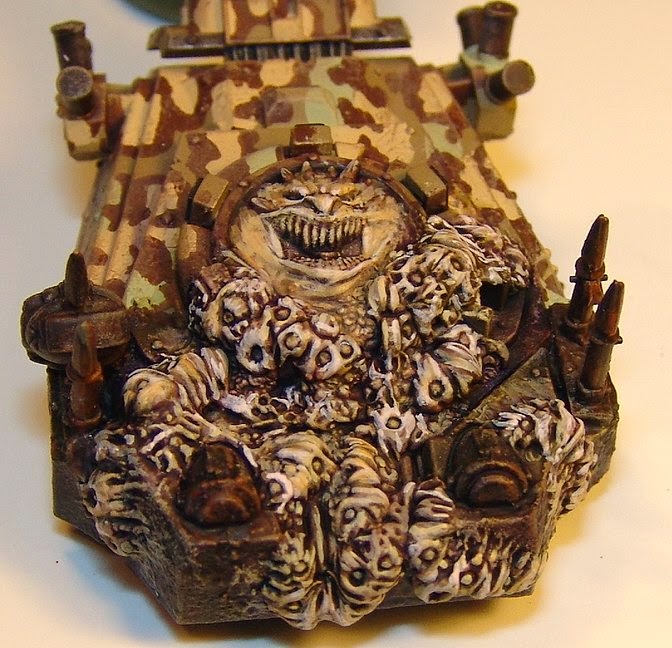 There was an all over wash of GW Althonian Camoshade. heavier in the creases and a bit thinner with water overall.  Then GW Druchii Purple in the deep recesses and out onto the corrupted bits of the tank to deepen the background color.  After that dried, I added some GW Carroburg Crimson to select fleshy areas and around the "pimples/pustules"... to help with that raw,irritated look. 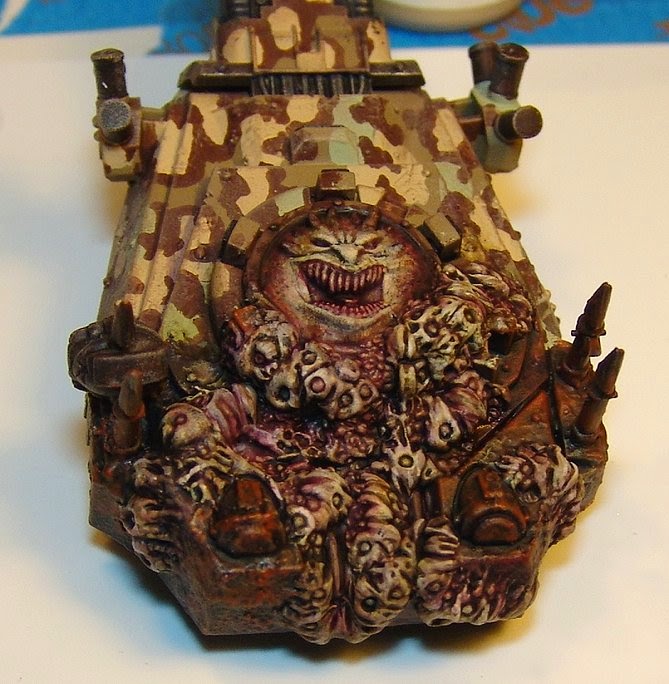 Once all that was dry it was down to detailing. Highlighting the pustules with a light fleshtone, darkening some of the recesses with a very, very thin Black. Doing the teeth and highlighting the lips etc.  Once that was done, I used GW Waywatcher Green glaze to pick out some parts with a brighter green to match the other turret that is done. It also helps give the "Bloody 7th" its own little distinction for gribbly fleshy parts.  And somehow, the deamon "Prask" face looks not unlike a bullfrog in complexion. On the right, the other turret is at the first wash stage... so you can see the difference. A few odds and end and the turret on the left will be done. Since I'm going to paint some more after this is posted, both turrets should be finished tonight. That puts me onto the tentacles and engine gribblies on 3 hulls next. Then I can move on to something else.  I'm kind of itching to build something, though I REEEEEAAALLY should continue painting  the stuff that needs finishing.

In other news, I picked up the Khorne Deamonkin book.  Assuming they will do this for all 4  Chaos Gods, I'll be eagerly awaiting the Nurgle one....of course, while fighting the urge to buy the Tzeentch and Slaanesh ones, just because.  My corrupted "Space wolf" project now has a new angle and I've also decided to drop the DOOooom Wolves as a name and just pick up with the hapless Dogs of Khorne, who are my 'not so effective' Khorne contingent with the Templars of DOOooom!

If you've been checking this space out for a long time, you might remember their exploits in a few of my battle reports (Gods I need to play a game some day)... one of their best was gunning down that Pain in the Ass Lysander with boltguns.  Because...ya know, Khorne guys excell at close combat.... but apparently, these guys are pretty good shots too (and my opponents dice hated him)  Usually the Terminator Squad, led by the Aspiring Champion, Chad can be found looking for easy kills like the enemy baggage train or field kitchens. Especially if there is ice cream. In there off time they spend an uncomfortable amount of time working out in the nude and rubbing each other down with oil, while insisting that its a warrior tradition and not at all homoerotic.

One of the challenges for me is going to be the Khorne helmets.  I hate,hate,HATE the Berserker fins. But...its an pretty Iconic look. There are some much better looking helmets on some of the Fantasy kits, which I'm sure I'll use for champions, etc.... but if you know you are going up against Khorne all you need is low ceilings and doorways. They'll be flopping like turtles. 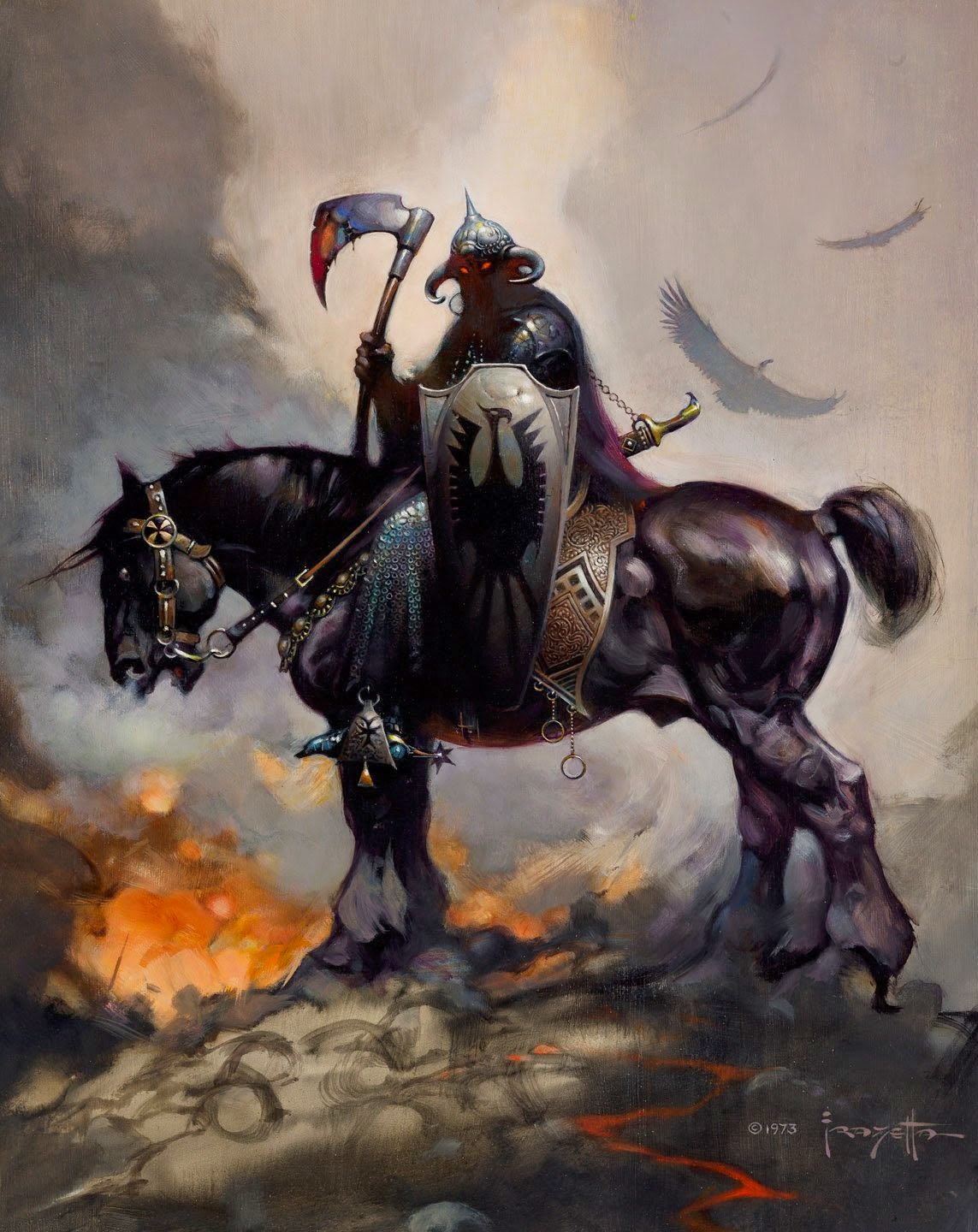 Anyways, the plan is still to go with a "raging barbarian" look and alot of burning from the inside with roid rage. And possibly an ode or two to one of my favorite artists, Frank Frazetta. His Conan the Barbarian works, along with the comic "The Savage Sword of Conan "(which had numerous great pen and ink artists) are what got me drawing people and thinking about art as some sort of career. Not that it worked out perfectly.... but I ain't dead yet. ;)  .... Cheers Ya'll! 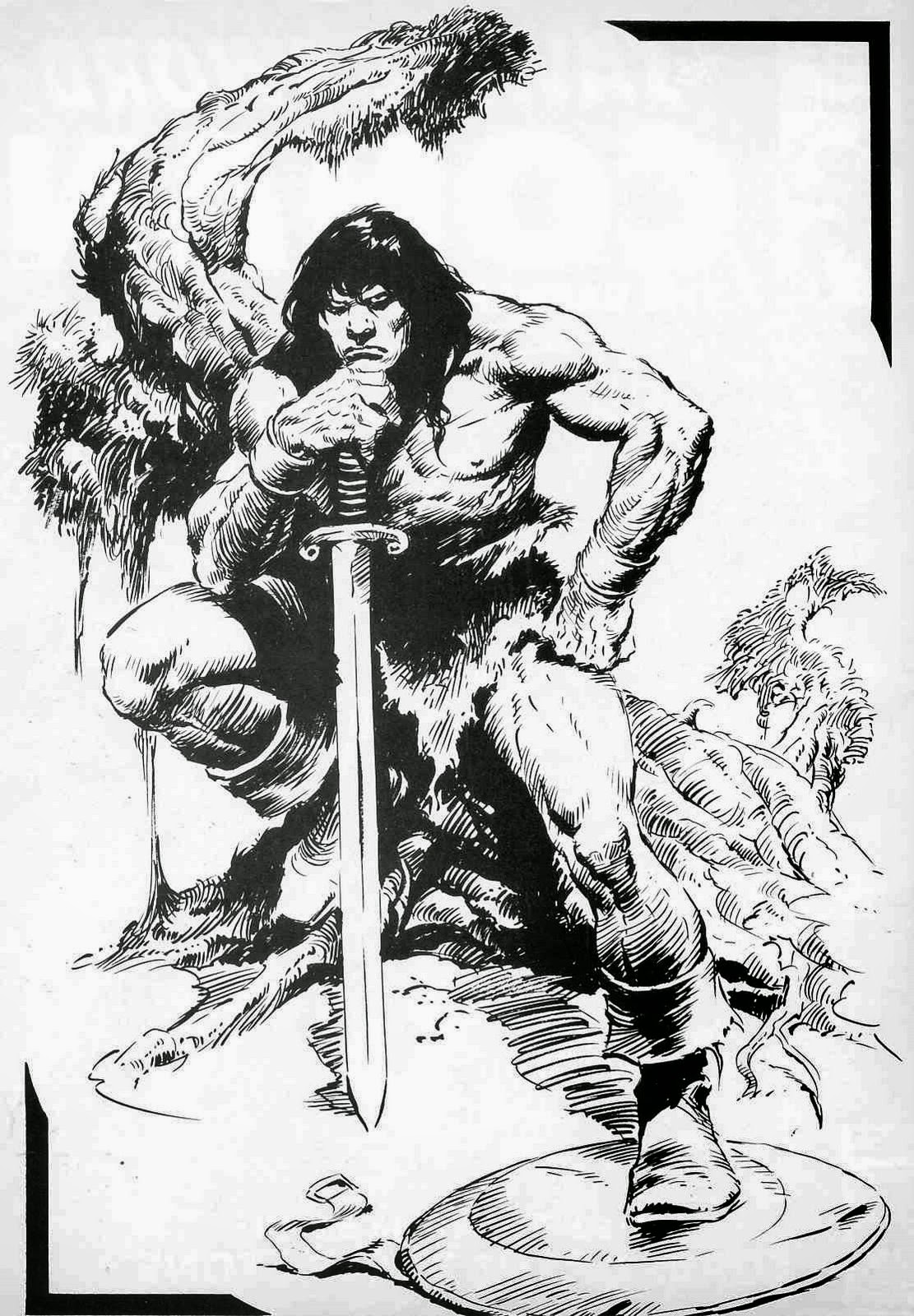 Well, I didn't really forget about them, but I did sort of forget they weren't done. SO, I got my Traitor Leman Russ' out of the tank park with the intent to actually finish them for good. 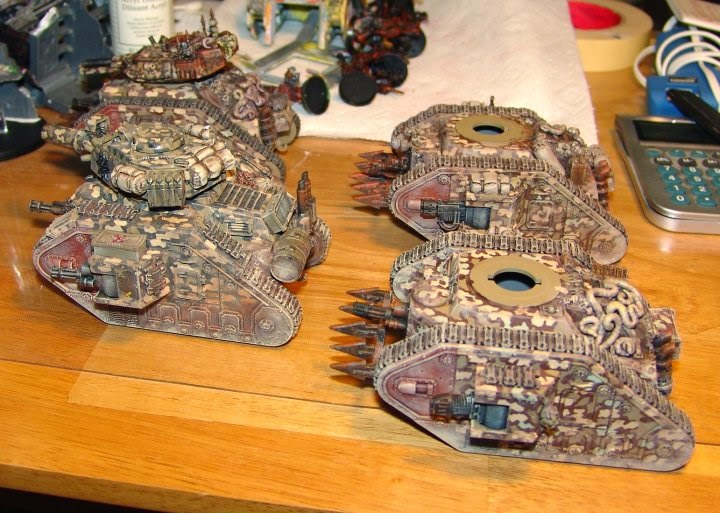 Here's the gang, sans a couple of the turrets.  There are turret and engine gribblies that need painting, then its a bit of detailing an weathering before they are complete. I might have to figure out some markings too.

At the start, the 3 turrets with gribblies looked like this. One is finished, while the others... just a base color. 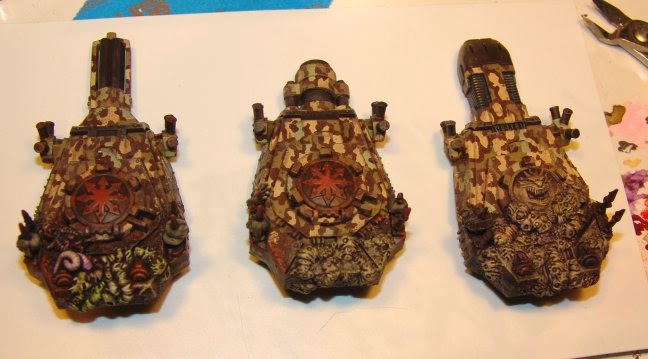 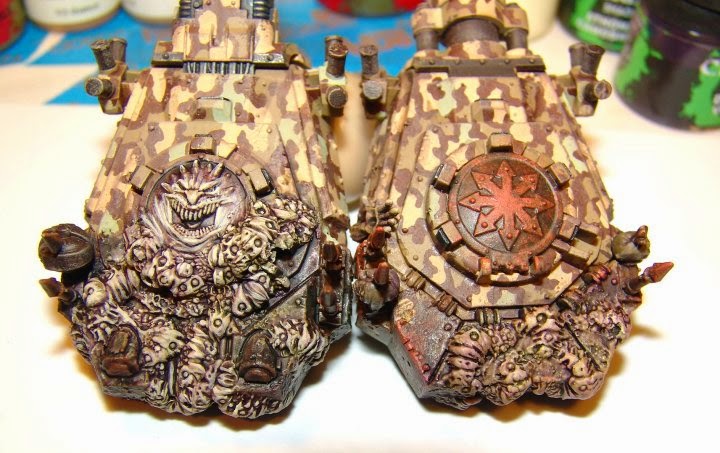 The one on the left has the first layer of highlights painted after the washes, while the one on the right is just the washes over the drybrushed base color. Next up.... all the mind numbing detailing.

I've also been working on the FREE MINIS I got a good while back.  The lads (and Rhino) have been soaking in Krud Kutter for a while, so I scrubbed a few the other day.  They need more of a soak though, while I find a better cheap toothbrush to scrub the next batch with.  All of the big models are done. I still have around a hundred Khorny Berserkers and others to strip, which will eventually be the basis for my DOOooom Wolves. I'm not sure what glue was used on these guys but after the appropriate time in the Krud Kutter, it comes right apart. Which from where I stand is friggin WONDERFUL.  It will make reconstruction and conversion so much easier. Thats it for now, gang. 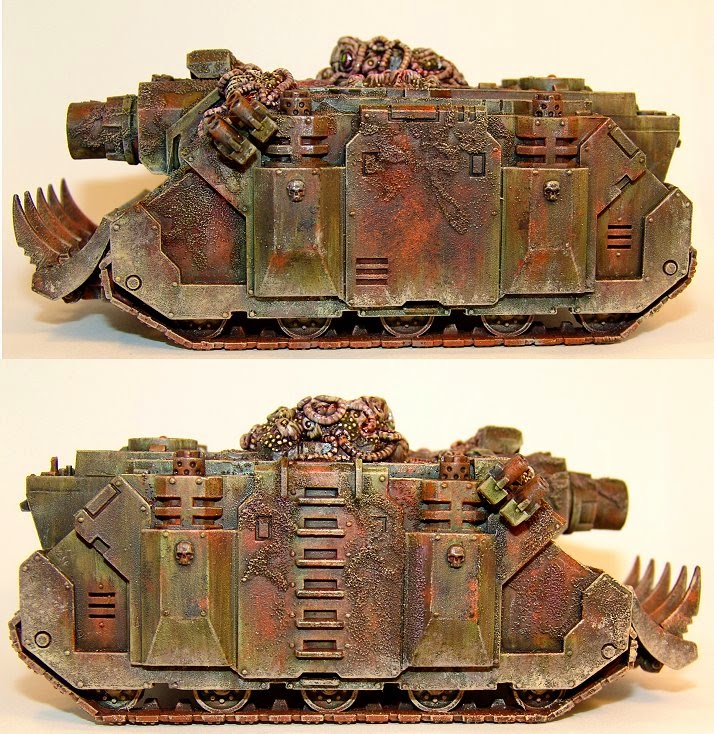 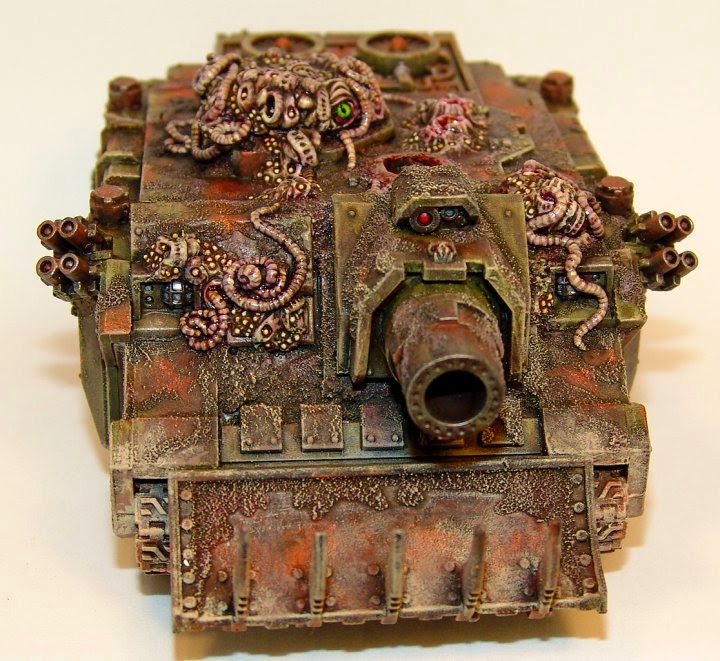 A shot of all the gribbly parts. Of course, you can't see the eye when the Havoc launcher is on. 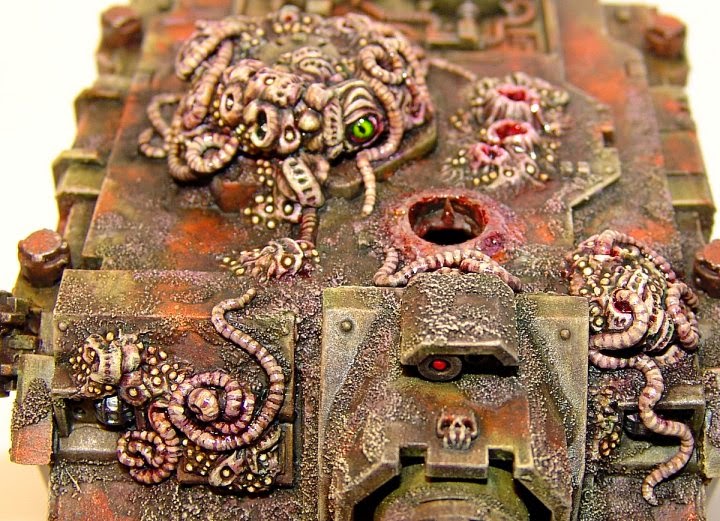 And a shot with the Havoc launcher 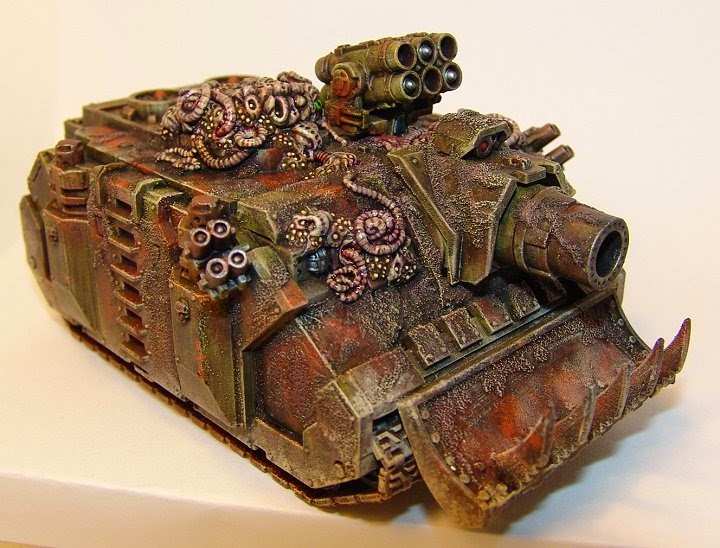 That's it for that project. Hrrrrrmmmmm.... what to do next?

For anyone who might be interested in some non-Warhammer insanity, the beginning of my first comic story arc has been posted at Da Komixshop.

I worked on the Vindicator some more too. Its about one painting session from done.  So, somewhere around Friday or Saturday I'd suspect. ;)
Posted by Rednekkboss at 7:26 PM No comments: