After finishing Not-So-Smilin' Bob's turret, I really needed to work on a figure. So I decided to knock out the Sorcerer. Here's where I had left off.... 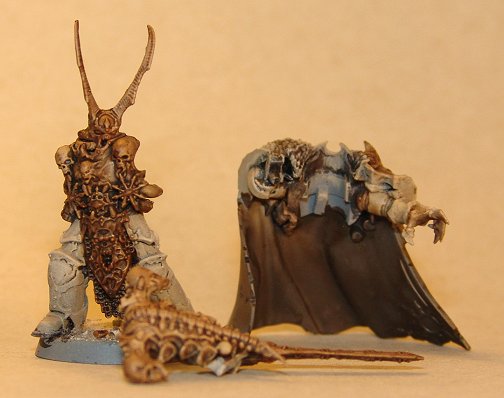 And here's what happened after I stuck in some ear buds and cranked the music. 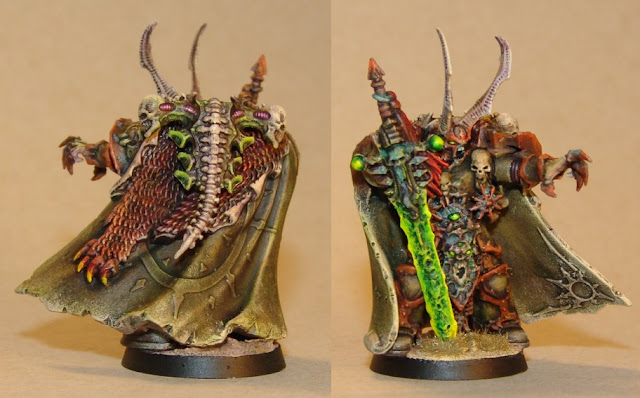 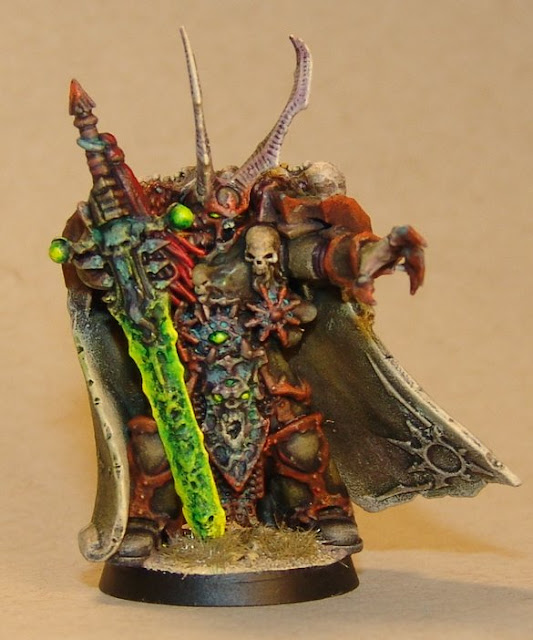 Overall, I'm pretty pleased and it was fun to just knock out a mini in one sitting.

I have to admit to a slight pc gaming addiction. The latest time sink has been an older game - Tropico 4. City building, but you play the part of a Caribbean dictator. I've also been doing some inventory and reorganizing in the hobby room in preparation for some serious house overhauls/reorganizing while my teacher wife is off for the summer.  In the process, I figured out that I have a ridiculous number of miniatures yet to be built.. not to mention all of the sprues I have laying around from WH Fantasy stuff I either got for conversions of for my very brief flirtation with the game probably 8-10 years ago.

With that, I have plenty of minis to make a couple new armies, especially with all the Mechanicus goodness and new Marine codex. SO, I present to you.... El Presidente aka El Chupacabra. 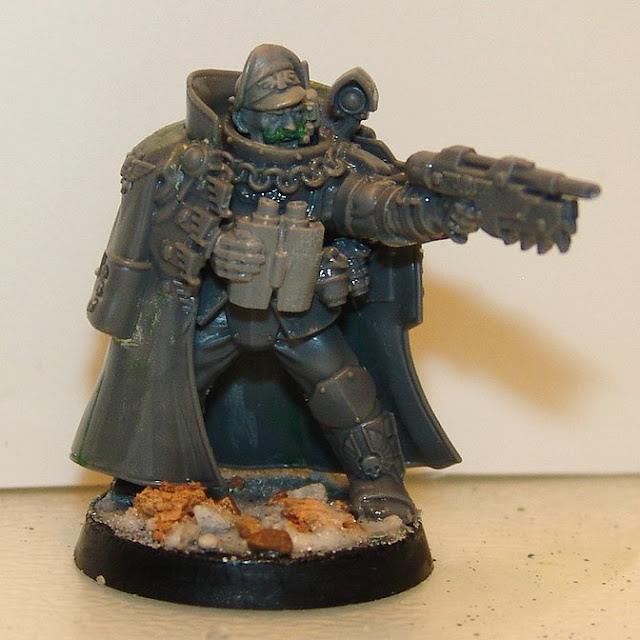 He's going to double as a normal Company commander or Creed, if I feel like using the extra points.  But in normal form he has some wargear that will be represented by something rather creepy on another base. ;)  More on that next time.  Typical of all my loyalist armies, these guys will be a bit tongue-in-cheek and there will be some cheeky narratives to go along with them.  But, don't worry.... I haven't forgot about my traitor guard either.  Their infantry (and finishing up the tanks) will be my next project after the ETL4  stuff is done.  The Dogs of Khorne and the rest of Not-So-Smilin' Bob are next on the painting table.

Ever wonder about the whole DOOooom part of the Templars of DOOoom? Yeah, I know, its a burning question that keeps you awake at night.  Well, I've been working on some sketches over at Da Rednekkz Komixshop so you can see what those crazy Templars are all devoted to.  Also working on some 40k comic craziness with my beloved Templars so that should hit around September or so.

I've had a little time to work on the ETL4 stuff. I should get enough done for some photos for Sunday night or so. Keep a weather eye open.

Cheers Ya'll!
Posted by Rednekkboss at 8:24 AM No comments:

Not-So-Smilin' Bob's turret is Done!  First the "before" picture.

And now, the finished product.....

At this (typically) abysmal painting rate, I'll never get done by August 1st.  So, I'm going to switch gears and give myself 2 weeks to finish the infantry portion, which will leave me 3 weeks to finish Bob's chassis.  Next post should be Terminators and a sorceror. Until then.....

The first progress on the ETL4 challenge miniatures.  I've got Not-So-Smilin' Bob's turret around 80% done.

There is some more washing and detailing to do, but the bulk of the color is laid in.  The Terminators received a wash of black paint. The result is a deep brownish black. Good for starting an old iron look and or a deep red. 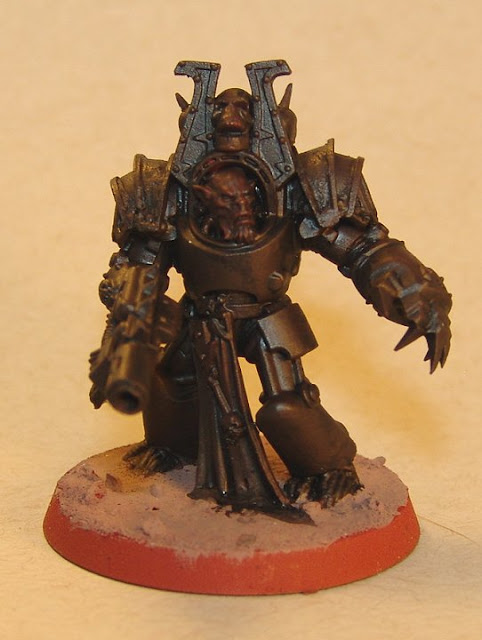 The Sorceror exploded, then got a similar wash , then a drybrush of GW Karak Stone. I'm thinking there is going to be a lot of old bone color on his armor, along with the standard of rust and deep greens for the army. 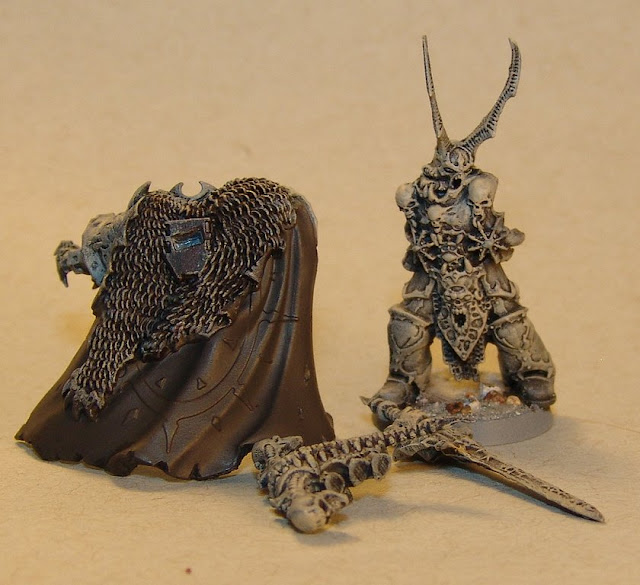 And somewhere along the way this thing, which is not part of the challenge ended up on the workbench. Huh.... I wonder what it will be? 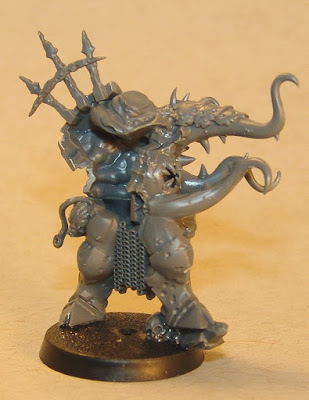 That's it for now, more after the weekend.

I overhauled the photo box/stage/thing I use to shoot my minis. Its not as snazzy as some of the ones I know people use, but it does the job. Basically, its a Hive Tyrant box, one half stood up inside the other. I removed a few of the flaps, taped it together so I can move it around (with Duct Tape, of course) and put some white paper in it to shoot against.  The overhaul was a little more duct tape for stability (everything is better with duct tape, well... almost everything) and a new background of colored paper. 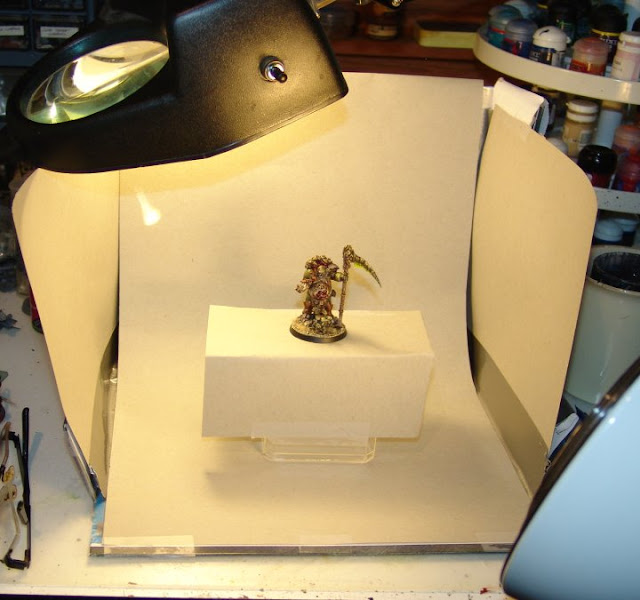 This one has a stand in it, but shooting on the bottom gives a great no line background.  Ever the egomaniac That Rhett Bastid was all to happy to try out the new photo set up. 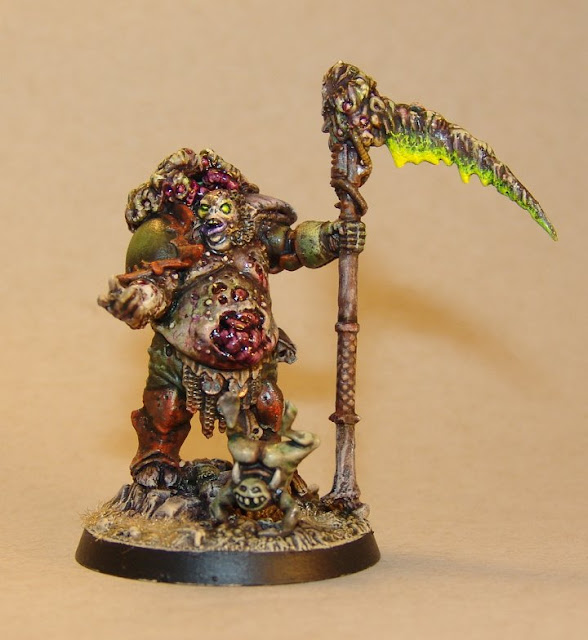 What I'm liking about it is this picture needed ZERO manipulation of contrast or colors than the former set up. And frankly, the colors are spot on to what the mini looks like in person. 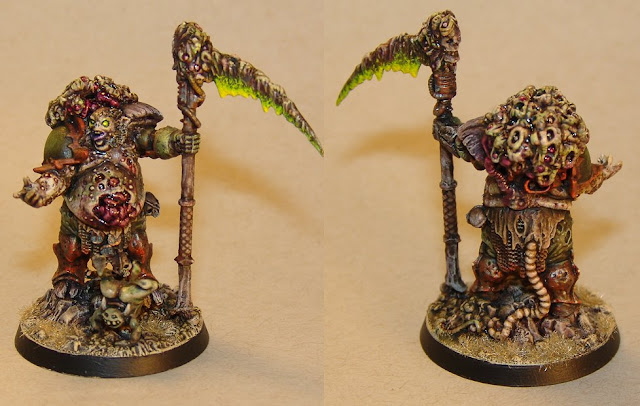 A different angle (and composite of front and back). I'm REEEEEEally liking the way these turned out.

What's on deck? Well, the ETL painting projects will take center stage until they are done, since I only have a couple months to do them. However, I just made a bitz order and I'll likely have some construction project going on. I have a Nurgle Blight knights kit that needs to be 40K- ified. My original thought was plague marines, but I'll be checking the size - they might end up as terminators.

Ive spent most of the last week staying away from creative projects to "clean my head".  I've ran into some setbacks with my comics and frankly felt a bit defeated..... for a moment. So, I'm doing some reformatting and coming at that from a different direction. Still planning on a 40K comic as well, it just might not be until the end of summer.

I'm also contemplating doing limited commission work in the Fall. So... if you like the way I do things, keep an eye out for details on that if you are interested. I say limited, because I've done it as a "job" before and got really burned out, so it'll be limited to certain projects and with terms. But... a few extra bucks always helps.

That's all for now, actual painting work later in the week.