It all began when two members of the Bloody Arm of DOOooom cult took on a wounded Space Marine Captain.  Somehow, they managed to inflict mortal damage, not without suffering the same. As they lay dying together, something stirred in the Warp and took pity on them and gave them new life. Thus Harvey and Brent lived again..... sort of.

He's done. Now for paint. After a couple more piddly things to finish, I'm ready to do some painting again. Just some touch up remains to finish up El Presidente and the first Tropican trooper.  I'll also be priming more Tropicans of the East Point Academy Rifle and Polo team. GO FLYING MANGOS!

One thing I've always wanted to do is a force put together by an Inquisitor from various Space Marine chapters or their remnants.  That's going to be part of the overall Loyalist force, which is the "Crixus Reclamation Force". We'll see more about them in comic from once I get ahead of all the other art work I'm swamped with at the moment. I don't have Inquisition rules (Yeah... I know they are available) so I'm basically going to use Commisar Yarrick. That way I can have him in the Guard army and have allied Space Marines.  So, I've decided to do some rebasing and maybe a little touch up to this Inquisitor conversion I did a while back. 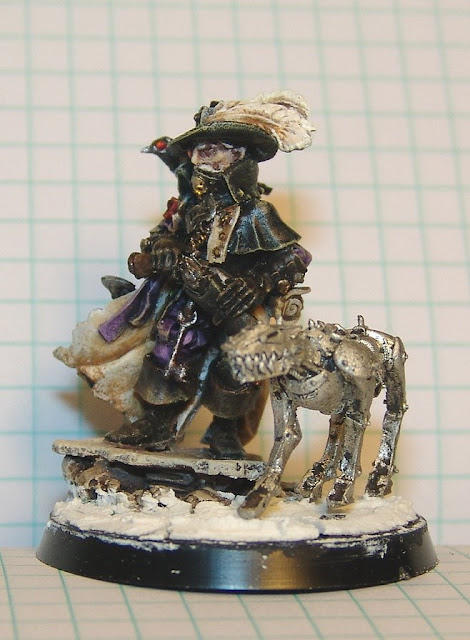 The cyber dog will be his power fist/claw and I'm thinking of some wierd little cherub/servo skull to be the storm bolter.  But, its in progress.

That's all for now.

Posted by Rednekkboss at 8:48 PM 3 comments:

Ever want to see Tree Dragons hunting bees around the Fire Flower trees?  Well, there's a new post at My Artsy Blog if you wonder what it might look like.  Check it out. :)

Hobby stuff coming in the next day or so. I've been doing a lot of clean up and priming, which don't really make for an exciting post. But I hope to finish up Harvey/Brent tomorrow night.

Cheers Ya'll!
Posted by Rednekkboss at 12:23 AM No comments:

From the Workbench: Is that Shingles?

I've been picking away at a few different projects. I'm a building mood, so no new painting at teh moment. Harvey/Brent is coming along nicely. Here's the first bit of sculpting on the ol' boy... 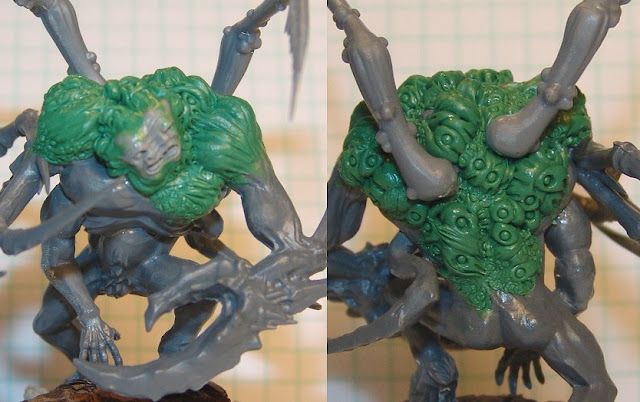 And.. what may be the finished product.  Looks like a bad case of something.... ICK... shingles on steroids?

At this point he's something I don't want to look at for a a day or two before I decide if I need to go after the legs. He is a bit top heavy.  And in need of a topical cream, at the very least.

The details on the Apostles of Quetza Sergeant are done. Everything else will be painted and he's got a brandy new base. 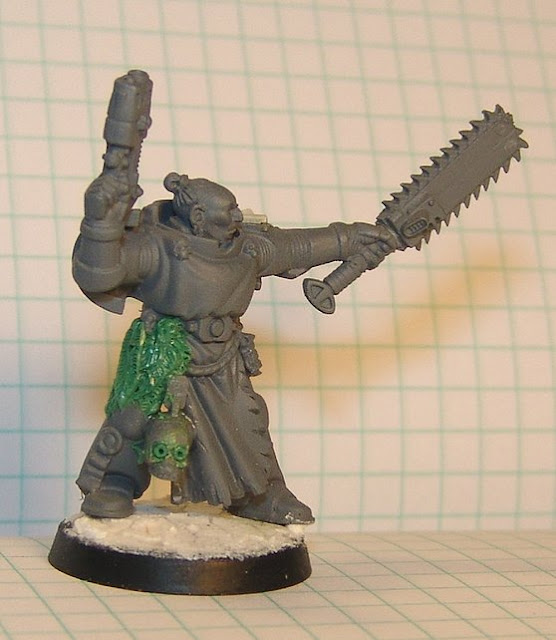 And so did the Librarian, though he still needs an arm and maybe a few more tweeks.. 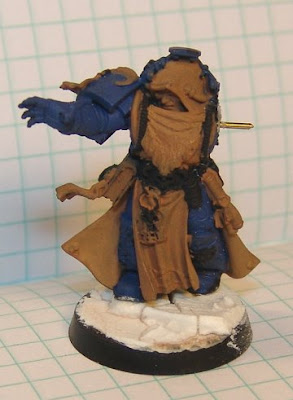 That's all for now. I may just do some painting soon, either way keep an eye open this weekend for the next post.

Busy,busy,busy. But, I did find some time to finish the color sketch of my Apostles of Quetza sergeant.  Its the basic idea for his color scheme, it may change when paint is involved. But basically, Jade Greens and Terracotta. 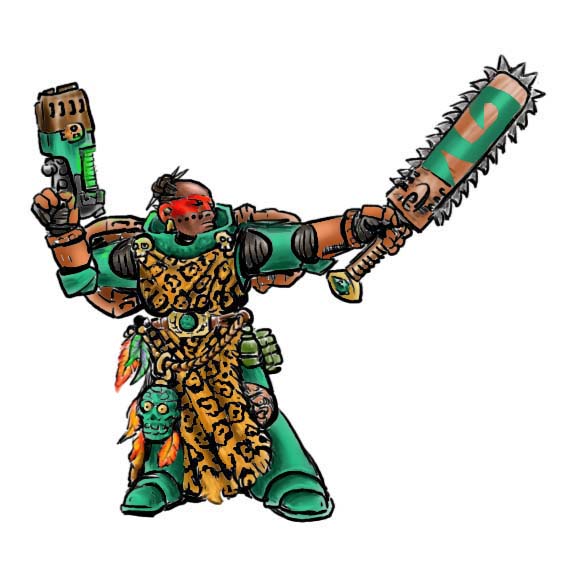 Also been sculpting away an Harvey/Brent the poor, unfortunate Chaos Spawn.  I'll post some pics in a couple days, so I have more in-progress photos.  Keep an eye open.

Cheers Ya'll!
Posted by Rednekkboss at 2:34 AM 4 comments:

A little bit of this and that.

A mixed bag of in-progress stuff.

First off, I've started sculpting on Harvey.... just because..... 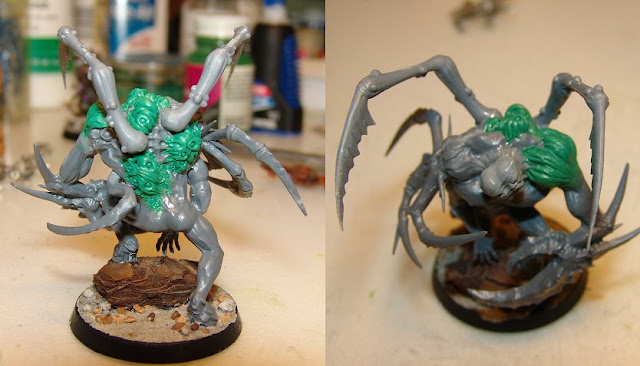 I get the feeling before I'm done, there will be a LOT of green on this guy. And here are the results of my basing with the Crackle Paste.  Worth every penny. I sealed it with a couple coats of slightly thinned Matte Medium to make sure it got into the cracks. You can sand the stuff, but you'll want to give it another quick sealer afterwards. 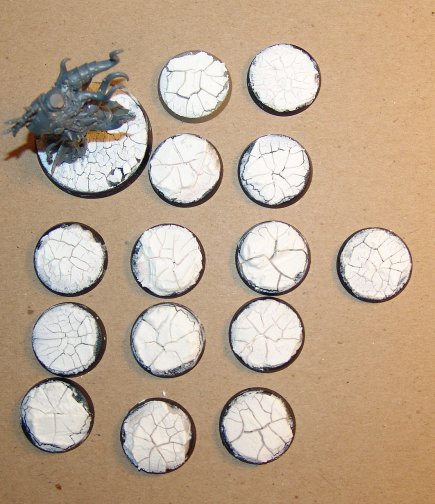 I've begun work on a jade skull for the belt of my Apostles of Quetza sergeant. The image on the right is the relative goal. 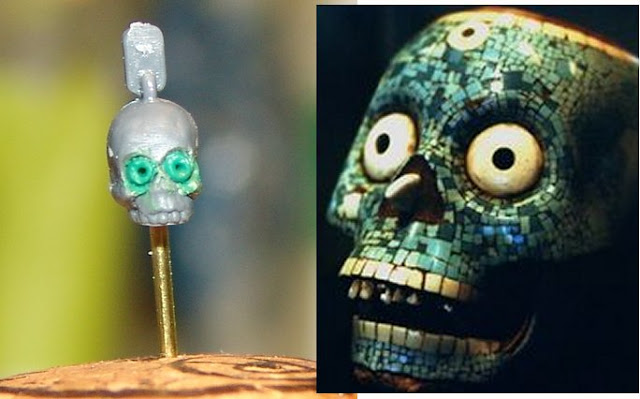 I now have my hot little hands on the new Space Marine codex too. So, don't be suprised if you suddenly see my Raptor marines show up. I need one more tactical squad for the Demi-company formation.

AND.... here's the beginning mock up to my Champion for "The Seven"... my Plague Marines
The head is pinned in and I've got to do some sculpting to get it to mesh good, along with some power cords and other 40k ish stuff. 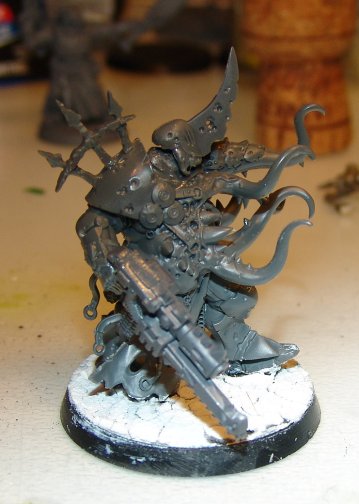 That's it for now,