I call December "Hell Month" because one of my 2 jobs in retail. Its supposed to be the "guaranteed grocery money" job, instead it dominates the month and keeps me from doing my other job and pretty much everything else.  So, I'll apologize in advance for the sporatic posts.

All that said, I've decided to concentrate on the Apostles of Quetza. The plan is to build the minis I need for the overall force.  So, I need to fill out the tactical squad, see what I need for the terminators I have started and go from there.  For the tactical squad, I have a sergeant... so I need 9 guys.  I started with 2 Heavy Weapons options.  Here they are so far. 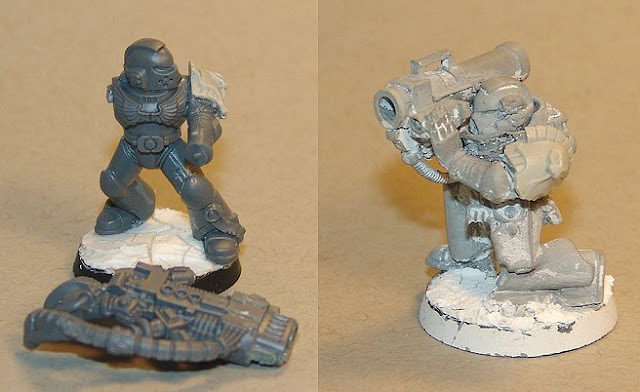 The plasma gunner is from the Dark Vengeance set. The Missile launcher has been around for a while and is one of many marines I have desperate to be repurposed.

The Terminator Squad needed a sergeant, so here's what I have so far.  Hand crafter powersword, in progress. There is still some sculpting to be done. His lower half is from a Space Wolf. I've trimmed up the wolf skulls and will be sculpting them into jaguar skulls. 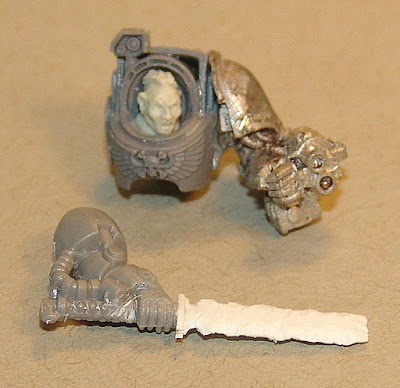 That's it for now. Progress is likely to be slow, but the nice thing about building is I can go into the hobby room for an hour or two and get something actually done, since I won't have several hours to concentrate on painting until January.

Cheers Ya'll!
Posted by Rednekkboss at 5:41 PM No comments: