Well.... I've run out of shoulder plates. So, while I wait to order some more, I'm going to get these chaps squared away and, FINALLY, begin painting some of the Apostles of Quetza.

Not counting the characters and the Terminator squad, I have 2 tactical squads, with special weapon and sgt options. (one 10 man- one 5, that one gets a Razorback) and a 10 man (9 actually with shoulder plates) Jump pack Assault squad, which are basically a refurb of an extra Assault team I made for my Raptors army and didn't need.  Some of the guys still need the odd detail with some green stuff, but basically they are ready to prime.   The next update will involve painting. :)

The rest of the lot with another Sargeant option

Not the greatest picture, thanks to the black primer, but here's the assualt team sans hand weapons.

I also upgraded Sgt Quasimo to an Assault Sargeant. 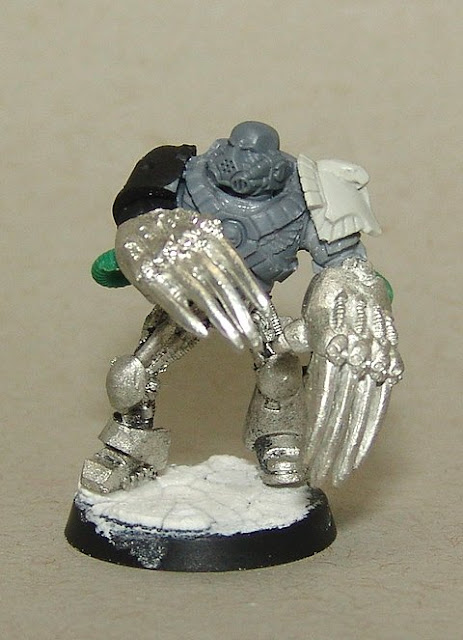 Sorry for the time between posts. Lots of artwork and other work getting in the way of the hobby time of late.  Next time, I'll have some paint slapped on someone.

From the Workbench: Breaking into the reserves.

I can only imagine most folks who have been at this crazy hobby for a while have a bunch of miniatures that are just waiting for a job. Maybe they were part of an old army or project that never quite got finished or were needed.  Enter Assault Squad #8 and friends.  These guys have been sitting in a box waiting for a job ever since I decided my Raptors army was big enough.  I also needed marines to fill out the Demi-Company, without buying any new ones. So, I've been scraping old paint, trimming bits here and there and such to get these guys up to standards.  My desk... as you can see- is a clutter with mundane and boring hobby doings. 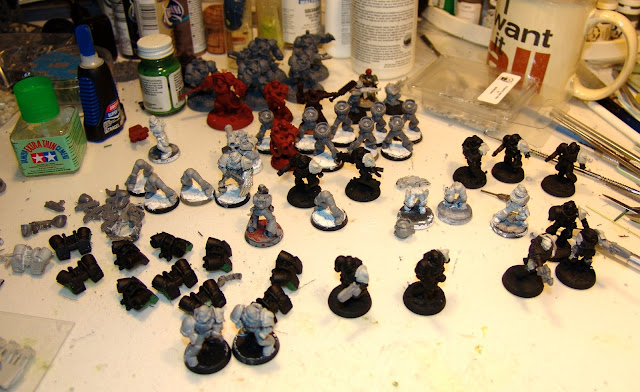 One guy who was cobbed together from various parts was Sergeant Quasimo.  He's had a long, distinguished career.  Maybe a bit too long, but don't let the shuffling gate fool you. 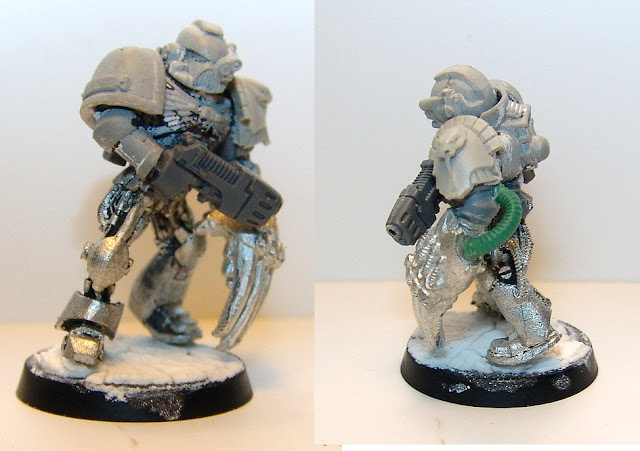 Also did some work on the Assault Sgt.  Like a few others, he'll be an enemy sniper's dream, because he "don' need no stinkin' helmet!" 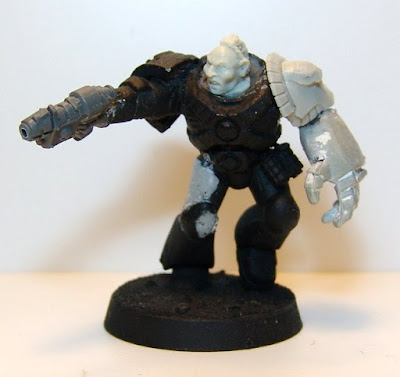 Hoping to get all the mundane stuff done this coming week on these guys. At that point I should have 2 Tactical squads, 1 assault squad, a terminator squad and maybe.... maybe a Devastator squad.   I'll be hammering out a Razorback for a 5-6 man Tactical squad in the near future too.  THEN... it should be on to painting. Although, I did find one wrinkle to this cunning plan..... I'm going to need more resin shoulder plates.

Cheers Ya'll.
Posted by Rednekkboss at 8:35 PM No comments: