From the Workbench: Jade and DOOooombull 2.0

DOOooombull 2.0 has arrived!  Or at least what will become Doombull 2.0. Absolutely beautiful sculpt. Of course, it will be.... modified. 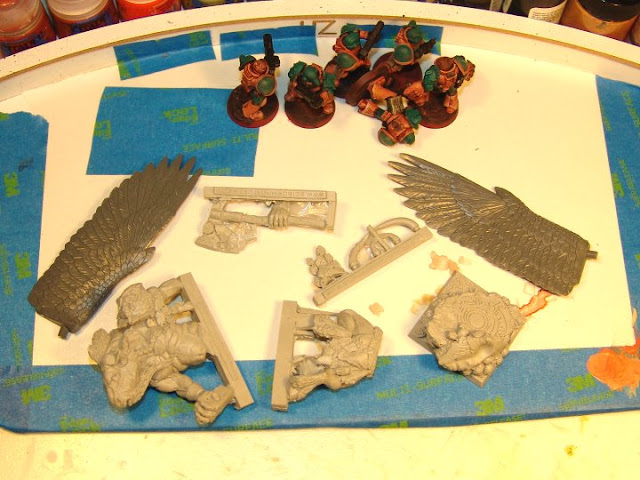 There he is on the painting tray.  The wings are from The Isle of Blood box set I got a few years back when the wife and I briefly flirted with playing fantasy again. But since that didn't bear fruit, I have plenty of skaven for the Dark Gods and some beautiful Vulture wings for the DOOooombull. 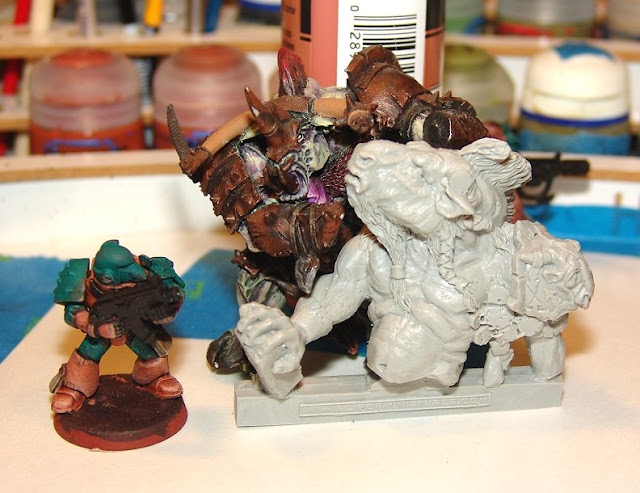 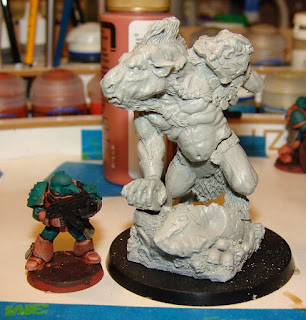 I cleaned the parts up a bit and got it to balance. With those massive wings and a Black Mace, he's going to be pretty ominous.  AND... its almost a superhero landing pose!

On to the loyalist scu....er, Apostles of Quetza.  After several tries and mistries, I have a pretty good idea what doesn't work well. I did remember about half way through that I had some Vallejo Jade Green. So the result of tonight's labor is the basic Jade tone, without details. But it gives you a good idea how the colors play. I also found the mask texture to be WAY too busy, so I'm going with the faux stone texture over all. I might revisit the mask on the characters. 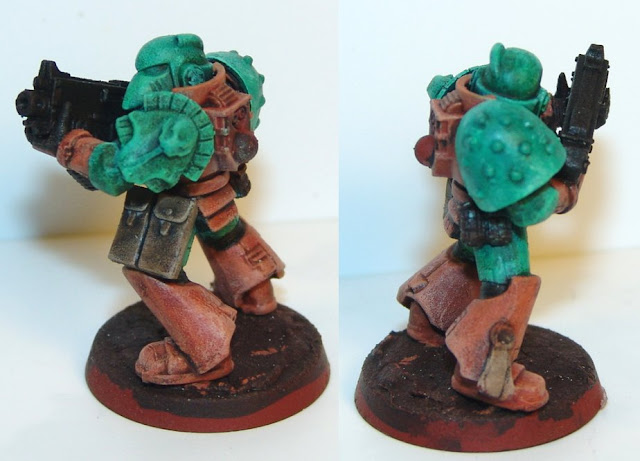 With some detailing and some washes, it should look pretty nice. The shoulder plate may have more color, since the Quetzacoatyl has wings the colors of the rainbow I'm thinking about the flanges as different semi-precious stone or the like.  I should get more time to work on him later this week. Got to get it figured out because the clock is ticking.

Cheers Ya'll!
Posted by Rednekkboss at 10:43 PM No comments:

With the Memorial Day holiday coming up, it seems most of my hobby time will be lost to the glories of gardening. My enthusiasm for gardening can be measured  inversely by how much I sweat an since the 9 months of heat and humidity we here in Central Florida call "summer" has begun, its likely to suck.

The jade on the Apostles is giving me a slight headache.  I could do it as a solid color and it'd look nice, but my desire to push myself has me wanting to do one of the following texture patterns. 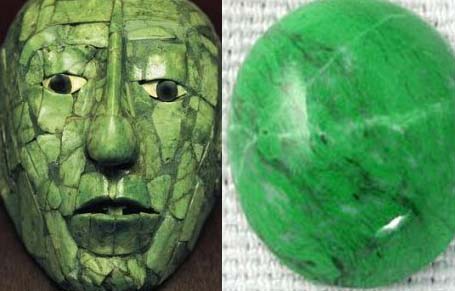 Both would be equally piddly, with lots of tiny brush painting. I honestly like both, but can't decide. Feel free to give you choice in the comments.

Maybe a few days of playing in the dirt will help me figure it out.

Once again, the incomparable Bolter & Chainsword is holding the "E Tenebrae Lux" painting challenge.  Since I always need motivation to get things actually finished, I have thrown my hat into the ring on the side of the Emperor, much to the dismay of more than a few of my fellow Chaos Lords.  Never fear, my friends....  there is much more chaos goodness to come.

I vowed to complete the following by the Ides of August:

I'm doing one squad at a time and the Razorback team is first.  I have finished the Terracotta parts, save fro some final weathering when the rest of the models are finished. Ya'll know I like my Marines gritty.  The team as they stand. 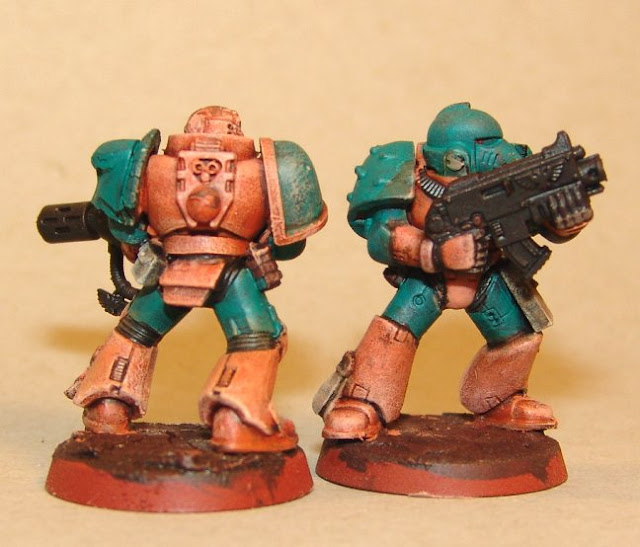 
Posted by Rednekkboss at 9:09 PM No comments:

The DOOoombull has been the Deamon Prince leader of the Templars of DOOoom for many years. Tyranids tried to eat him, marines tried to shoot him, even Orks and Eldar took their shots. Yeah... he died, kinda... but usually he was the guy around at the end of the game or the one my opponent obsessed about killing because he was a serious pain in the ass. Here he is in all of his unfinished painted glory.... 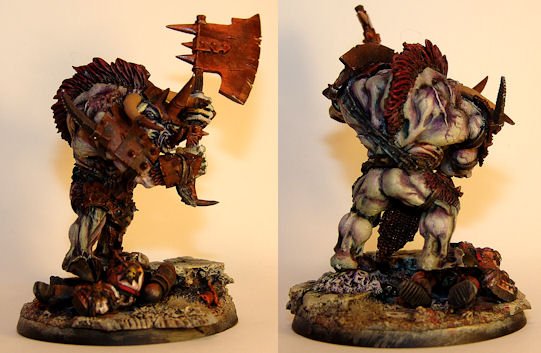 That was taken in 2012. He still looks the same... sorta.  He's been hanging out on the top of one of my shelves fro some time.  At least until yesterday. He's a metal miniature and he decided it was time to leap off of said shelf and see what would happen. This is the kind of tragic thing that happens when former conquering heroes don't get to the tabletop for a long time.

Being metal, he's fixable. If I really wanted to, but honestly he doesn't match up too well to today's army very well, so I'm thinking its time for a DOOooombull 2.0.  With actual wings... not the "See this strip of fire on his back.. yeah it turns into wings when he wants to fly."  So I ordered this guy.... 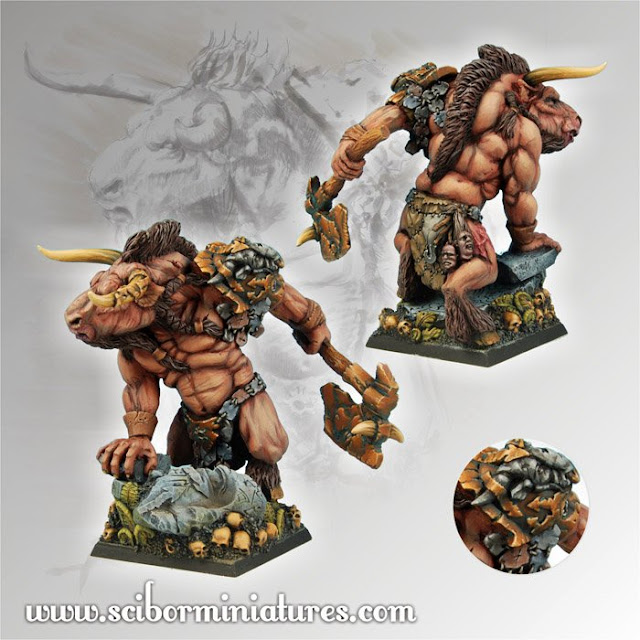 .... to be the basis for DOOooombull 2.0.  I have marines to finish painting as part of the ETL V challenge over at Bolter and Chainsword, so more on them soon (since I'll likely paint tonight and tomorrow). Otherwise, I'll be sweating alot... chipping away at teh outdoor honey-do list and waiting for my minotaur from Poland.

Cheers Ya'll!
Posted by Rednekkboss at 5:25 AM 3 comments:

From the Workbench: Terracotta Warriors... For the EMPEROR!!

And so.... it continues. The Razorback team (plus optional Special Weapons guy...whose name is Steve) are getting their Terracotta on.  I'm usually horrible at step by step pics, but did OK this time.  I started with a Terracotta craft paint. GW Skrag Brown is close, but not quite orange enough and a smidge of a tone darker.  But close. Then I washed the whole model with a mixed Terracotta shade, which is a mixture of GWFuegan Orange, Seraphim Sepia and old Ogryn Skintone whatever-they-called- it. I don't have an exact mix for ya, but I basically eyeballed it. The plan was to make the color scheme to look as much like this pot as possible... 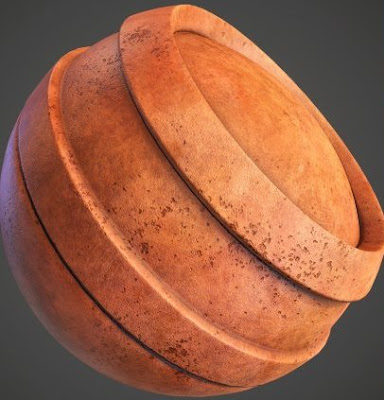 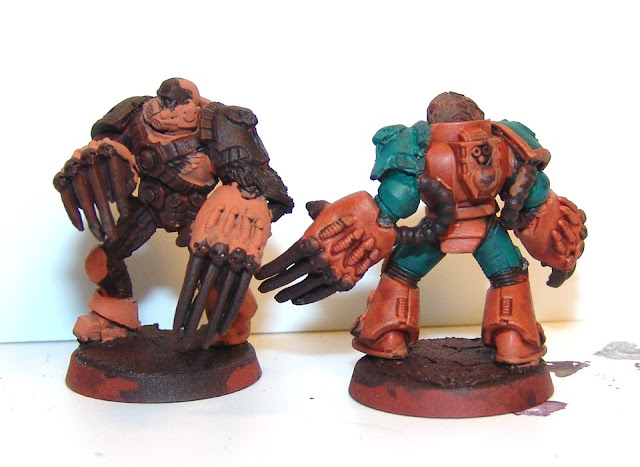 Left is Sgt Quasi in his base coat of Terracotta.  Then the Razorback Sgt with the wash over that.  Basically, the idea was to make all the shaded/darker areas of color and then dry brush on the rest. 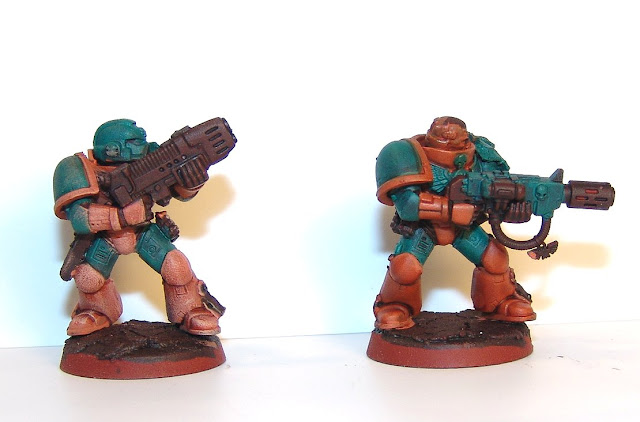 On the left we have Steve, with the finished drybrushing of a couple mixes of the original Crafty Terracotta and GW Screaming Skull (Bleached Bone). I mixed it as I went with a flat brush on my pallette and thumb. The plan.... after I paint the jade, will be to go in on the whole model and pick out details, but aside from weathering and battle damage, that's how the color will be.  It was pretty easy process as far as number of steps go. The highlight/drybrushing is the only really "artsy" part of it, where I just stuck in the earbuds, cranked the music and mixed the tones I needed. Also gave the weapons a coat of thinned down black and there they sit, with all their yet to be finished brethren in the background. To do the Jade the way I want to, should be a maddeningly tedious process that I'm not entirely sure I'm looking forward too, but once I figure it out I'll move ahead painting squad by squad.

Also got this lovely, yet creepy babe in the mail from France!  I replaced some of the vials behind her head (which I broke off with my ham handedness) and replaced it with a Chaos spikey star.  I'll be working on her conversion as I paint the Apostles. All hail the arrival of the Dark Mechanicus! 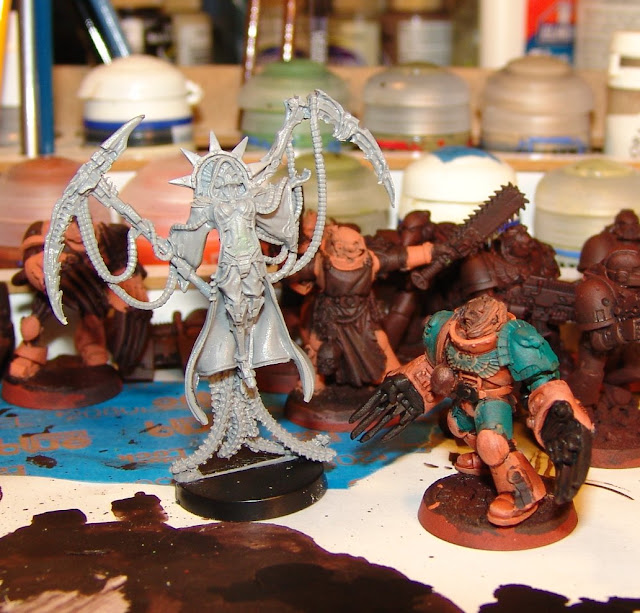 Somewhere along the way in my interweb wonderings.. I think someplace on The ONE AND ONLY BOLTER & CHAINSWORD I ran across what Victoria Lamb has been doing with herself . Good GODS!  What a evil and wicked site that is.  Here I am trying desperately not to spend more money and I see this!  I'm kicking myself for that arms shipment from Poland. And while I have 50 metal AK's, I still could see myself ordering some of these for the regular Tropican troops....

AND they have women...

Resin AK's. Hmmmm...  And one more beautiful chestnut I may not be able to resist....

It may not happen until the fall, but It could happen. Suddenly the look of the Tropican regulars is changing a bit.  For those interested, the Tropicans will be hitting the blog soon.  I have 30+ metal Cadian Kasrkin that will be the East Point Elite Stormtroopers and I'll be basing/priming them soon.  With the humidity on the rise, its priming season now. :)

Cheers ya'll!
Posted by Rednekkboss at 5:04 AM 3 comments: