Games Workshop, why must you tempt me so?

Good GOD.... this is an frikkin beautiful model! 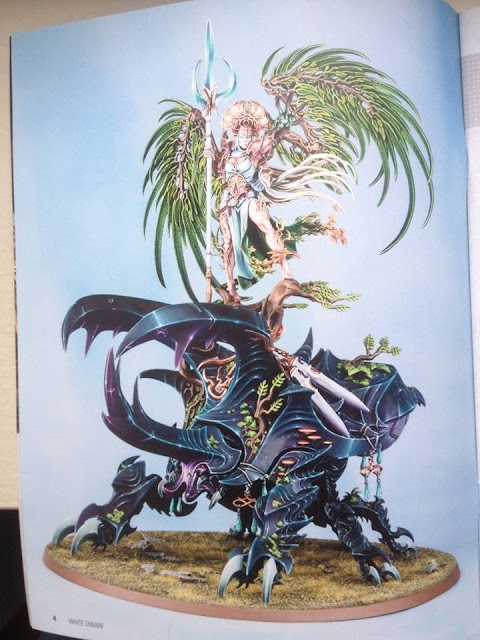 I've always wanted to do some Chaos wood elf/deamon things.... this could put me over the edge.

Apostles Razorback Squad is close to done, but it's late and I have to get up early tomorrow, so no pictures tonight. Should be done in the next day or so and then on to the next squad to try to finish the challenge.  The upside is that I will have a bunch of hobby time next week, so there should be lots of progress.  The bad part is, I'm already wishing it could be done so I could work on something else. :)

All of the marines have their base two colors on them. Now I'm working on getting the Razorback Tactical squad done, hopefully this week.  I'm actually in detail and touch up mode with these guys, though I still have to do a chest eagle and half helm on a couple of them.   Now its all the fiddly bits - purity seals, belt buckles, armor weathering.  But, in the mean time,  here they are -in progress

Not the best picture, but I just snapped it off the bench as a WIP picture, then found myself done for the night. 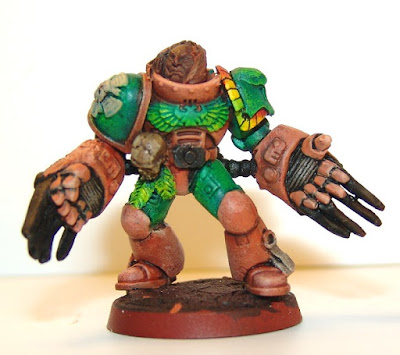 Razor-sarge, also in progress.  The colors are a little "green", but its more because of lighting and not wanting to play with them in the photo editor. Overall, everyone is coming along nicely.  If they are done by the weekend, my next project is a little construction project of 8-9 Aztec-y weapons for the assault team, then on to painting them. Though I may to a "Mass backpack" painting event, just to get them out of the way before I do the other 20 marines I need to finish by the Ides of August.  So far, pretty much on track for actually completing the vow.  If the irritation in my eyes is allergies and not pink eye, I should be good to go. Grandfather Nurgle is mad that I'm spending 2 months painting loyalists. ;)

In other news, I did an inventory of Imperial Guard parts/models,etc and I won't be able to do the whole Tropican force I planned...... with what I have.  I'm going to move ahead with the Stormtroopers (plan to prime then within the week or so) And I'll build the command squad for El Presidente, then look at available funds.  I'm seriously considering ordering a couple squads of Victoria Minis Arcadian Guard as well as 2 of THESE to put on Tarox.  I DO have a Chimera, which will either join my Nurgley Guard as a transport or be mixed with a T-34 for the Tropican army. I haven't decided yet.  Most of this won't likely get going until fall. I also have 2 Valkyries to build. Plenty of time to make decisions and see where funds fall. So much for not spending more money on miniatures.

Cheers Ya'll!
Posted by Rednekkboss at 9:55 PM No comments:

ETL V: A quickie from the Workbench

In non-hobby news, Been a busy and crazy week or so here at Casa d' Rednekk. I accidentally walked into another job while going fishing. Job interviews while you are sweaty, smell like fish and haven't shaven in 4 days are always the best. Hiring process will take a couple weeks and might have been slowed down a bit, since its with the City of Orlando... and things have been a little nuts here in town thanks to a wacko who didn't like gay people and/or Latin music. You might have heard about it in the news, but I have to tell you I haven't seen anything like the way this town has come together since the shootings.  Its really inspirational.  The way the media and politicians have reacted, is the total opposite... shameful, in my opinion. But they can't help it, I'm fairly certain they are aliens or pod people... or evil minions of Cthulu or a genestealer cult.

Back to the hobby. With time a bit limited, I've been doing base color painting.  All of the marines for my ETL challenge have the base terracotta color. I'll do the dark green and black on them next, then I'll batch paint them to get to the last stage before detailing, then detail squad by squad.

I still have to build 1 more Assault Marine and a bunch of hand weapons for the same bunch.  So, the push will likely be to finish the tactical squads first.  Once the ETL V challenge group is done, I have 2 character models, then I'll have to decide how much more I'll expand the Apostles of Quetza force.
I had originally envisioned the Crixus Relief Force to be a mottled group of small units from various Marine chapters as well as the "collection" of Chapter remnants put together by an Inquisitor.  So, time will tell.  I really AM itching to build some Orky stuff too.

Cheers Ya'll!
Posted by Rednekkboss at 2:47 AM 2 comments:

I did some more base color painting on the lads. Since I really wanted to see how the shoulder plate would look, I decided to finish my test marine. And here he is, sans some static grass and leaves on his base. 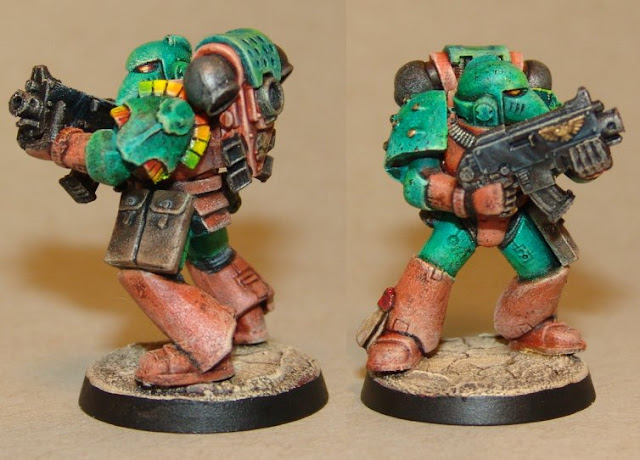 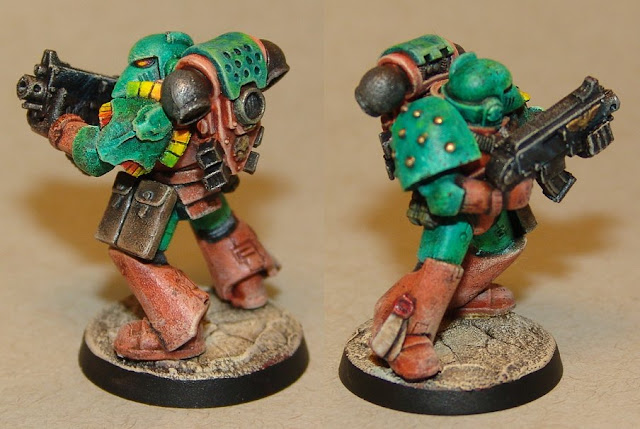 Part of me is toying with the idea of freehanding some jade feather designs on the shoulder plate.... and the other part of me wants to actually finish the ETL on time this year.  But, It might be an addition down the road.  I goofed around with some designs on the terracotta- little Aztec-like glyphs, but it just looked too busy. But I'm pleased with the weathering. I also streamlines the Terracotta AND jade techniques when I did the backpack, so that bodes well for the gang all having the same look.  More to come around the weekend.

Here's a shoulderplate mock up I did in photoshop. Any comments? 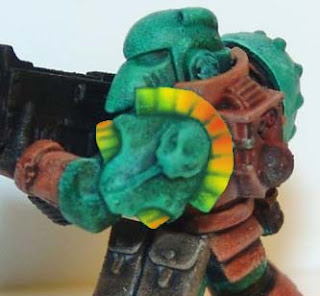 Posted by Rednekkboss at 8:01 PM 3 comments: