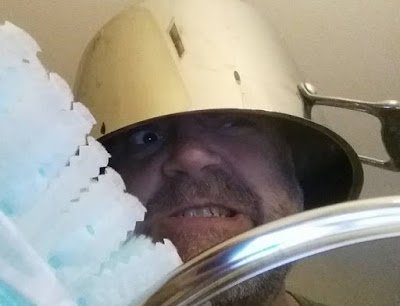 New year and lots going on at Casa D Rednekk. Especially the honey-do list, plus appliances that seem to be dropping like flies.  For those that have followed me for a while you know I've been kind of agonizing over how to proceed with the hobby since I don't play anymore.  After much back and forth, hemming and hawing,etc.etc.  I've come to a final decision.

While I'm giving up on playing, I plan on continuing to build models. HOWEVER.... instead of painting everything and then trying to get rid of it, I'm planning to get rid of some of my stock.  Since you folks have been such a great audience for my shenanigans, I would like to offer the stuff I want to get rid of to you all first.  So, stay tuned for the coming inventory and I'll give you contact info.  The overall plan will be to get a little cash and buy a couple models I just want to paint

SO... what about the armies?  Well, I'm going to look at what I've got, look at the current books, plug in what I've got and if I need to paint a few models to make a formation, I will... otherwise, I'm getting rid of stuff.

The tenative plan (which can always change) for this year and forward is as follows:

Rednekks: Finish the plane conversions and go from there. I've got an absolute ton of Ork stuff. If there is one army I'm likely to keep (at least until stuff is built and painted) its this one.

The Templars of DOOooom: I have WAY too much Chaos stuff.  I'll be looking at the aftermarket stuff I bought and kind of plan from there. Most of the Templars infantry is base painted, so I'll likely try to finish a formation or two up.  I'm bound to have a ton of Chaos stuff left over (since someone gave me 100 Khorne Berserkers ... for free) so, I'll likely have that available for purchase/trade  or for free. I include my traitor guard in there, but that will depend on the inventory too.

Raptors:  Anything that needs some paint will get it, then it will be up for sale/trade.

Space Marine stuff: There is one army I still want to build. Its a modern incarnation of my very first army The Dire Wolves.  Its going to be conversion/sculpting heavy and its likely to be the long range on going project. Other marine and Imperial stuff will definitely be ready to go.

Bitz,bitz, bitz! : I've got a ridiculous amount of bits from across the range and other stuff, so once I get an inventory done, there will be some bags for those that need them.

Artwork is going to be a major focus from here on out. I have another blog for just that, but I've decided to delete it and just go with this one, so there will be some art and comics about warhammer and D&D like fantasy as well.

Now, I have to put up or shut up. My work schedule has finally stabilized a bit and hopefully, for good, there should be some hobby progress in the next couple days. I've got some Ork pilots to finish. :) I'm glad to be back and looking forward to a hobby and art filled year.