August Arena Challenge: 1 down, 1 to go.

First challenge done and actually on time.  Still don't have a name for this guy, but I might get a game or two in soon, so maybe I'll come up with one. 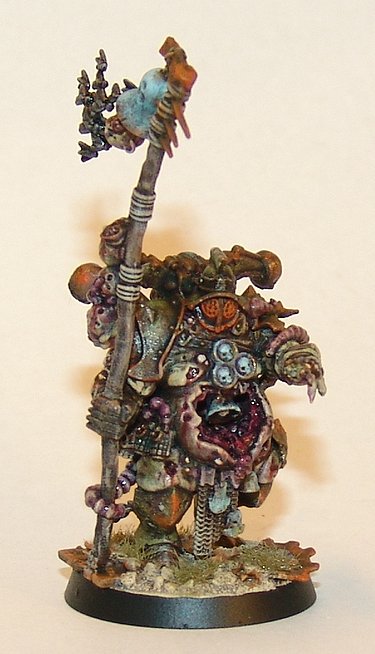 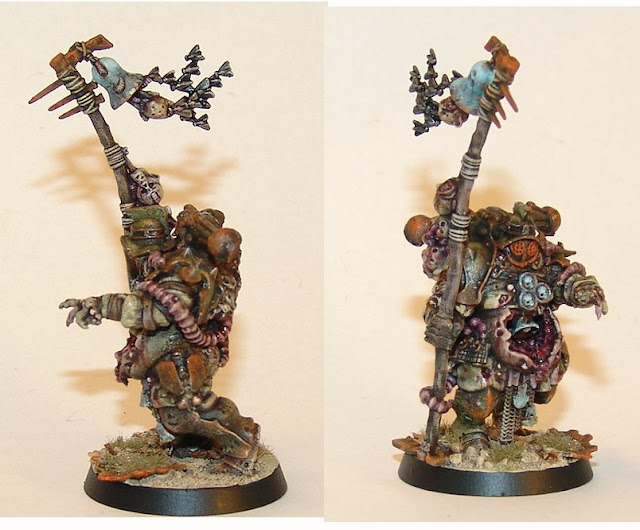 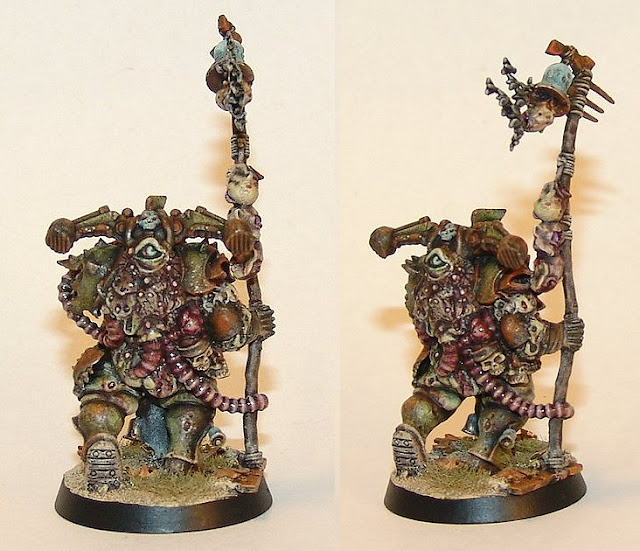 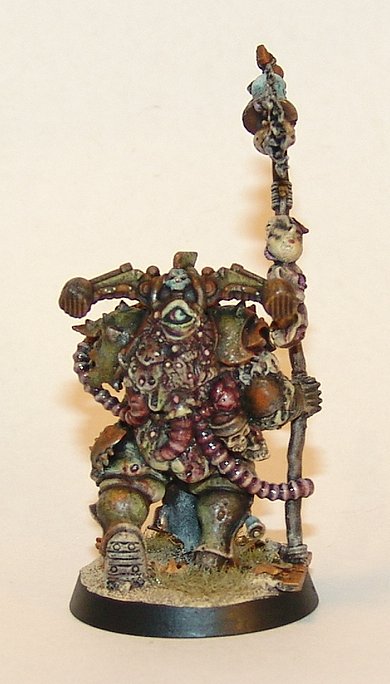 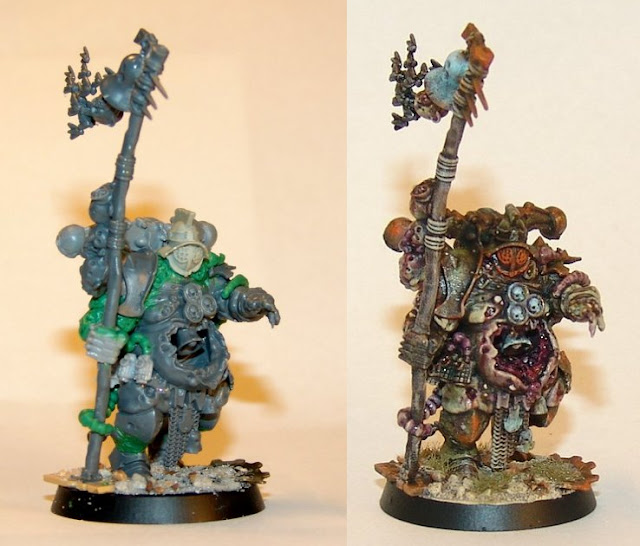 Next up?   A deviation from the Nurgly to the sublime.  My version of Lucius the Eternal.

Just a quick one.  I did an 11th hour addition to the back while I was painting last night.  Its always good to be able to see behind you. 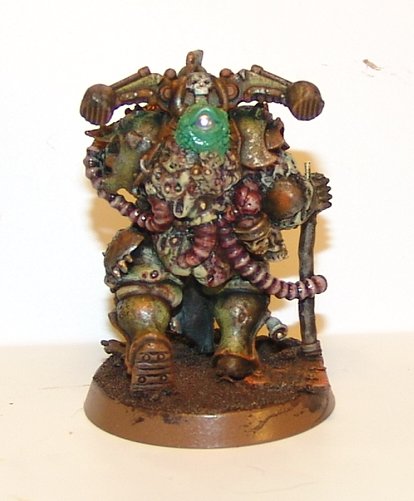 Still editing photos for a little sculpting tutorial of sorts.  My wife did a great job taking the photos...all 64 of them. So now comes the task of going through the ones that show progress and tell the story of a lump of greenstuff gone gribbly.  But, here's the tools of the trade... 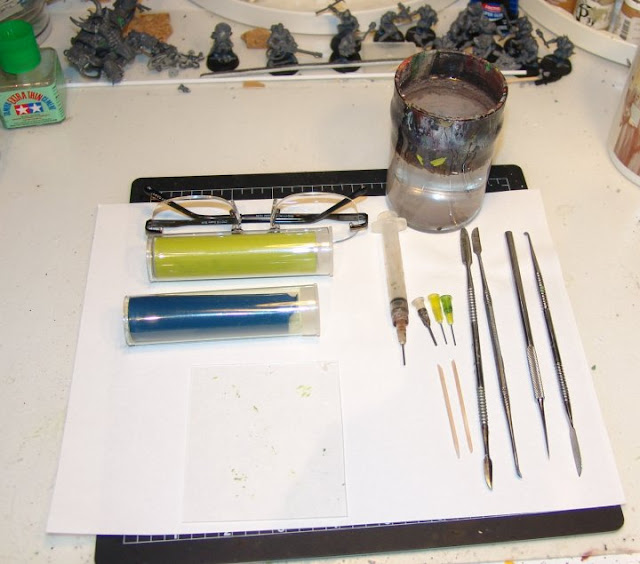 More on that next time, PLUS the finished plaguecaster.  About 2 more hours of painting left, which will happen tomorrow night after work.

Last night's painting session was fruitful. It was extended because my dog popped a stitch and I was up a few extra hours.

The skin is mostly done.  Some more detailing and a highlight or two to be done, but for the most part the colors are layed in. The stomach and contents are still in progress, but coming along nicely. I think the next step will be blocking in the armor and non-skin bits, then see what areas i need to highlight and such.

On a side note, I've been skulking around Facebook lately checking out some of the 40k pages.  The commentary I could write on not just the social media aspect of the hobby, but the hobby itself could go on for pages.  But just like everyone else, its just an opinion.... and I do my best not to bog down the blog with my opinions on such things.

Maybe I'm just an old dinosaur, but one thing I'm continually struck by is how some communities can come down on people for painting their models the way they want to/making up their own warband/chapter/etc. Unless I've missed something, I thought that is what the hobby is all about. Its a big fictional universe out there, folks. Enjoy your hobby, paint how you want to paint, convert how you want to convert.

On the other hand, I have to say Bolter & Chainsword is my favorite community so far. Constructive criticism and good folks.

SO... the empty gut cavity was bugging me.  A bit too empty and too clean.  I've had my hands in many a body cavity (I grew up hunting), so it needed some love.

I'll let that harden overnight and prime it tomorrow.  Then, on to painting. I'm enjoying the challenge... and have another one for August, but I have to admit I'm seriously jonesing to get at my Dark Imperium minis and to convert a bunch of poxwalkers. :)

Cheers Ya'll!
Posted by Rednekkboss at 6:14 PM No comments:

The build on the Plaguecaster is DONE! 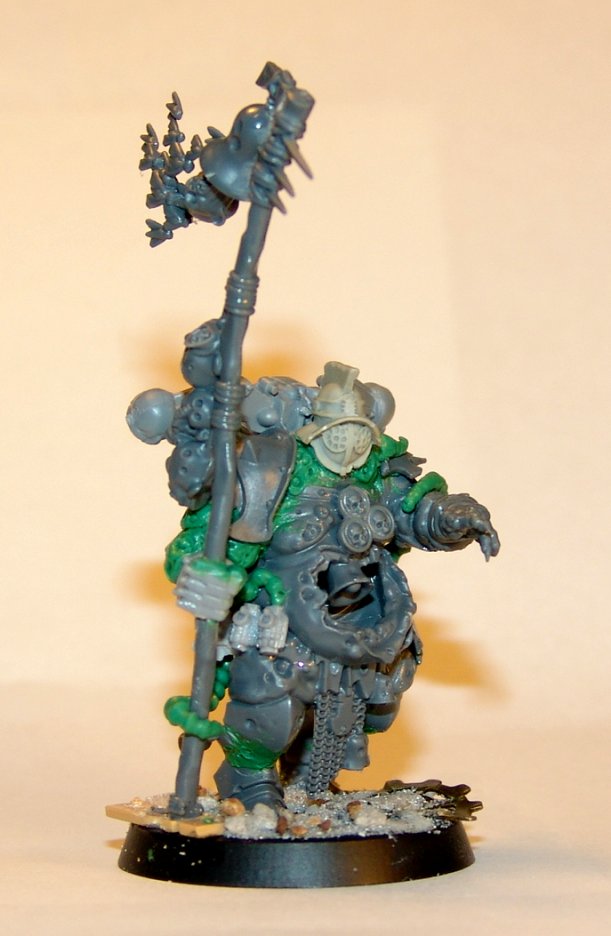 And ....because servants of Nurgle are not afraid to go into battle with their ass hanging out. 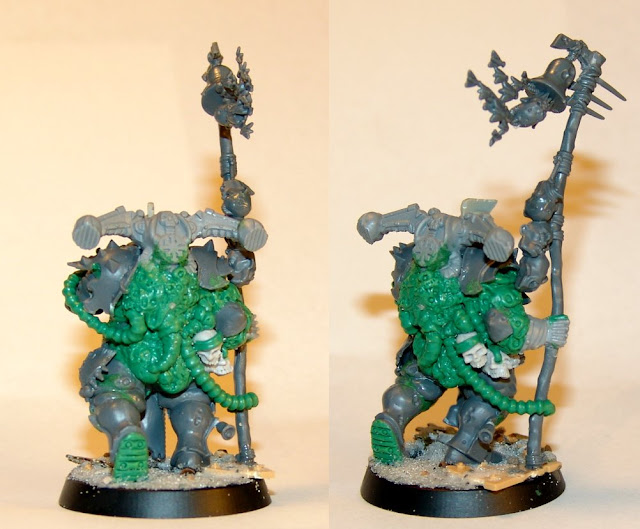 He'll get primed tomorrow and I feel good about the time frame to get him painted, since my work schedule is back to normal.  OH!  and look at the goodies I found at Micheal's! 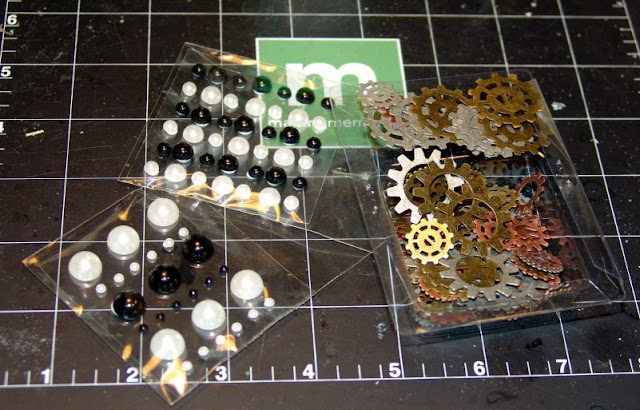 Half rounds of various sizes for eyeballs and 96 different gear like things for basing and lord knows what else. Wait until the Ork meks see them!  My wife also asked if I could build an old (OLD) model she had, because she'd like to try her hand at painting again.  She used to play Warhammer 40k (Eldar) and was a darned good painter, but she hasn't touched a miniature since she went for her Master's @10 years ago.  Luckily for her, I've also learned a LOT about building minis in that near decade. 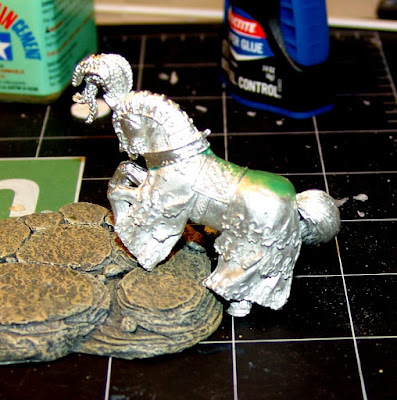 SO....I'll keep you updated on the old Green Knight model.

LOTs and lots of artwork in the pipe, but the summer "honey-do" list and events at my outside job has made it pretty busy of late. Its almost back to "normal", so there will be art going on as well as a big push on minis and hopefully a battle report or two!

The Plaguecaster is taking shape.  The initial round of sculpting is done, much more to come.  Like the Warpsmith, there will be tentacles. 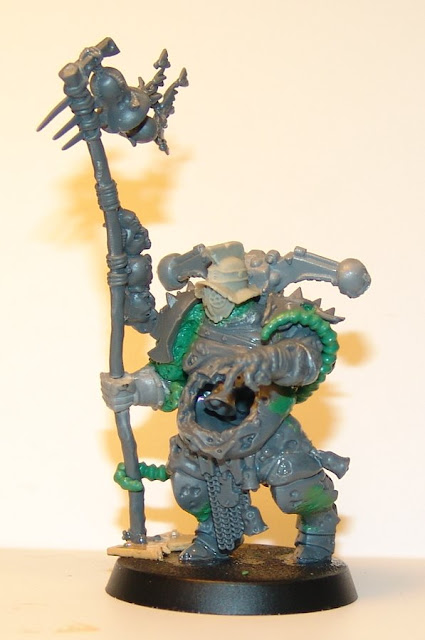 I've got the whirly gigs done , but after my first skirmish of 8th edition I really need a plaguecaster... and they can't have jump packs, SO.... here's the bare bones of the new guy. 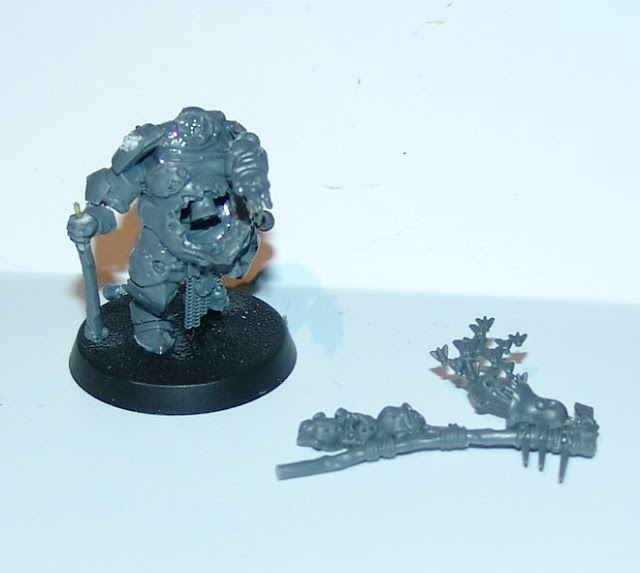 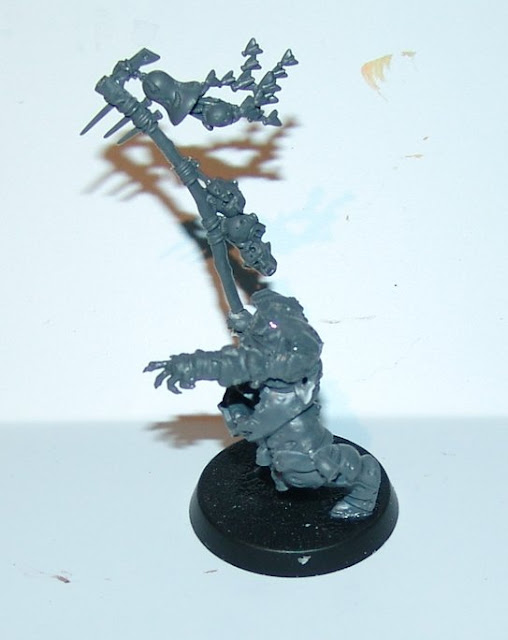 He's cobbed together with parts from the Maggoth kit and Putrid Blightkings, so far.  I'll add some 40k bits , a backpack that is likely to be part of his mutations.  Bunch of greenstuff coming, plus I have to decide on a head. I'm up against my deadline for construction (and a really busy week at work ahead) So I'm giving myself 7 days to finish sculpting and construction so I have time to paint before the end of July.

Posted by Rednekkboss at 3:07 PM 2 comments: 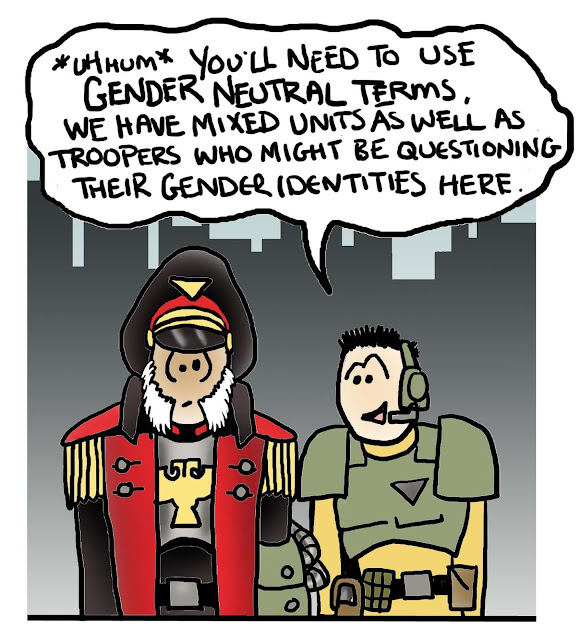 Even in the grimdark of the 41st Millenium, you can't escape political correctness.  ("Warzone:Stixus" coming soon to The Wyrdwood)
Posted by Rednekkboss at 7:04 PM 3 comments:

Because my track record of actually completing challenges at Bolter & Chainsword is abysmal, I have entered a 2 part, 2 month challenge. The first part is a character model and a challenge against a cheeky Brit named Sagentus.  In all seriousness, B&C is a wonderful community if you haven't checked it out and hobby challenges like this are a great way to encourage creativity, comradery and a great deal of fun.

I'm not sure if I've ever had a marine army, loyal or otherwise, that didn't have a psyker with jump pack.  So, I figured this was a good opportunity.  My initial plan was to make a guy with some sort of wings, who was propelled largely by flatulence. As humorous as that sounds - in a Larry the Cable Guy sort of way- its kind of hard to translate into a model.  I'll likely revisit the idea. The second option, and the one I'm going with is...space marine meets Blight Drone

One of my PC game addictions is Diablo 3. There are these bloated floating spellcaster guys with a chaos star like rack on their back (my search-fu failed me for finding a picture) that I've been wanting to loot for a while. So I'm picturing a gross, bloated slob with whitered legs, kept aloft by 2-3 of those blight drone kind of engines.  So, the big hurdle.... the whirly gigs. 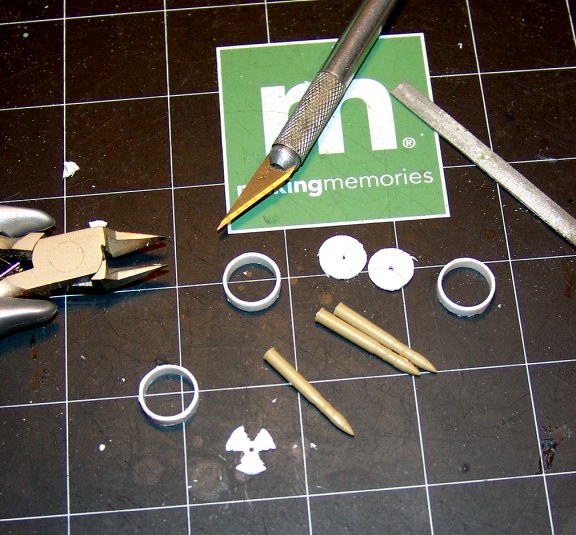 I guess there are several ways to tackle the problem, but I went with a styrene base. There will likely be some sculpting and detailing added, but first I set my ork meks to work on the engines. 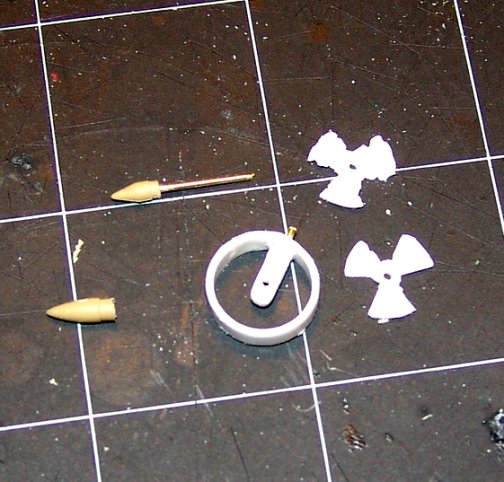 An hour or so of backwoods engineering and no small amount of filing came up with this mess.  Points from 1/35 scale tank shells, a ring with a center spar and two props.  It fit together with a little coaxing and cursing. I feel pretty good because I only dropped it on the floor once. But with a little greenstuff after it dries over night, should get it looking sufficiently Nurgly. (Sorry... the photo is a little whited out. Flash... Pics at 3am)

Another one or two to build tomorrow night , then raiding the bitz to start figuring out what the end result might look like.

OH....and Victoria Miniature makes great stuff. While I had hoped I might be done giving them my money for a while, now they are threatening to release these guys. 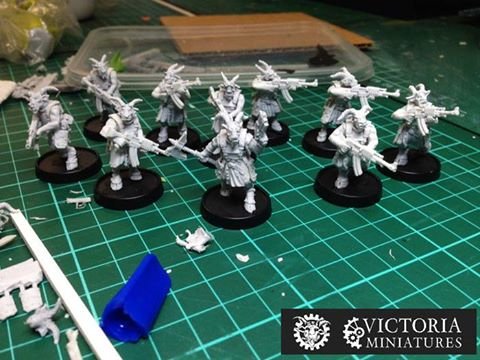 That's all for now.  Cheers ya'll!