The last of the Leman Russ Tanks.  The main gun is magnetized, but its prefered incarnation is with the stubby, nasty Demolisher cannon. 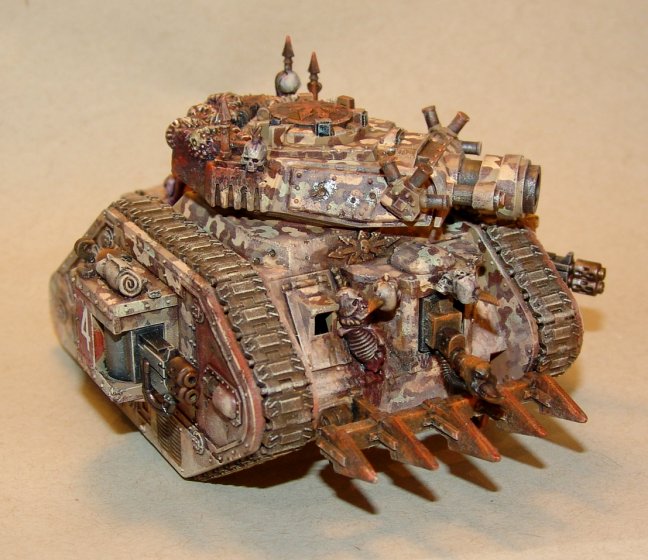 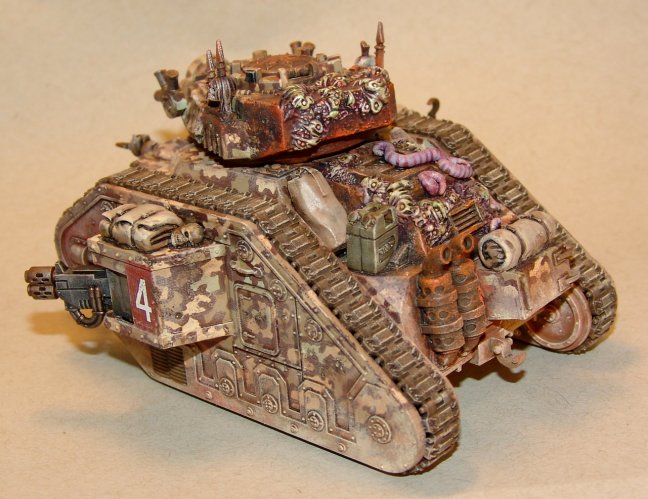 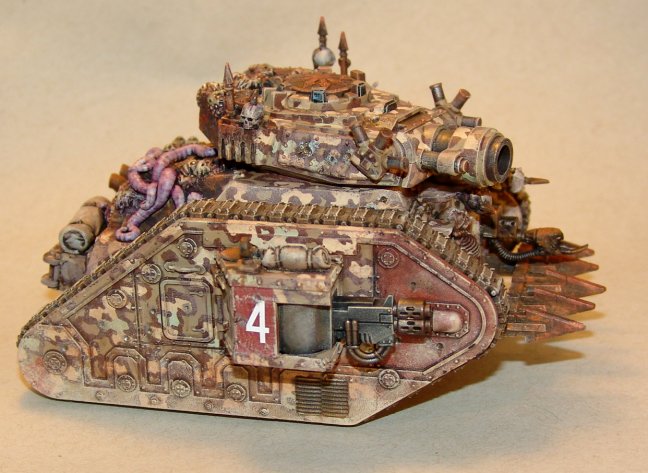 So the painting backlog for the Traitor Guard tanks is caught up.  Still have sentinals and a tone of infantry/cultists to paint and build.  But at the moment, Ms. Charlotte is on my painting station. I should be finishing her up around mid week. Then.... not sure. I may finally jump into the models that came with the boxed set and get some Plague marines built. If for no other reason than to see how they outscale my regular marines. 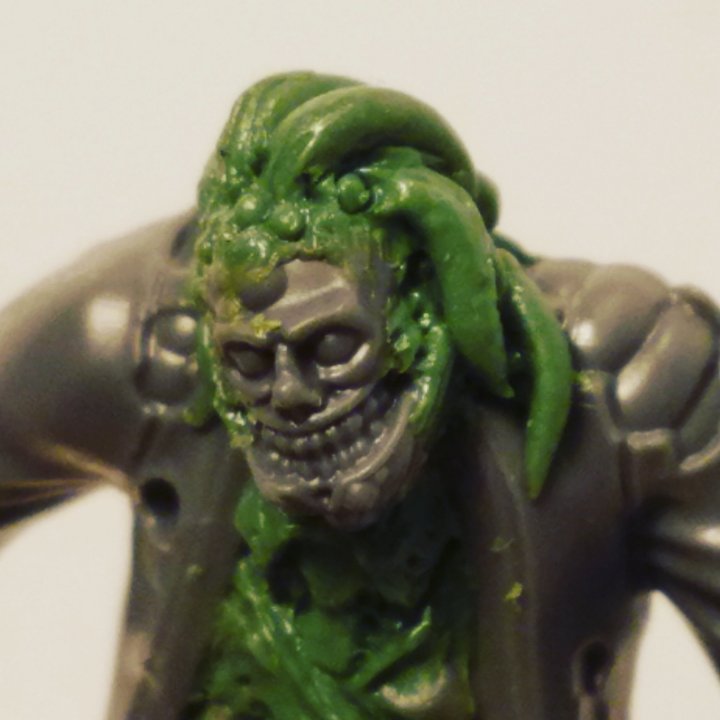 A little someone I've been working on.  More to come.

A Couple Quick Fixes and Something Potentially Disturbing

As long as I was finishing up the Leman Russ troop, I figured I could get the other two tanks I have "modernized" as well.  The first thing was the rust red army stripe. Some masking and a quick spray and that was done. Then some decals and a little upgrade on the weathering.

So here's the Devil Dog. 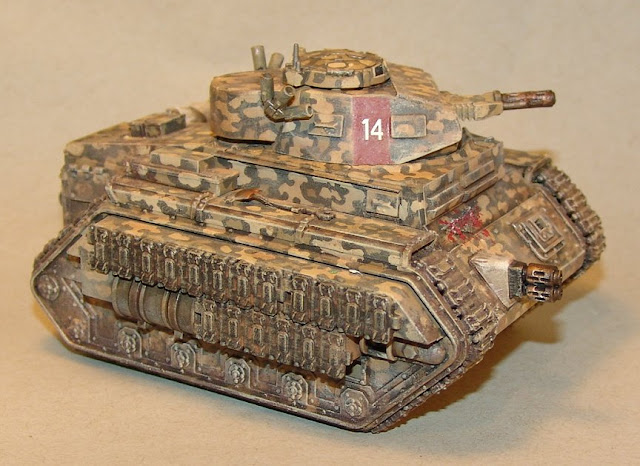 For the Stug- once again a Basilisk- I'd considered adding a barrel, but decided against it. Instead I did some cutting, sanding and repainting so the gun could elevate. Also added a new number decal and buffed up the weathering. I'm pretty happy with its final incarnation. 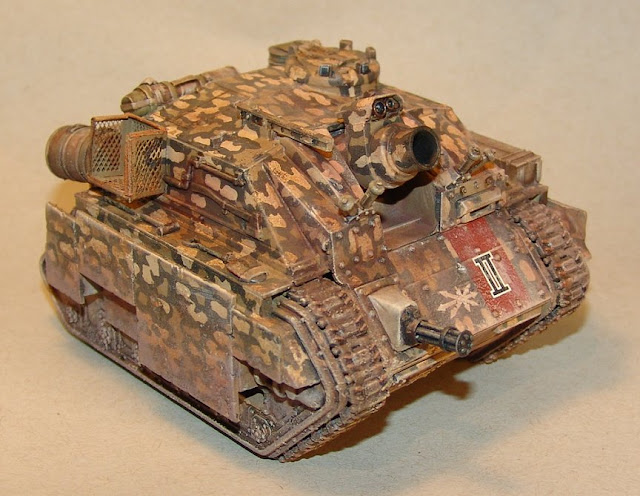 And as a side project I've been trying to figure out how I want my little band of noise Marines to look. Here's the beginning of what I have planned.... 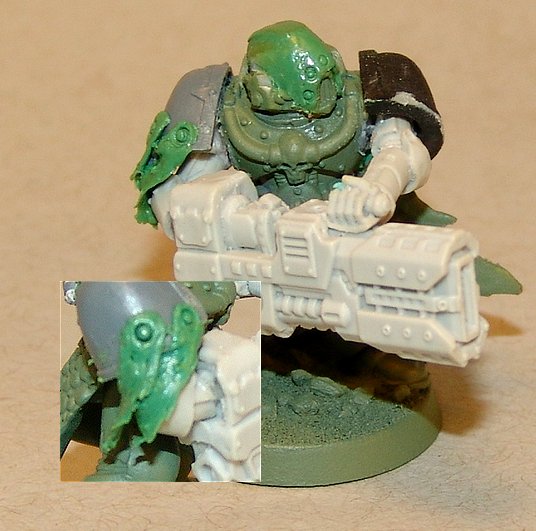 The inset will be flayed flash with nasty things written in blood. And yes, if you search on google images you can find photos of thing made with or covered in tanned human flesh.  You can find almost anything.  Search for "distended stomach" and the like if you need nurgly inspiration... or want to lose your lunch.  Nasty... but helpful.  With this guy I'm kind of making it up as I go along, but I'm thinking about some more flayed flesh as a sort of crest or top knot.

I could go on and on about how I am not a fan of the whole "Slaanesh has to be pink and kinky" feel that is going on these days. But I won't.   This guy will be dark irridecents (think beetle shell or bird feathers) with the flayed/tanned flesh as highlights and probably bronze. Still have a good deal of work to do on him and have to figure out a better backpack. Am I the only one that dislikes Chaos backpacks?

One more Leman Russ on the painting table, which will hopefully be done in the next day or so.  I'm chipping away at the painting backlog. Probably will keep at it for the next couple weeks until I get past an event we're having at my out-of-the-house job, then I'm going to build something. Not sure what, but I'm seriously jonsing to build something.  Death Guard Codex is in the mail along with a couple other goodies and I still have to pick up the Chaos Marine codex.  Since I'm not actually playing its no major thing, aside from my love for books.  Hoping to change that "not playing" thing next month.  That's it for now....

More tanks done.  First, the command tank. If I wanted a tank commander, I'd point to the smiling deamonic hatch. ;) 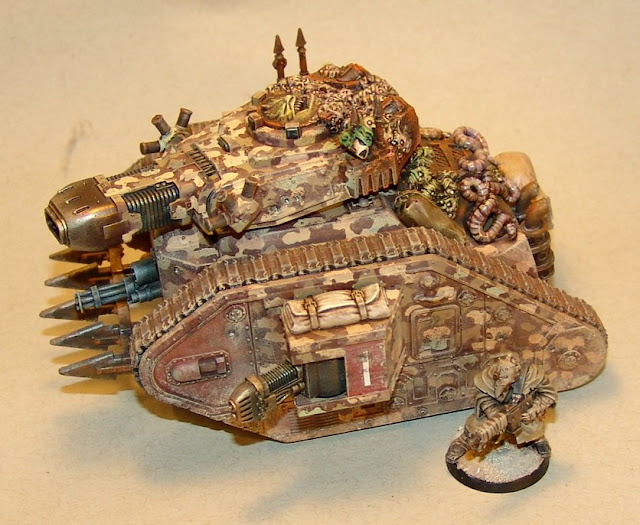 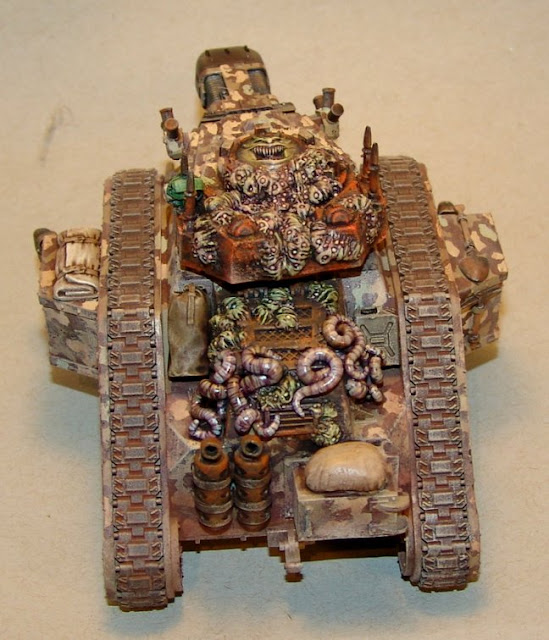 "I think you have something stuck in your engine" 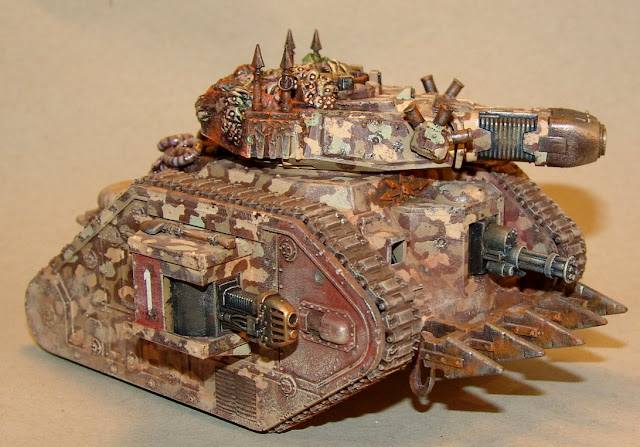 The "Beauty" shot. This one has magnetized sponsons and main armament. The guy below has two OLD plasma sponsons, but a magnetized main gun. I can do 2 Plasma Executioners. 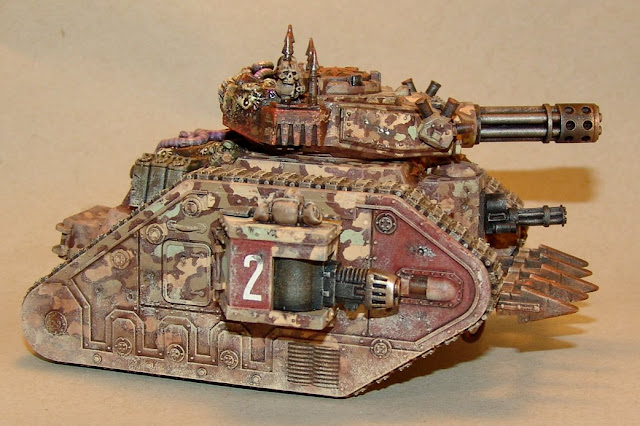 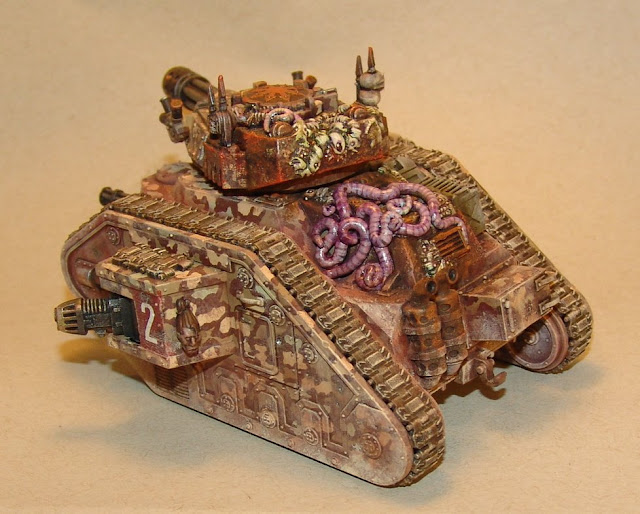 One more to go, then the Leman Russ Company is done.  There may be some tweeking to the other 2 tanks I have as well. At the very least new number decals. But that's it for now.

Posted by Rednekkboss at 7:58 PM 2 comments:

Well, here in the land of swamps, alligators and Mickey Mouse we currently have us a Hurricane. I figured I'd try to sneak in a post before we lose power and such.   Needless to say, prepping for the storm took up a lot of my time this week but I did start chipping away at the painting backlog.  First up, my Leman Russes.  There are 4, which have been "mostly done" for some time, so finishing them off- as well as camoflaging my Raptor tactical Marines - has been what I've been up to.


I magnetized some of the weapons options for 3 of the tanks, so here are the ones that needed finishing up. 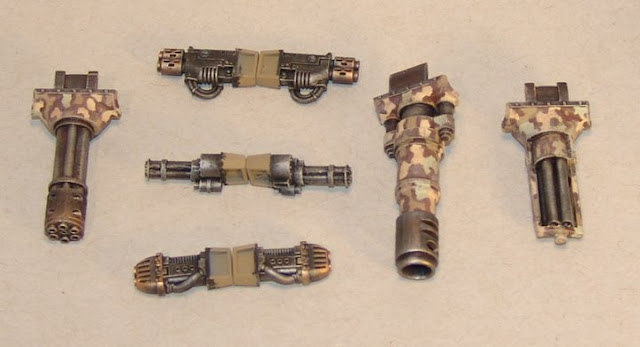 There were a few odds and ends that needed doing on my Standard Russ.  I added a lascannon, finished the sponsons and added some weathering. This one is DONE. 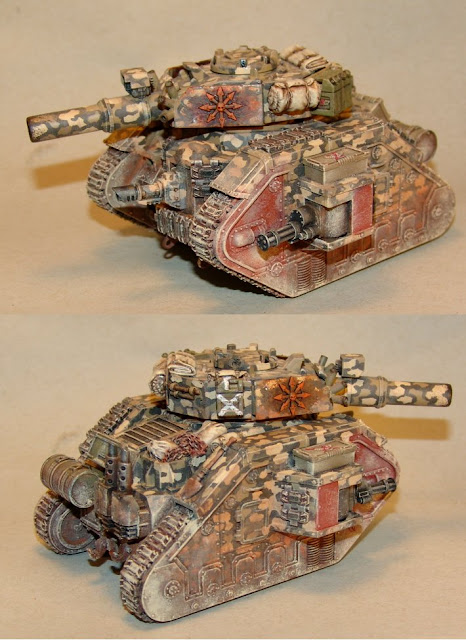 And this is the next hull I'm working on. Started the detailing process, first layer of weathering. Lots still to do - infected engine tentacles and gribblies, stowage and then ding it up. Then 2 more. 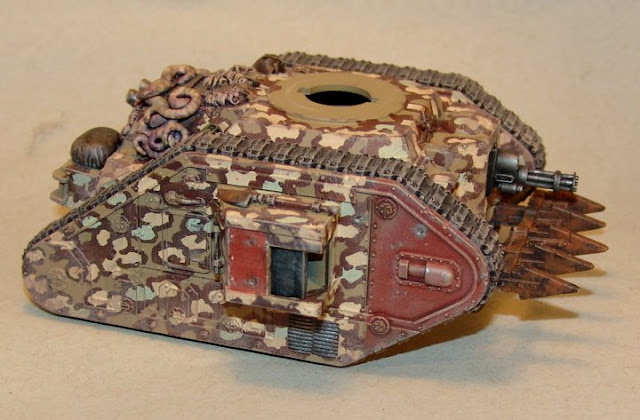 That's all for now.

With the challenges done, I've been working on some of the painting backlog.  Not too much to show.... yet, but lots of details to finish on vehicles that have been @ 90% done for 2-3 years.  In the meantime, I've decided to go ahead with updating my Raptors Space Marine army, which will get some Primarus reinforcements as well as scouts and others. I did some airbrush camo on the vehicles a few years back when I originally painted them and thought about doing it on the marines as well, but decided against it.  Then I washed most of them down a year or so later with varied amounts of Althonian Camoshade, going for the "low-vis" markings.  And now a 3rd upgrade..... 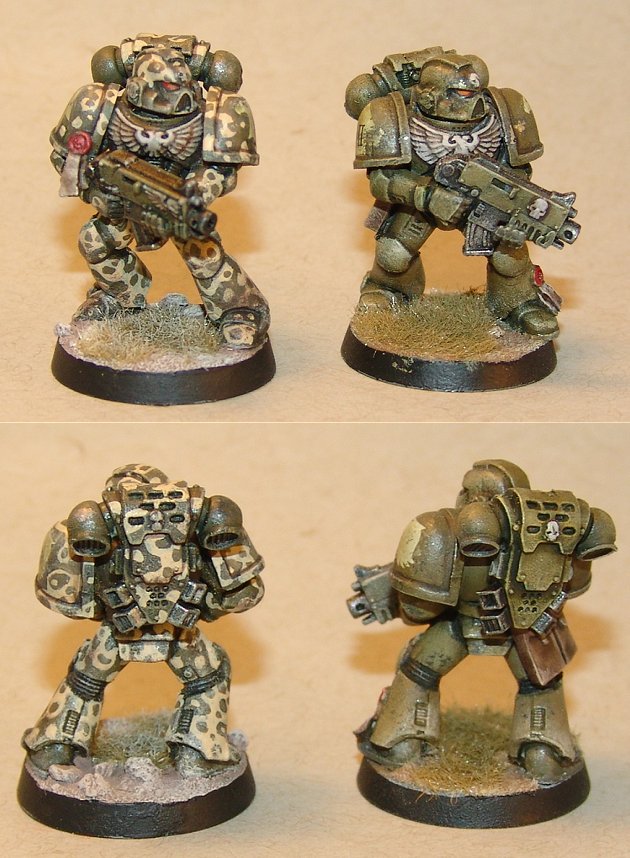 And an all around on the test scheme... 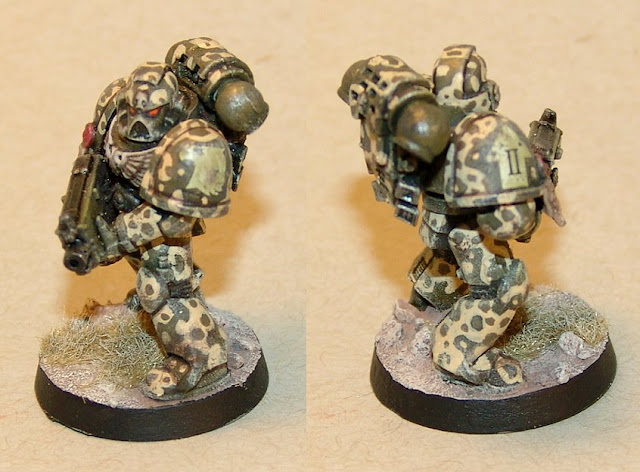 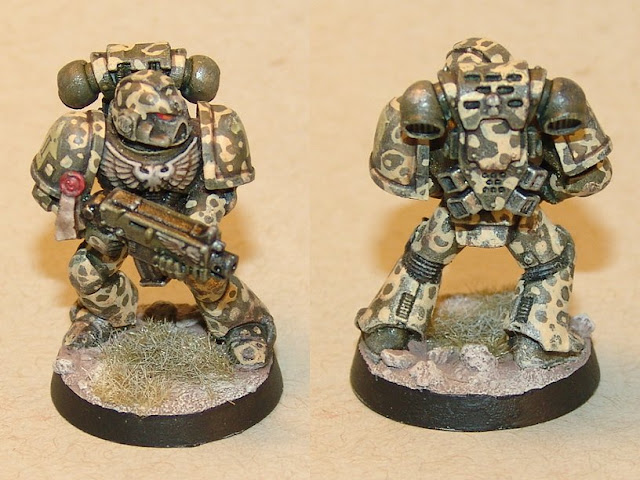 Its a little piddly, but not bad. Simple dark Olive (which is mixed, but mostly Privateer Press Battledress Green) and Vallejo Iraqi Sand (which is very close to the Model Master Iraqi Sand I used on the vehicles many moons ago)  The problem afterwards is reproducing some of the weathering/chipping and the like I have on the originals, but I'll just have to go in with a tiny brush and be picky.

More camoflaged goodness to come. Raptors and tanks on deck.  I finally picked up the Guard index.   Oooooooooo, the evil. :)

Posted by Rednekkboss at 2:58 AM 3 comments: