The Call of Chaos & Friends.

Next up for "The Call of Chaos" challenge, is the Hellbrute.  And he is DONE.... or at least the sculpting and rehab. Ready for primer. 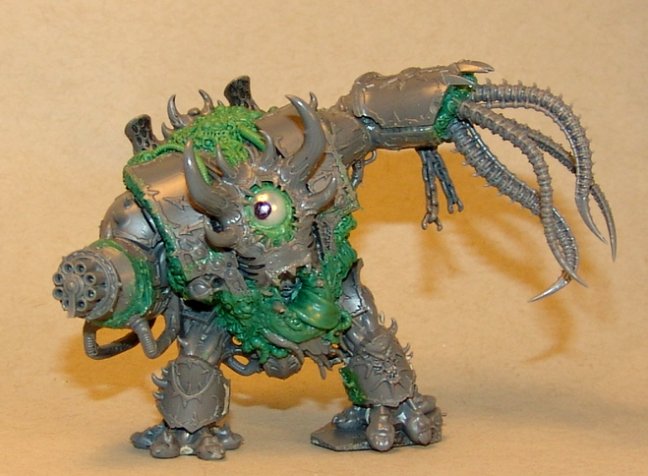 And a couple extras that were finished while waiting for putty to dry.  A relatively simple conversion of the Noxious Blightbringer.  I actually liked this model for the most part. As much as I love nurglings- and I LOVE Nurglings- the one hanging from the horn was a bit much. The other thing that bothered me was the way the plasma gun arm was.... just seemed awkward. So I did some switching around and added a flail bell or bell flail..... and here he is.  Minimal green stuff to cover a couple gaps (and I might add a tentacle or two) but he's done.  Backpack is still not glued on, for painting ease. 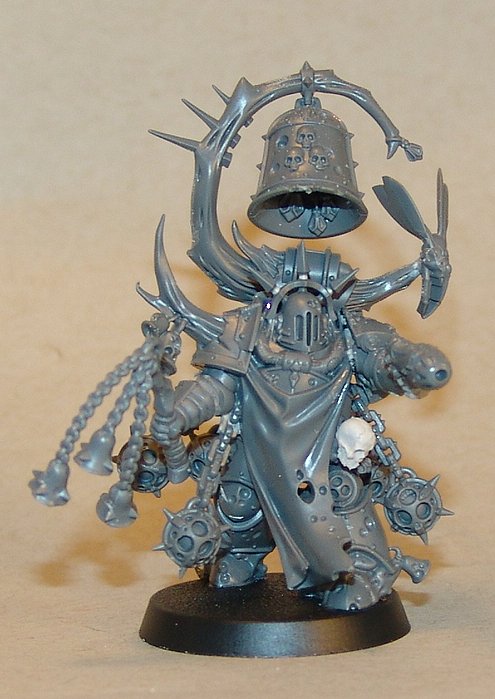 And last, but certainly not least... the Poxjoker.  "Wanna know how I got these scars?" 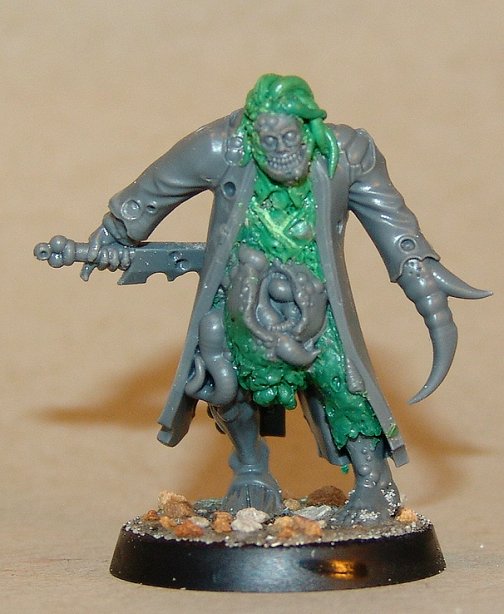 Noise Marines of The Faceless are on deck next for the challenge, then its on to painting.

Cheers Ya'll!
Posted by Rednekkboss at 9:33 AM No comments:

The Call of Chaos: The Corroded

The first unit of the Call of Chaos challenge is built.  7 plague marines. All based on minis from the Dark Imperium set.

The Champion is converted from the Plaguecaster 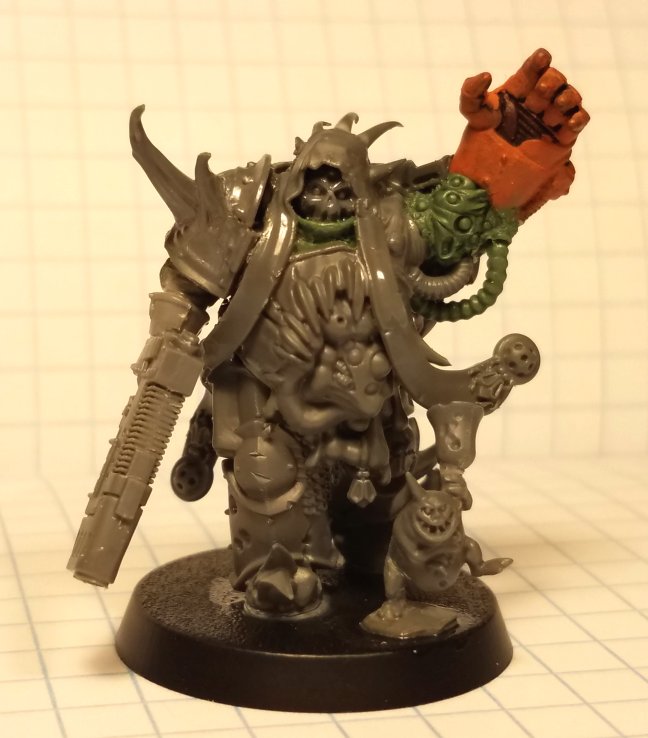 Expensive guy with a plasma gun and power fist. I was going to do a sword, but ran across half a powerfist in the bitz box and thought the "C'mon guys" look would be cool. A little greenstuff work and a face swap from the Blight Knights kit and there he is. Bell ringing nurgling leading the way.

Next up the blight launcher guy. 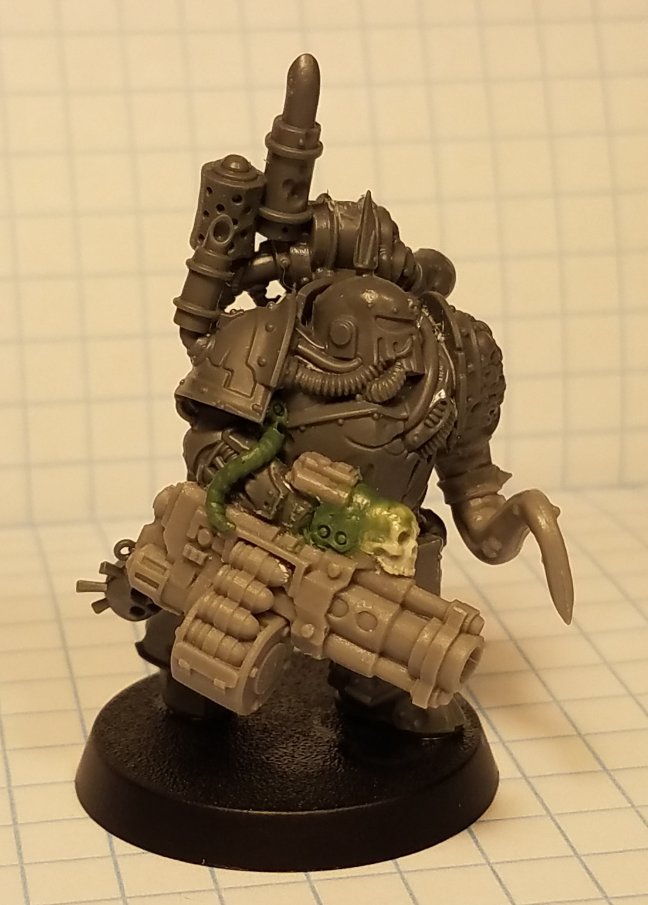 I was originally going to go with 2 plasma guns for this unit, but realized I didn't have much in the way of spare plasma, so I went with the frag launchers I had ordered from Anvil Industries.  Eventually there will be more plaguemarines. I just have to decide if I'm going to convert some from existing marines or get more than one of the new sets. The size difference is an irritating thing to me. I love the new minis, but hate the lack of multi-pose.  I do have a box of plaguebearers that is partially cannibalized, so I may build up some normal marines a little. they'll still be short, but I'm sure the tall guys will have lots of fun at their expense.

The rest. I LOVE the helmet on this guy and figured it needed to be on a runner, rather than a static plasma gunner. 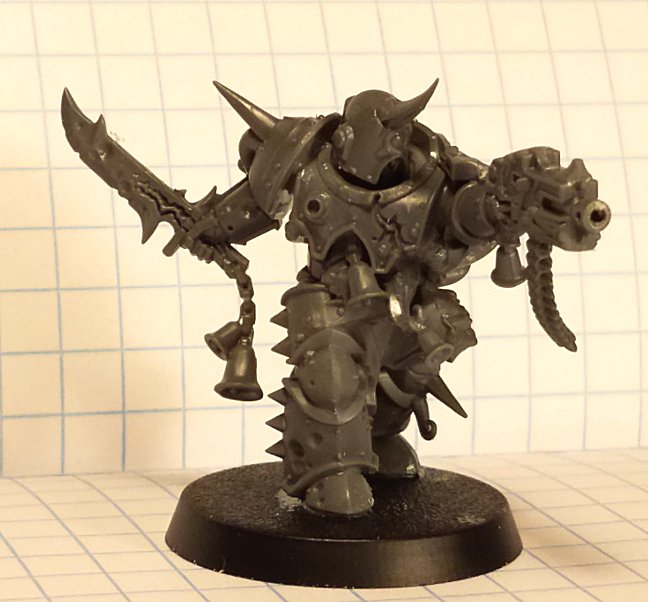 And the rest. A couple head swaps, but nothing major. 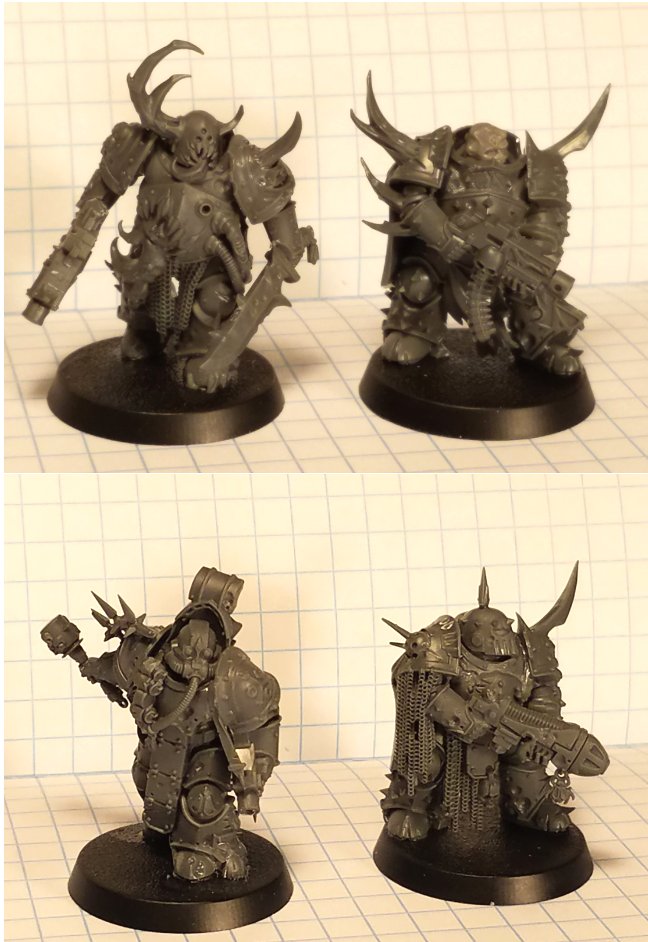 So that's the first unit for The Corroded, the plague arm of the Unyielding Eye of DOOoom. ^Noise marines are next up to build as well as finishing up the Hellbrute.  Plus an update on Ms. Charlotte.  A bit behind schedule on her, but there's been some real world things to deal with. But I have the next 3 days off, with a minimal "honey -do" list.  Lots of time for the hobby. The type of relaxation I sorely need right now. Should have an update @ Wednesday.

Being a glutton for punishment, I have entered another challenge at Bolter & Chainsword.  For this one I'll be building and painting the following before the Ides of December.

The humble beginnings, the rehabbed Hellbrute 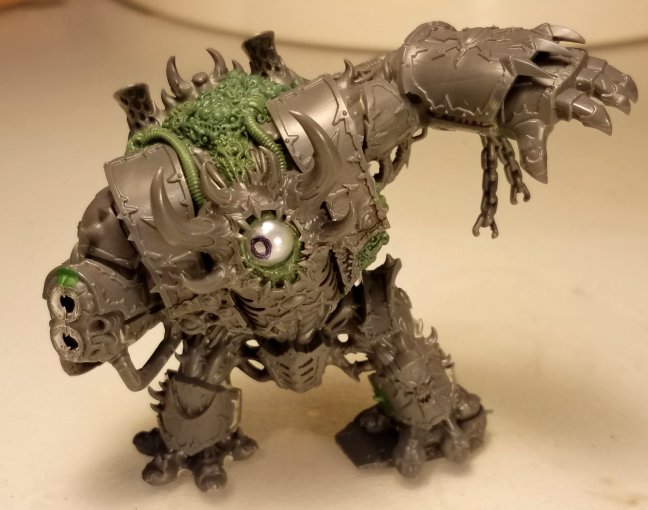 Lots more sculpting to do. Still deciding on a weapons load out, the fist might be replaced with a scourge.  Not sure yet. I have a Hellbrute kit and that one might be the close combat guy, while this one is more multi-role.  Leaning heavily toward a reaper cannon, but I really want to reposition the arm assuming I keep the fist. 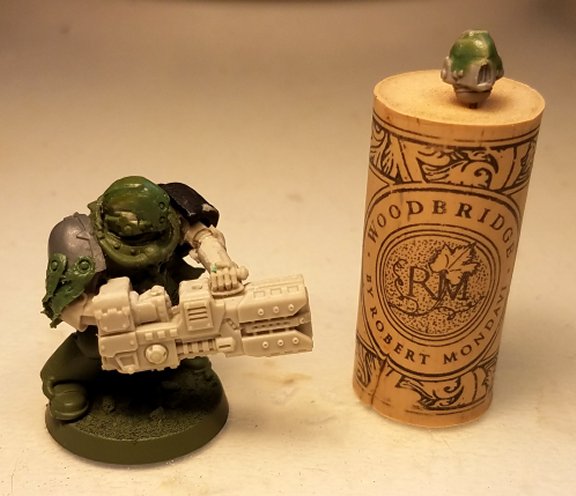 Blastmaster guy is very much underway. Started working on the helmet for the next guy. 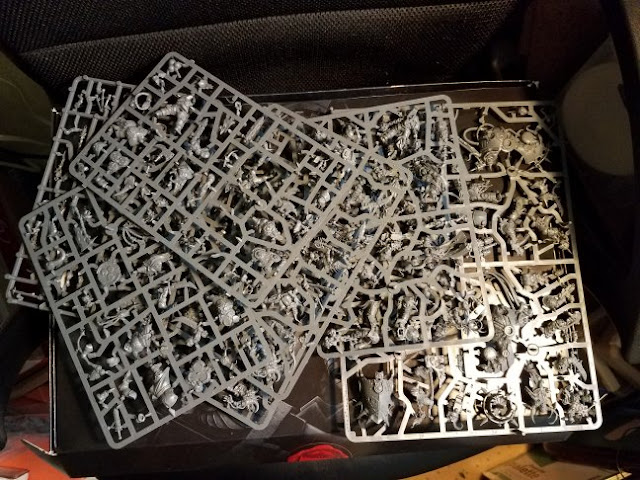 Still on the sprue, along with plaguebearer parts and Blightknight parts.  Should be a fun build.

The PLAN... is to have everything built by the end of October, giving me a month and a half to paint.  In the meantime, I'll finish up Charlotte (I got some more work done on her, but not too much to show yet) and a couple other easy paint projects, since I like to have a build and a paint project going at the same time. Gives me something to do while waiting for paint or greenstuff to dry. :)

Cheers Ya'll!
Posted by Rednekkboss at 8:46 PM No comments: 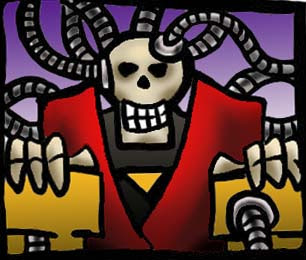 My fun/spoofy Warhammer 40k comic is now live at The Wyrdwood. So bookmark it and check in every week.  Originally I had planned some story arcs, but I'm forcing myself to do it all digitally (a new adventure for me) ... so the first few are liable to be quick jokes and the like.
CHECK IT OUT!  THAT's an ORDER!  Uh... please.

Update: Ms Charlotte is moving along nicely, going to put in 5-7 hours on her today and see if I can't finish her.  Then I have to do her base.

Got a bit sidetracked from my intended goal to get Ms Charlotte done by this point. Had to nurse an old injury , plus a couple other real world things that got in the way of hobby time.

I have completed all the gribblies on Ms. Charlottes sides as well as the rusty bitz and her lovely eyes. 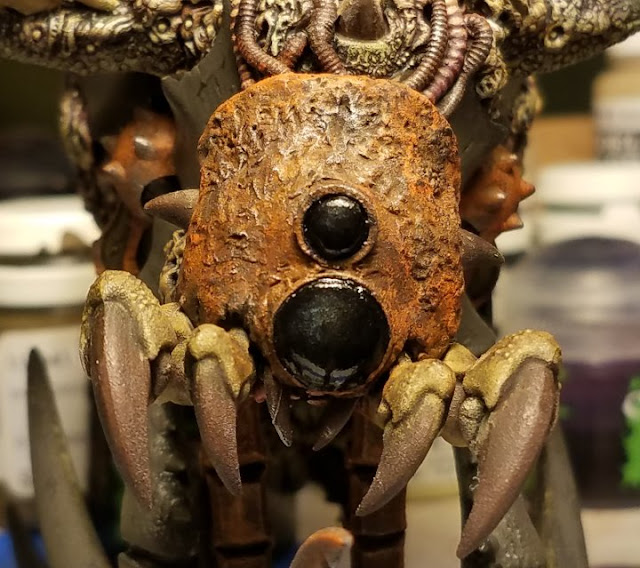 What is kind of neat painting this long after I sculpted it is seeing all the detail and warped faces in the mix. 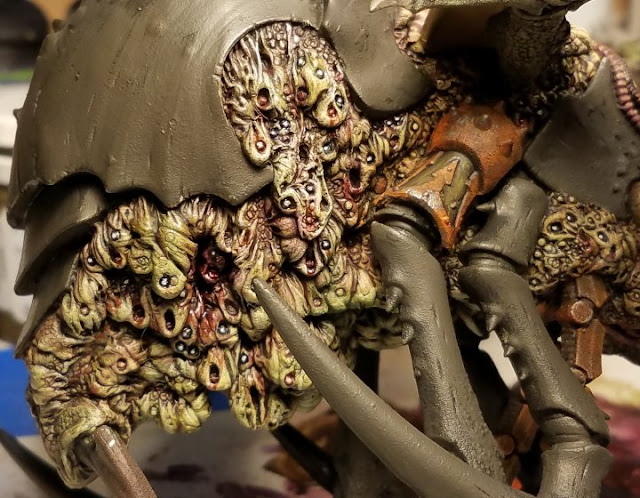 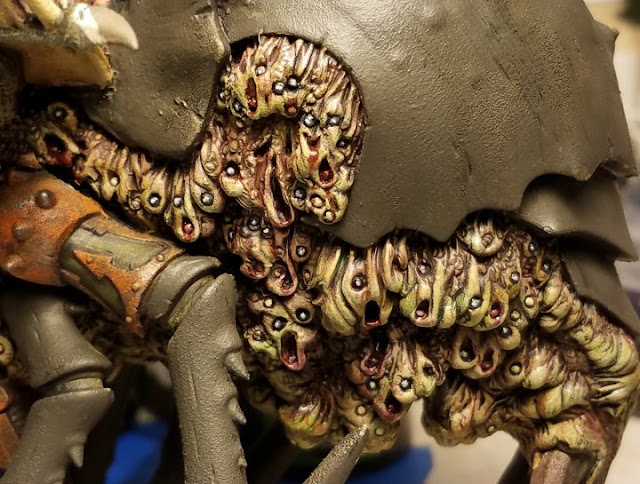 Now, on to the carapace.  Once she is finished its on to yet another Bolter and Chainsword challenge.  I have until December 15th to finish a hellbrute, 7 man Plague Marine team and a 6 man Noise Marine team.  So that's what will be on deck.... mostly. You know I can't resist having a couple things going at a time.  I'll probably sneak Ms Charlotte's base in there somewhere too. Hope to have her done in the next couple days.

OH....AND I'm on INSTAGRAM so if you are an instagramer, give me a follow.  My new phone (wife's hand me down actually) takes great pictures, so I'll be posting in-progress and workbench stuff that won't make it to this blog along with other silliness.