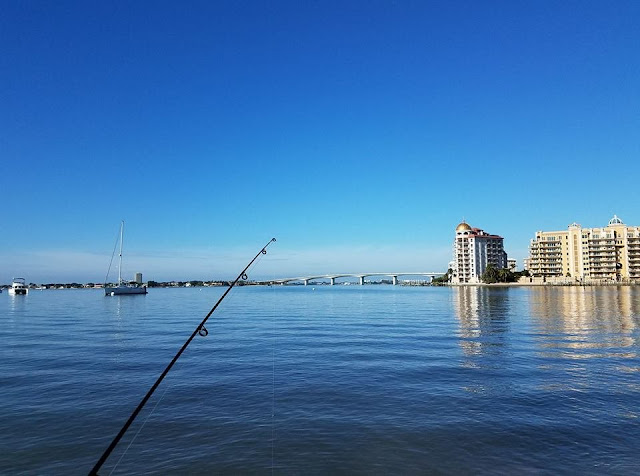 My annual chance at a little time away is always around the Thanksgiving holiday.  So, if you are in the US (or celebrating some other harvest festival where you eat too much elsewhere).... Happy Thanksgiving.  While the basis for our holiday (the whole pilgrim-indian story) is dubious when considering real history ( "Here! Have some food, since you knuckleheads can't seem to feed yourselves"  "Thanks! Here, have these blankets with smallpox.They are nice and warm. Enjoy the Measels and Mumps too, we are immune.")  I have always seen the root of it - the celebration of the harvest and being thankful for what we have- as the purest of holidays. 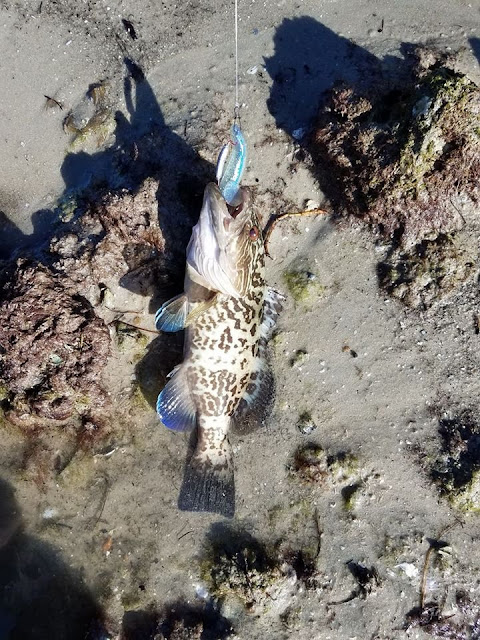 Small, but fiesty groupers were plentiful this morning.  I let them all go with a free lip piercing!

As for the hobby, it always gives me a few days away from current projects so I can look at them with fresh eyes. It gives me time to reflect on the future of my hobby, since  I don't play anymore I'm pretty much a pure hobbyist now.  And it also makes me thankful and humble that people not only like my work, but follow my blog and instagram,etc. Thank you all, from the bottom of my heart.

With the hell that is the Holiday season upon me (my part time job is in retail..... I SO need a new one) my hobby time will be limited, so I'm making some plans for 2018.  Here's the tenative plans, so far.....


Later this week I'll take a new look at The Corroded and see whether I want to keep the scheme or trash it. I think I might do a couple test models and post them for opinions, rather than procede with the whole squad. Then its back to Ms. Charlotte who is way too close to done, that she deserves to be finished.... and it will get my mind off my frustration with the Plague Marine schemes.

If you are celebrating the holiday, I hope you have a great one and eat too much turkey.

The first of The Corroded is done. Of course it was Poxion, the plasma gunner. I have a thing for plasma guns, which kind of makes 8th edition my "glory" edition.  If only I ever got to play. 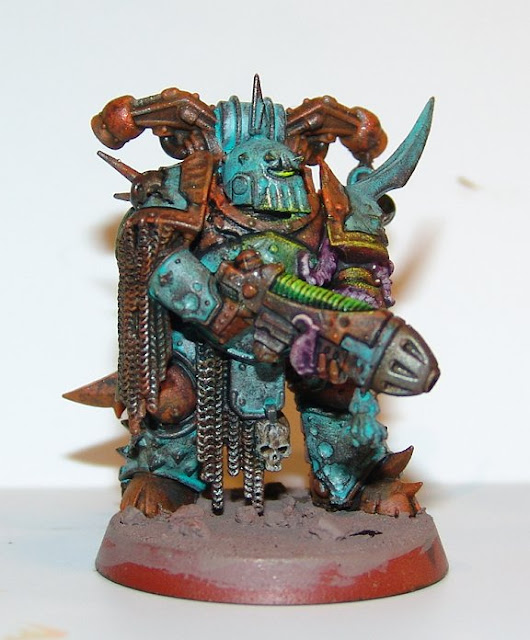 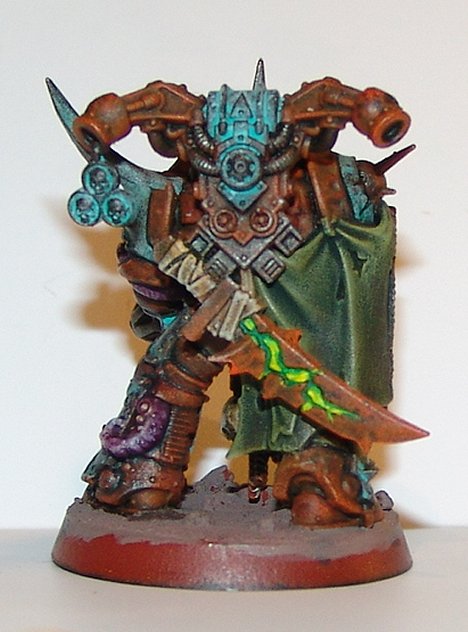 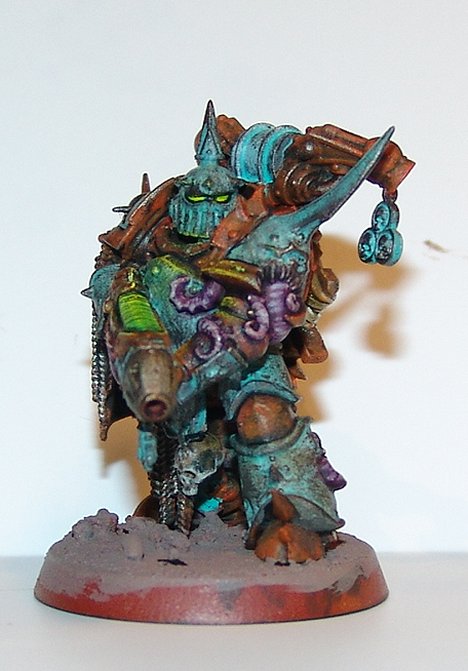 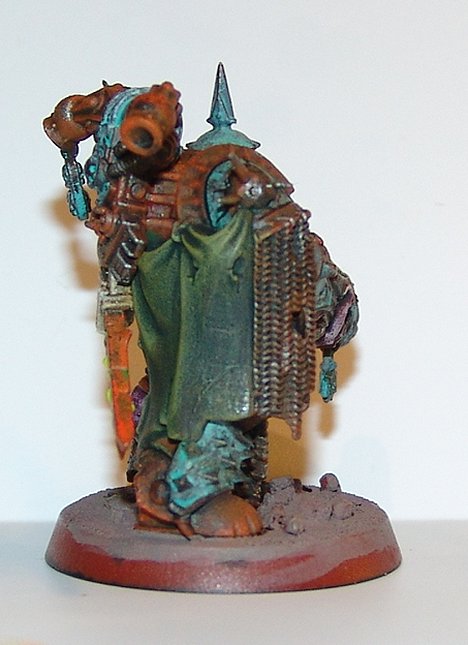 And then there's Buboa. He forgot his backpack (still in progress) 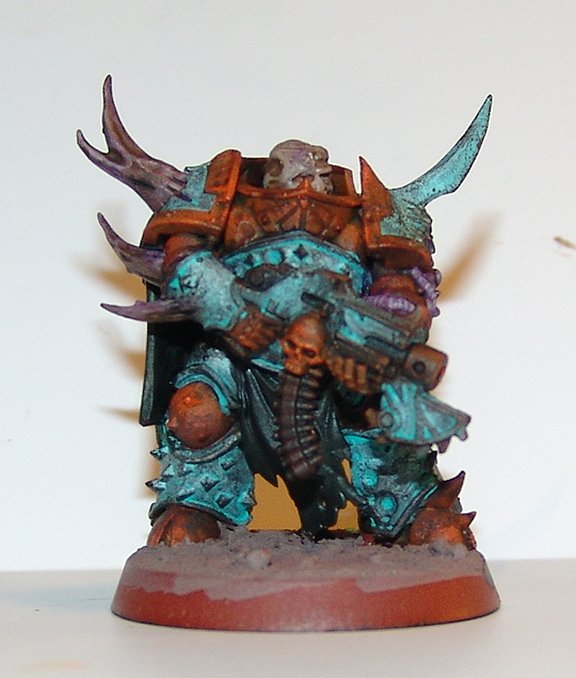 A friend of mine shared this picture her daughter took in New Orleans.  Obviously, the gateway to The Corroded's clubhouse there. Great reference photo. 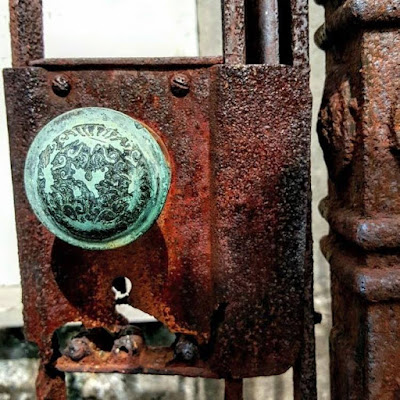 And some gratuitous plugging.  Catch me on Instagram RIGHT HERE . Some more in progress stuff and odds and ends that you won't see here.  You can also follow me on FACEBOOK.   Official website (which is still sort of under construction/constantly being added too) THE WYRDWOOD. Lots to come there. A store for stuff, stories, children's books, comics not actually for children plus pages just in case you want the ol' Rednekkboss to paint or draw something for ya! 2018 is going to be a busy, but exciting year. I'm excited to get back to freelancing after a hiatus.

From the Workbench: The Corroded...in color!

The color basics are laid in on the first squad (plus a couple) of The Corroded.  Another quick conversion for a hooded champion first. 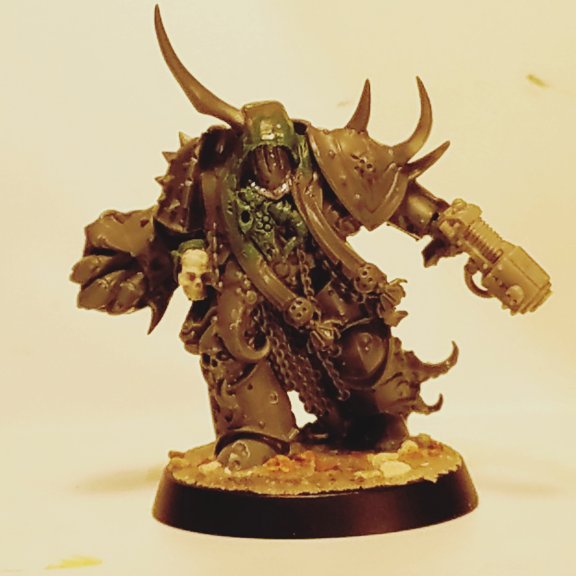 Chopped him up a bit, took off the ugly face. Snipped in a helmet. Then some greenstuff and a plasma pistol. Champion #2 - for the close combat oriented squad- is ready.  Here's the state of the desk.... 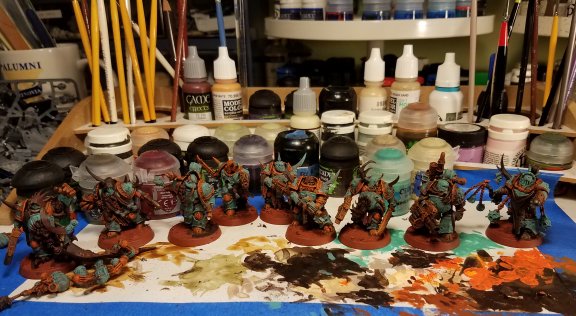 I decided to go all in on a slightly different rust approach. It cuts down a couple steps on my old approach, but with these models and this paint scheme its a bit more labor intensive because of the details.  So basically, I start with the dark brown I always use and then moved on to these new acquisitions..... (plus the verdigris technical medium) 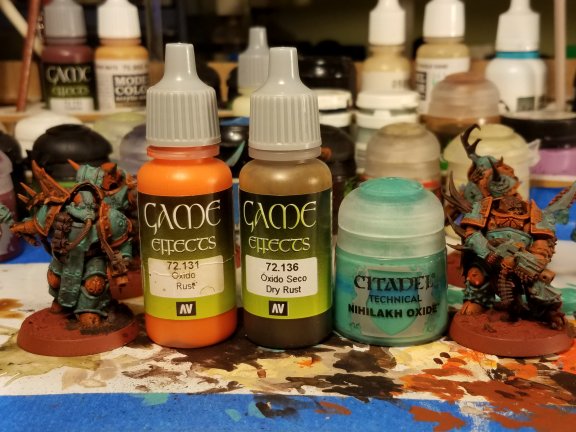 Overall paint with the Dry Rust, which is not unlike the GW Typhon Corrosion, but a bit thinner and less "muddy" and more "rusty". It dries very,very flat and looks wonderful on its own. Dry brushing or stippling the Rust over it in varied amounts comes up with a really nice look. 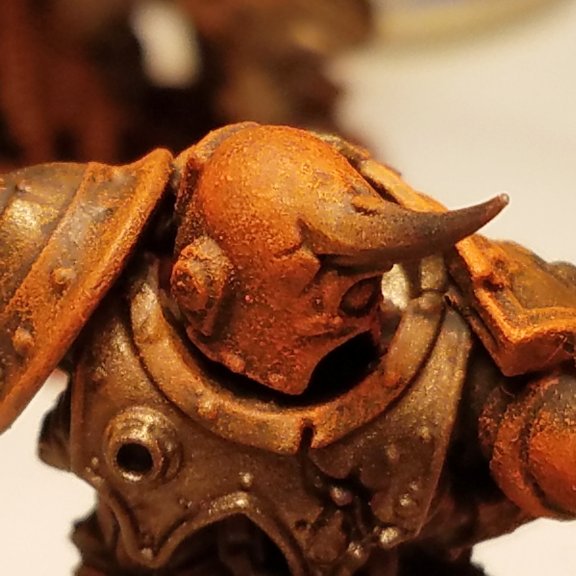 It might be my new "go-to". In the case of these particular models, which generally I like, though I'm not a huge fan of non-multi-pose models, do have a bunch of great details, but can be hard to get to once they are constructed.  Sure, you could paint them in sub assemblies if there isn't too much conversion work involved.... and I may do that with some of the close combat squad.  I'm sure I'll complicate the paint schem with detailing, but if one was wanting to do some really decent looking table-top quality models in a not so complicated way, I reeeeeeally, REALLY recommend these Game Color products. Outstanding.  And FWIW.... cheaper than GW.

SO, The Corroded.... rust and verdigris is the order of the day. So the non-rusty parts have a undercoat of game Color Tiny Tin (a wonderful bronze/dark metal base, by the way) then a wash of my dark brown/black to deepen the recesses.  Then I did a wash of GW Nihilakh Oxide. I absolutely adore this product. I'm almost as in love with this thing as much as I am Althonian Camoshade (and the other shades really- they are one of the best things GW has ever brought to miniature painting if you ask me)  I know, the same basic thing can be made with thinned paints, but the formula is perfect.  So here's the base colors.... 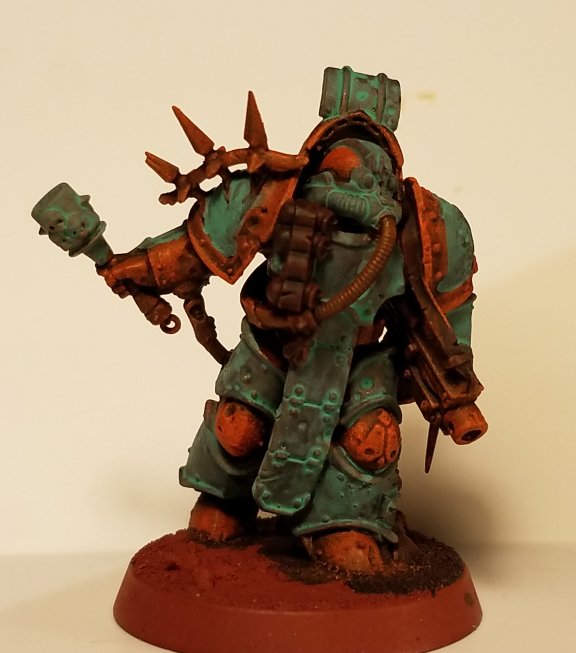 I'll now go in with and detail the verdigris with some mixed in white and bleached bone.  After that I'll "scrape the verdigris off" with some drybrush or stippling in the more raise places with the Tiny Tin. The end result should be a LOT like the bells on the Malignant Plaguecaster I did.  After that, it'll be doing all the details on the models. 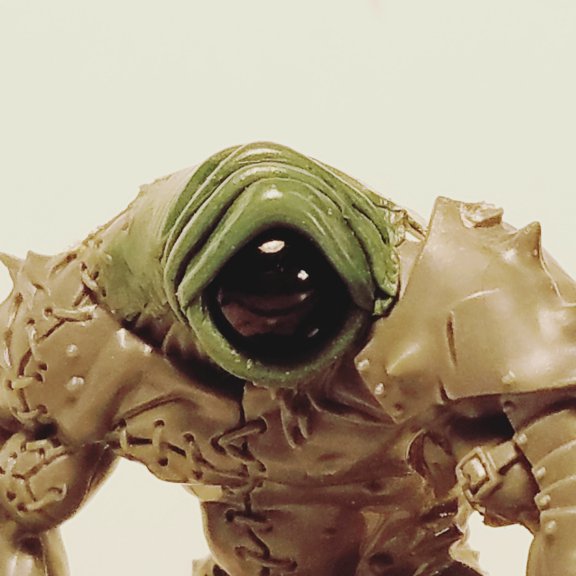 I've got 4 Rat Ogres that will be some sort of Spawn.  Sad Spawn.  They just want a hug.

The Call of Chaos: From the Workbench

Just a quick update on the Plague Marines and the Hellbrute. I'm planning a different paint scheme for "The Corroded"- basically verdigris/bronze and rusted iron.  Still working on the full back story, but it'll likely be cool and possibly ridiculous.  No spoilers, but the one for the Slaaneshi "Faceless" is coming along nicely, even if the models are in a bit of limbo at the moment.

So, for the Plague Marines I'm at the "blocking in undercolors" stage. Over a thin dark brown base coat I've painted in Tin Bitz for the bronze areas and some flat rust colors on the rest.  I'll likely pick out any fleshy bits next and fully paint them, then move on to the armor.  Its a few more steps than necessary, I'm sure, but I like the bronze showing under the verdigris.

Laid the same colors on the Hellbrute, but once I started slapping in the flesh colors, that got a bit messy in places.  Here he is after the first couple washes.The details show up great and I have to admit to being pleased with the results of all the filling and sculpting on this poor mistreated guy. 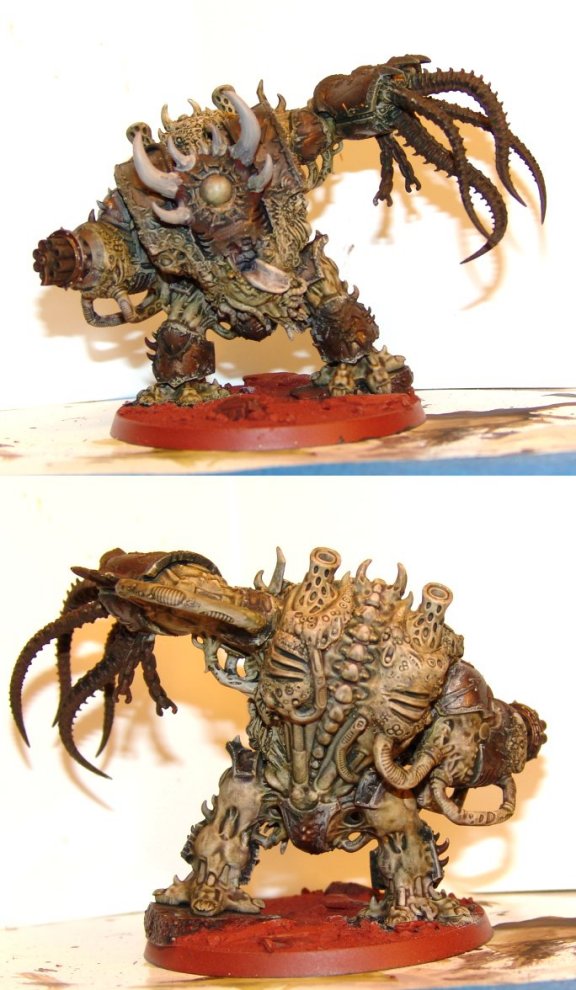 SO... lots more work to do. Got an evil plan in the works for the 2018 calendar year for models and comics. Hopefully ya'll will keep stopping by.  In case I didn't mention it, I'm Instagram right HERE  some of the stuff you'll see here, but there's in-progress stuff and more. If you Instagram, check it out!