More pictures.... but its finished. 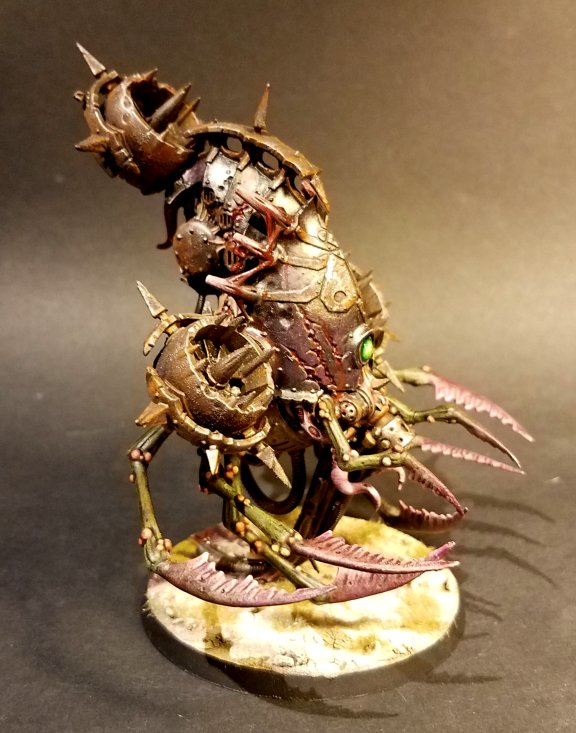 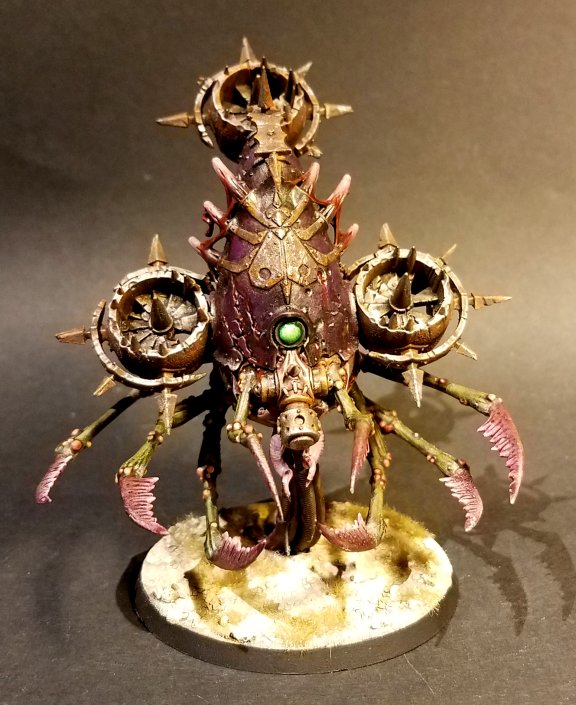 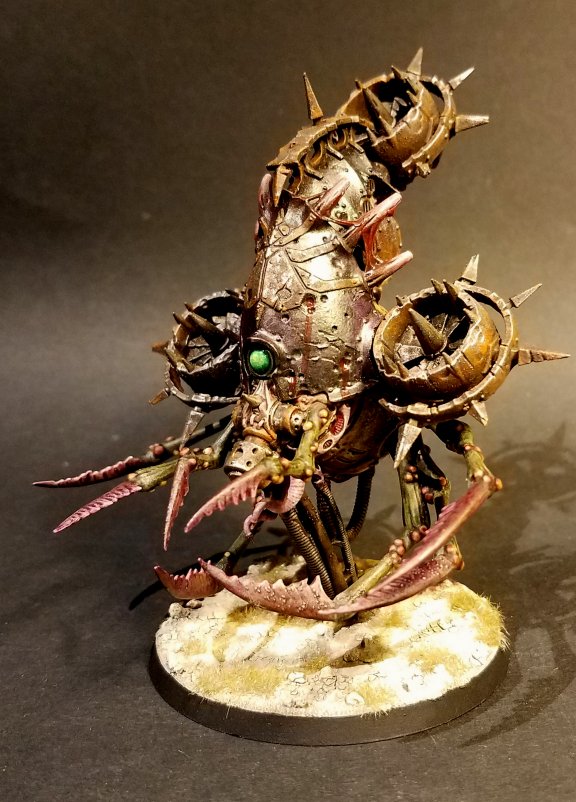 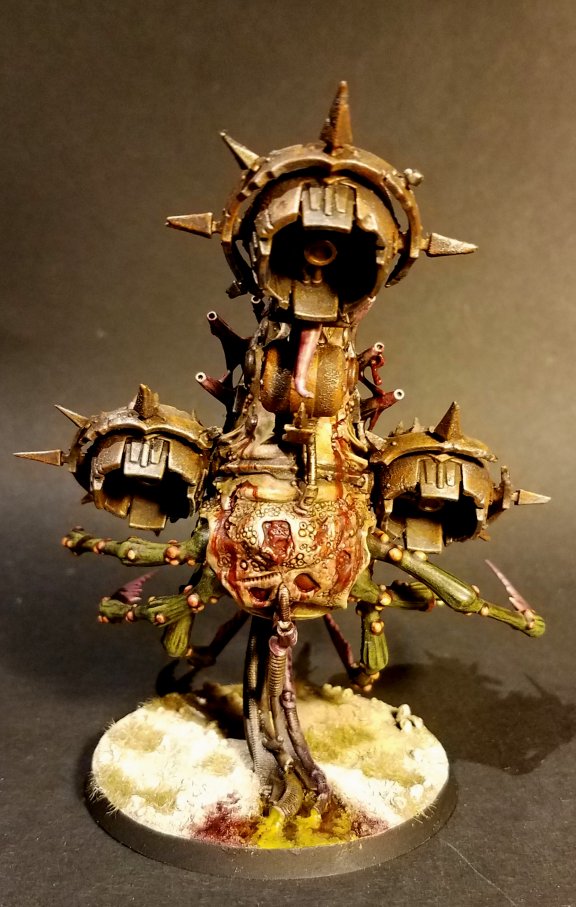 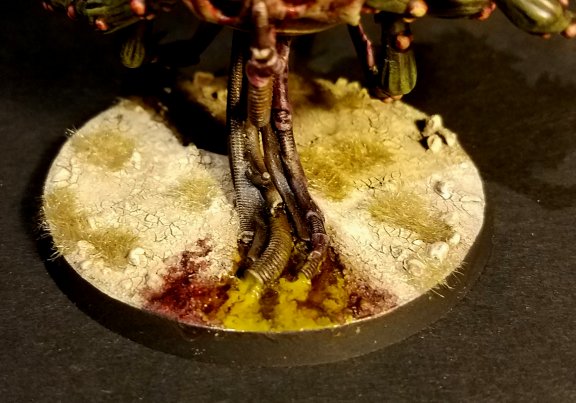 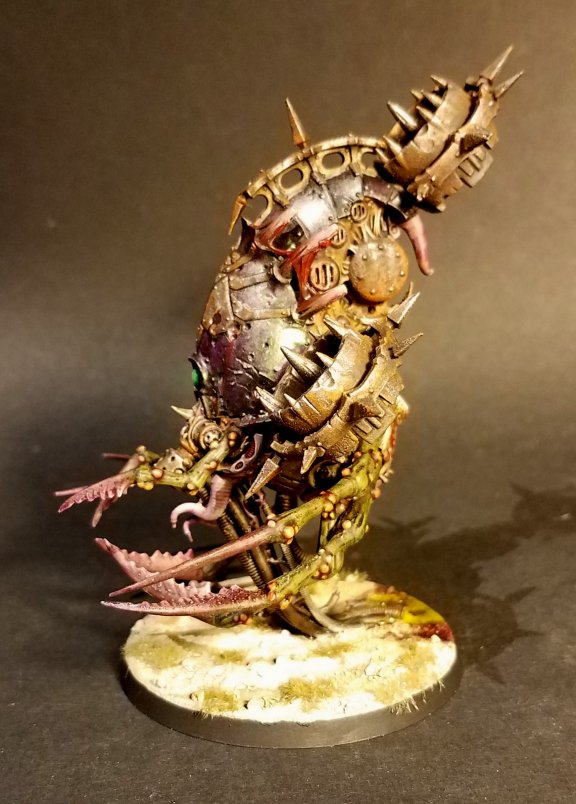 Next up, a Tri-lobe of Blighthaulers.  Then, something Orky!!

Cheers y'all!
Posted by Rednekkboss at 5:20 PM No comments:

That shine! The Fleshmower nears completion.

Aside from some detailing and finishing off the base, the Fleshmower is pretty much done.  I think I'll be toning down the blood a bit - mixing in some browns and the like, plus drippings on the base. The eye lense and a few other little things need finishing. 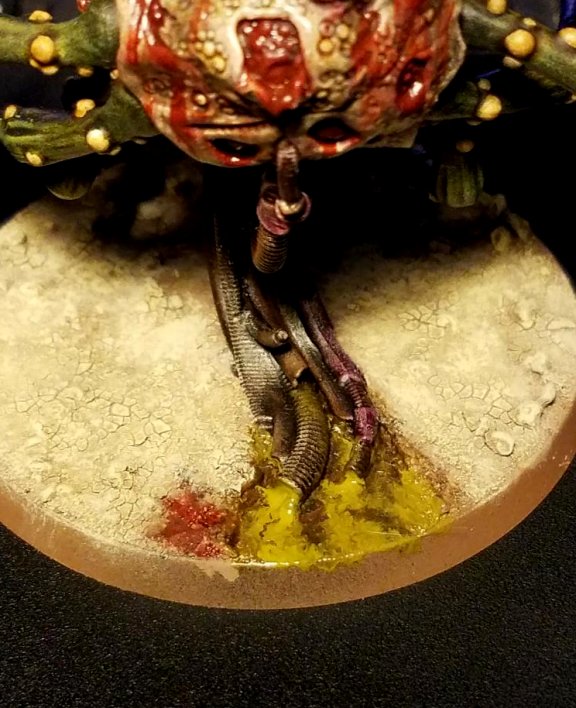 Overall, very pleased as this will set the tone for the last expansion of the Deathguard force- the daemon engines and vehicles. Something tells me I'll likely be adding plague zombies for...well, forever, since they are fun to build and paint.  But there is one more drone, terminators,  3 blight haulers, the mortar vehicle and maybe a land raider and/or rhino, depending on what I can resurrect from the junk pile of recently stripped "free" models I got a couple years back.  I will be adding a couple characters, one of which will be for a "patrol" force add on, so I can fit Ms Charlotte into the game for some much needed air support.

That's the plan as it stands.

In the long view, I'm planning to depart from Nurgle and challenge myself with new colors for a while. The next (final) version of the rest of my Chaos army will be a Slaanzeetch/Tzeenesh kind of force, with a wraith/ghosty/undead/horror theme. Blues, turquois,ghostly greens, purple and blacks.  Also a 10 man Khorne-Aztec berserker squad and a couple characters. Yup, Aztec berserkers. You read that right.

And then there's the Rednekkz 2.0. My Ork army will rise again.

So with all this planned I'm doing a bitz and kits inventory, getting rid of some stuff, trading some other stuff out, etc. If you are in the continental US and looking for short Space Marines, older metal Eldar models or fantasy high elves, drop me a note. My wife is selling her old army too!!

The ETL is usually one of the painting challenges I can complete, since its not at the holidays. Well, not this year.  Thanks largely to a hurricane and a double ear infection, (yes, I know....I really have to think about this whole "worshipping Nurgle" thing. The "blessings" aren't that fun).. I missed what looked like a gimme on the deadline.  It didn't help that it looked like we were going to take a direct hit from a massive hurricane at the beginning of the week, then it got dragged out to end up with basically a rainy day here. My prayers (and donations) go out to the folks of the Bahamas.  Check out the Bahamas Red Cross if you want to help them out. They took one hell of a beating from that storm.

Only 5 days late, I finished my Plague marine vow...and here they are.... 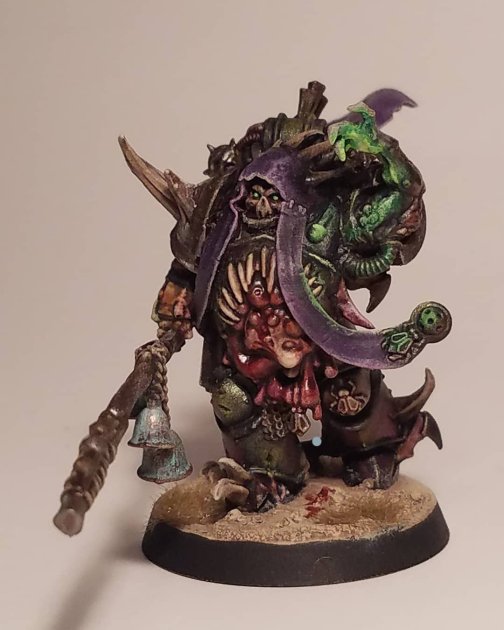 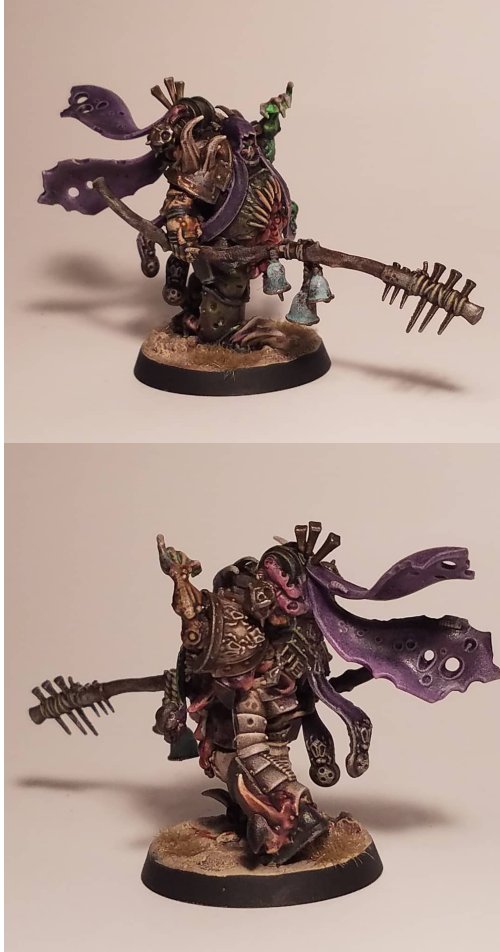 The Blight Bringer or Bellman... 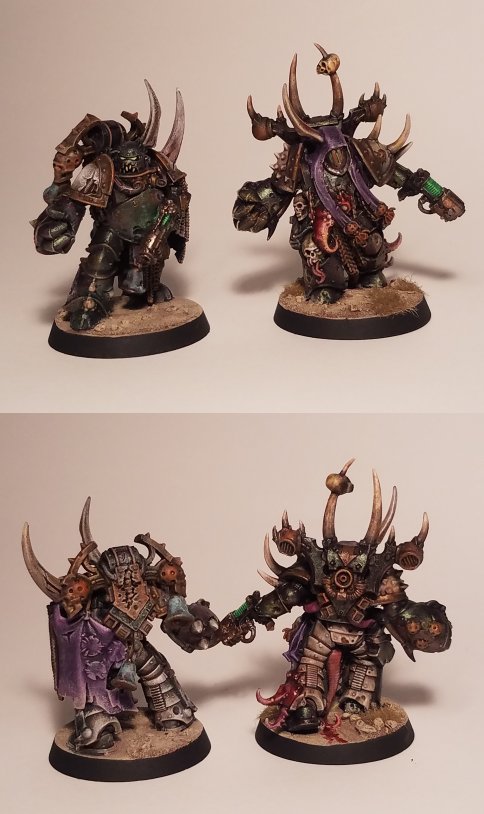 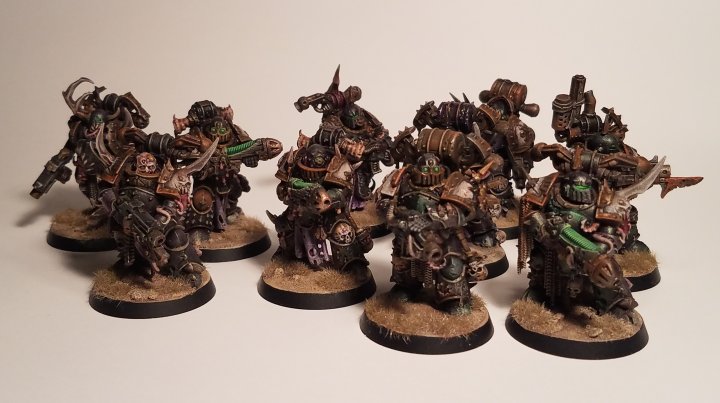 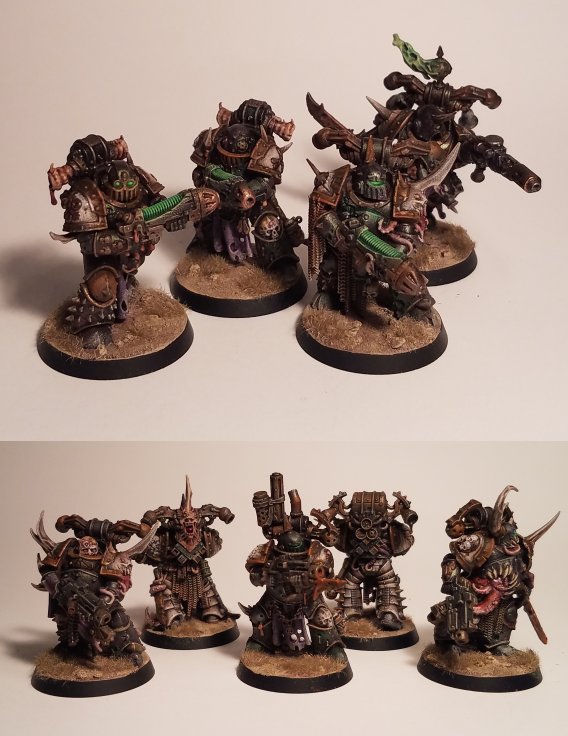 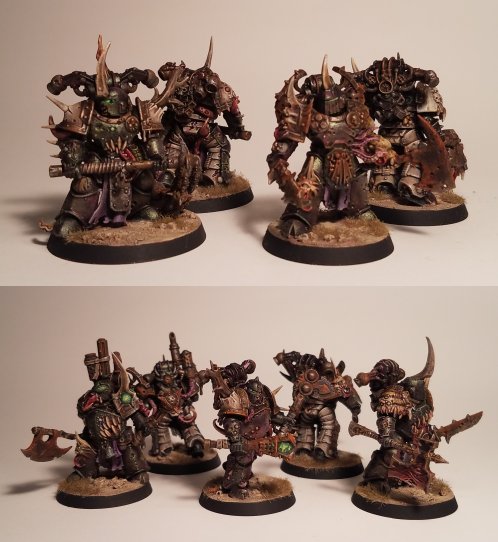 A couple of my favorites....

And there they are!  Its nice to have the core of my army painted.  There are some machines and deamon engines to go, so more to come. I also need to get a better close up on the metallic colors shift.  Not sure I'm digging the white background and the new light bulb. I'll have to tinker with it a bit.  So look for that in the near future.

I've got some work on the Fleshmower done, usually as I was waiting for stuff to dry on the plaguemarines, so here's his current state. 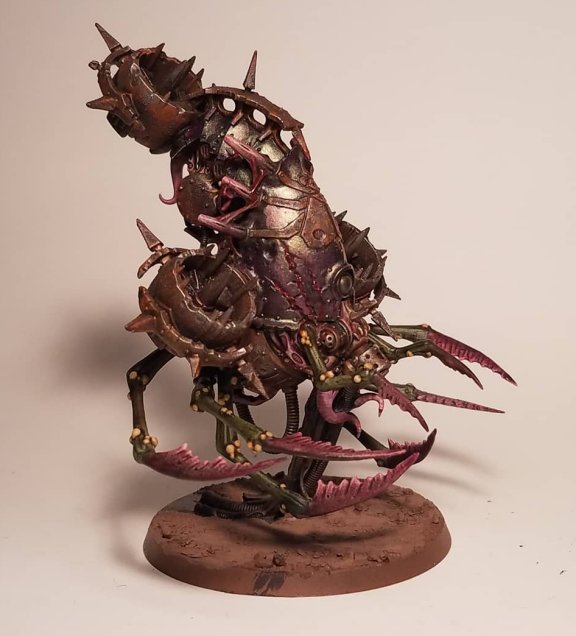 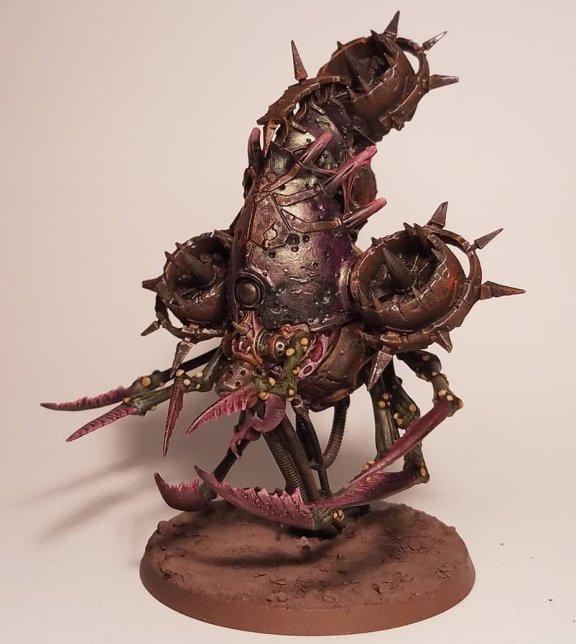 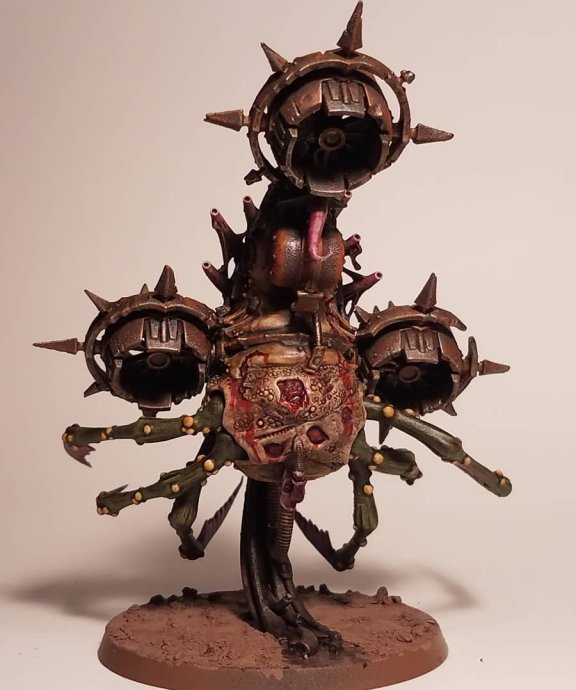 Lots more grossness and detailing to do on him.  The carapace actually plays the light well.  I'll goof around with the camera and set up and get some better pictures of that on the next update, which will be a LOT sooner than the last one, though I am sneaking out of town next week for a couple days... hopefully to get in some fishing while visiting family.

That's all for now!
Cheers y'all!!
Posted by Rednekkboss at 9:44 PM No comments: