Here's what I've been up to in between life's obstacles.
First off we have new additions to the Dreadnaught stable. Venerable Brother Stalwart in all of his Plasma wielding glory is in the process of being painted and suitablly weathered. 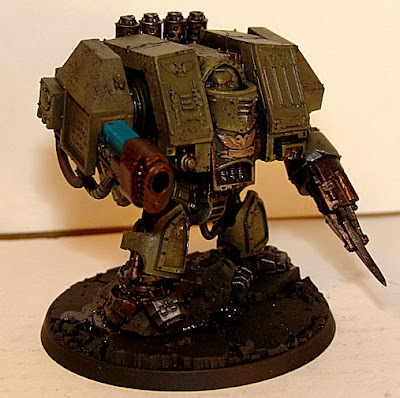 Then on to Revered Brother Orkin, seen here with his signature "Critter Ridder" arm. Kills bugs dead...at least the little ones, the eagle headed seismic hammer is there for the bigger ones. 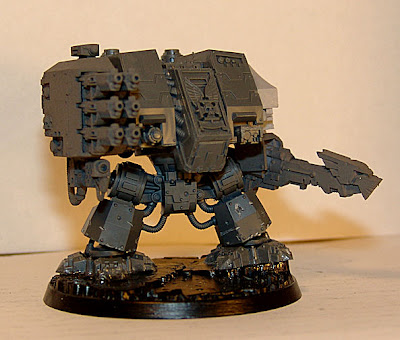 Then... from the depths of history (and the bitz box) comes Revered Brother Not-Yet-Named, who is an oldy but a goody. I'm still not 100% sure how he will be kitted out. I do have about a half dozen extra dreadnaught arms, but the metal dreads have bigger arm fixtures. Also, somewhere..... there are the original arms to this old Furioso, so he may end up as my second ironclad.  I like the thought of him being a close combat dread, not only because he weighs a ton, but he's a little shorter than the other lads so he's got something to prove. Those little guys always do. 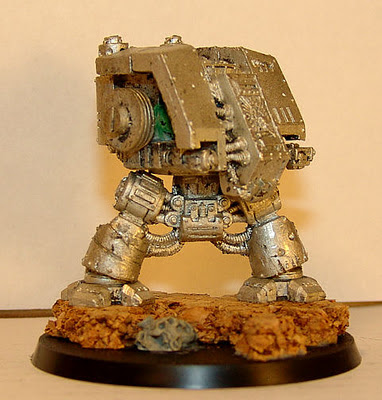 Next..... we have some Painting in Progress on the objectives which are about 90% done. 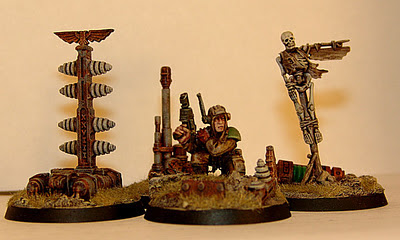 And.... to use all of these dreadnaughts, I'll need a Master of the Forge. I've magnetized the multi armed backpack, but something tells me it'll take more than that 1 1/8 magnet to keep it in place once the arms are on, but I figure it'll make painting and general storage to have the backpack removable. So...a work in progress on him. 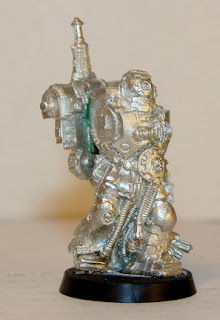 And finally.... a bit of a tease on the Captain Shrike conversion I have underway.  The jump pack.... 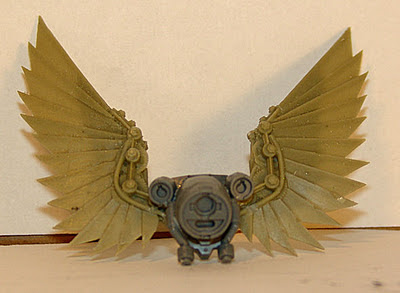 Sorry for the delay of late. Real life seems to have gotten in the way of the hobby.  Aside from some near crippling migranes, which I get from time to time, work and basically everything else from lawn work to car repairs seems to be in the way.  HOWEVER.... I have managed to get some stuff done.... but of course, the camera is charging so pictures tomorrow.

I've also gotten "political"...sort of.. I've begun work on a comic titled "Occupied" that gets a few digs on pretty much everyone. Think Bloom County meets Occupy Wall Street meets the ridiculousness of the American political process these days meets talking house pets and zombies. So that's been a little distraction. I had originally planned a webcomic for the first of the year, which was going to be more of a Warhammer thing, but this whole "Occupy" thing (among other things)is just too good of an opportunity.  I'll be posting links to my "Occupy Donut Shops" Blog (or you can search for it). Hopefully the comic will be up and running with a fortnight.

Stay tuned for pics of my ever growing Dreadnaught stable with Revered Brother Orkin (with his pattented "Critter Ridder" arm) and Venerable Brother Stalwart. Then we have the beginning of (the as yet unnamed) Master of the Forge. The "to do " list includes the Shrike conversion (which I have the backpack done for) and two unmarked Drop pods that I plan to use in more than one army, because I am poor. :)
Posted by Rednekkboss at 7:14 PM 1 comment:

Regrettably, my migranes have slowed down my progress on this stuff, not to mention keeping me from playing the Wednesday night league the last 3 weeks. But, I did get something done.  Revered Brethren Amos and Gatling are finished. 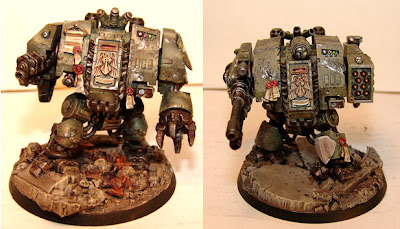 And the objectives are well underway and very close to done, with the exception of painting the injured tank crewman. 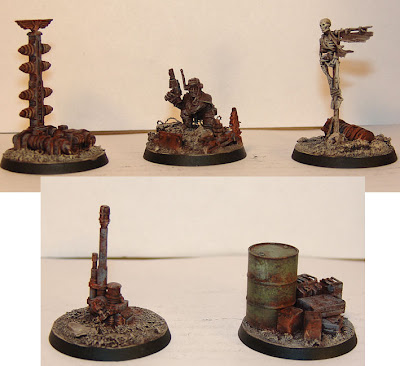 That's all for now. Assuming my head cooperates, I should have some more around Sunday or so.
Cheers, ya'll!
Posted by Rednekkboss at 8:27 PM 2 comments: